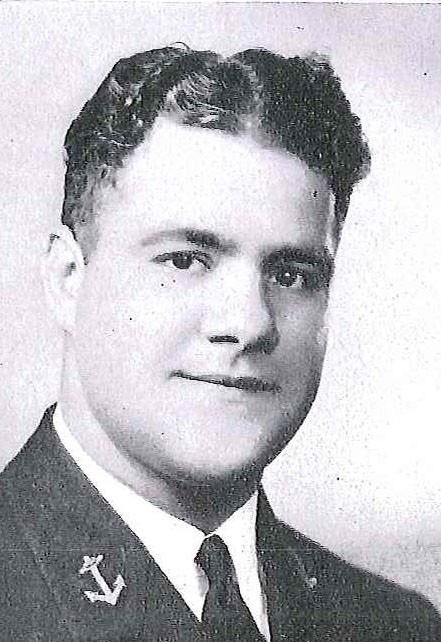 Maurice Ferrara was born in New York, New York, on June 15, 1914, son of Joseph and Rose (Castilla) Ferrara. He was graduated from Wingate Junior High School and Stuyvesant High School on New York City, and attended Long Island University briefly before entering the USNaval Academy from his native state in June 1933. As a Midshipman he participated in athletics, winning his letters in football, wrestling, boxing, and track; was a member for three years of the Executive Council, Naval Academy Christian Association; received the Naval Interpreters Certificate for Spanish; and belonged to the Musical Club and N-Club. Graduated and commissioned Ensign on June 3 1937, he advanced progressively to the rank of Commander to date from July 1, 1949.

After graduation from the Naval Academy in June 1937, he served for two years in USS Nevada, operating with Battleship Division One, Battle Force. In July 1939 he transferred to USS Balch, flagship of Destroyer Squadron 6, Battle Force, and from July to September 1940 served in USS Chicago, flagship of Cruiser, Scouting Force, and Cruiser Division 5. Ordered to the Submarine Base, New London, Connecticut, he had instruction at the Submarine School there, until December 1940, qualifying for submarine duty.

In July 1944 he assumed command of USS Gar (SS 206), and remained in that command until December 1944. For heroism during the fourteenth and fifteenth War Patrols of the Gar, he was awarded the Bronze Star Medal with Combat “V,” and the Legion of Merit with Combat “V,”, respectively. The citations follow in part:

Bronze Star Medal: “For heroic service… from November 3 to 30, 1944. A skilled and inspiring leader, (he) completed two extremely hazardous special missions during which time his vessel was engaged in delivering supplies to guerilla forces in the Philippines Islands. On one occasion, he contacted an enemy vessel of 1,000 tons and….. Succeeded in sinking this ammunition-laden craft…”

Legion of Merit:  “…. During the Fifteenth War Patrol of USS Gar in the Philippine Islands Area from December 4 to 18, 1944…. (he) daringly maneuvered his submarine close into enemy-held positions to complete an important and special mission and, evading hostile countermeasures, brought his ship and crew to port…”

Detached from the Gar in December 1944, he commanded USS Tambor (SS 198), throughout the remaining months of the war and until January 1946 when he was transferred to command of USS Finback (SS 230). He continued in that command until June 1948 and in July reported as an instructor in the Naval Reserve Officers Training Corps Unit of the College of the Holy Cross, Worcester, Massachusetts, to serve for three years.

On June 25, 1951 he reported to the Fleet Sonar School, Key West, Florida, for instruction preparatory to commanding USS Gearing (DD 710).