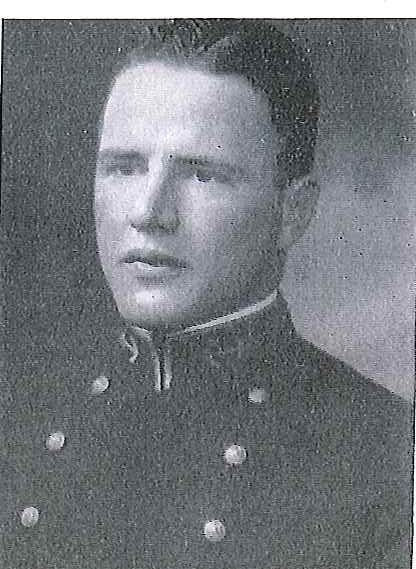 Otis John Earle was born in New York, New York, on August 4, 1908, son of John H. and Etta Grimm Earle. He was graduated from High School in New York City and attended Werntz Preparatory School, Annapolis, Maryland, before entering the US Naval Academy on August 7, 1926, on appointment from New York. Graduated (B.S.) and commissioned Ensign in the US Navy on June 5, 1930, he subsequently attained the rank of Captain, to date from April 29, 1949, having served in that rank (temporary) from January 4, 194 until January 1, 1948. He was transferred to the Retired List of the Navy on January 1, 1958.

After graduation from the Naval Academy in June 1930, he was assigned to USS Cincinatti, and served as a junior officer in the Engineering Department of that cruiser of the Atlantic Fleet for fourteen months. He had engineering duty in USS Leary and USS Humphreys, destroyers of the Pacific Fleet, and after attending the Submarine School, New London, Connecticut, from January to June 1933, had successive duty in the submarines R-2 and R-10 in the Atlantic Area, during the year to follow.

For three and one-half years he served in USS S-40, with duties as Egineer and later  Executive Officer, and from June 1937 until May 1940 was a student at the Naval Postgraduate School, Annapolis, and Massachusetts Institute of Technology, Boston, Massachusetts, receiving the degree of Master of Science in Mechanical Engineering Design from the latter. In June 1940 he joined USS S-43, to serve as Division Engineer, Submarine Division 11. In December 1940 he was transferred to duty as Squadron Engineer, Submarine Squadron 3, and was serving in Panama waters at the outbreak of World War II.

From August until December 1942 he was on board USS Drum, a submarine of the Pacific Fleet, as a Prospective Submarine Commanding Officer, and the next year commanded USS Stingray. "For distinguishing himself by meritorious conduct in action in the line of his profession as Commanding Officer of a US Submarine during a War Patrol of that vessel from 2 April 1943 to 17 May 1943…" he received a Letter of Commendation, with Ribbon and Combat "V," from the Commander in Chief, Pacific Fleet. The citation further states:

"Through his expert seamanship and navigation, he successfully executed a special mine-laying mission close to the enemy coast line. After accomplishing this, he intercepted and launched aggressive torpedo attacts [sic] against an escorted enemy convoy, sinking a freighter of 7,503 tons. His skillful evasive tactics enabled him to avoid strong anti-submarine measures and bring his ship safely back to port…"

Transferring to the Atlantic Area, he commanded USS Barracuda December 1943 until August 1944. The last year of the war was spent on the Staff of Commander Submarine Squadron 24, as Coordinator of Refits, under Submarine Administrative Command, Pacific, at Midway, and as Squadron Engineer. He was awarded the Bronze Star Medal, with the following citation:

"For meritorious service as Squadron Engineer of Submarine Squadron TWENTY FOUR, during operations against enemy Japanese forces in the Pacific War Area from November 2, 1944, to September 2, 1945. Serving with distinction throughout this period, Captain (then Commander) Earle coordinated tender and relief crew repair facilities and maintained submarine supply functions at the Peak of efficiency, thereby contributing to the successful prosecution of submarine warfare in this area. His professional skill and devotion to duty throughout this period were in keeping with the highest traditions of the United States Naval Service."

From October to December 1945 he served as Squadron Engineer on the Staff of Commander Submarine Squadron 17, and during that period was Submarine Administrative Command Representative, at Tiburon, in the Pacific. Before leaving the Pacific Area, he commanded USS Cortland (APA-75) briefly, and in March 1946 reported to the Navy Department, Washington, DC, for duty in the Bureau of Ships as Deputy Head, later Head of Section 517. He was detached in November 1947, and during the thirty months to follow served as Repair Officer, and later as Head of MP&R Division, at the Naval Shipyard, Pearl Harbor, TH.

After his return to the West Coast in May 1950, he served as Material Officer, San Diogo [sic] Group, Pacific Reserve Fleet. Detached in March 1952, heereported [sic] to the Norfolk Naval Shipyard, Portsmouth, Virginia, for duty as Shop Superintendent. Two years later he returned to the Navy Department, assigned first to the Office of the Chief of Naval Operations, and from September 1955 to April 1956 to the Bureau of Ships. He then became Inspector of Machinery, USN, Westinghouse Electric and Manufacturing Company, Essington.

On October 17, 1957, Captain Earle was ordered to the Office of the Supervisor-Inspector of Naval Material, Southeastern District, Upper Darby, Pennsylvania, where he served briefly before his retirement became effective on January 1, 1958.