A city in Ohio.

After a shakedown cruise off South America, Cincinnati joined the Scouting Fleet in June 1924, for operations along the Atlantic coast and in the Caribbean. With this force, she joined in fleet maneuvers in the Pacific and off the Panama Canal Zone in spring 1925, then resumed Atlantic and Caribbean operations until early in 1927.

On 17 February 1927, Cincinnati sailed from Balboa, C.Z., for duty in the Far East, based at Shanghai until October, then at Manila, and again at Shanghai from February 1928 to April. On the long cruise home to the east coast, she joined in exercises off Oahu and, carried men from Honolulu to Corinto, Nicaragua, returning to Newport, R.I., 25 July 1928, for operations on the east coast until 1932.

Early in 1932, she joined the Battle Force, U.S. Fleet, in the Pacific, taking part in the Fleet's cruise to the east coast between April and July 1934 for the Presidential Review of 31 May at New York. Returning to the west coast, she operated on summer training cruises for naval reservists from 1935 to 1938, then was reassigned to Atlantic duty during 1939. 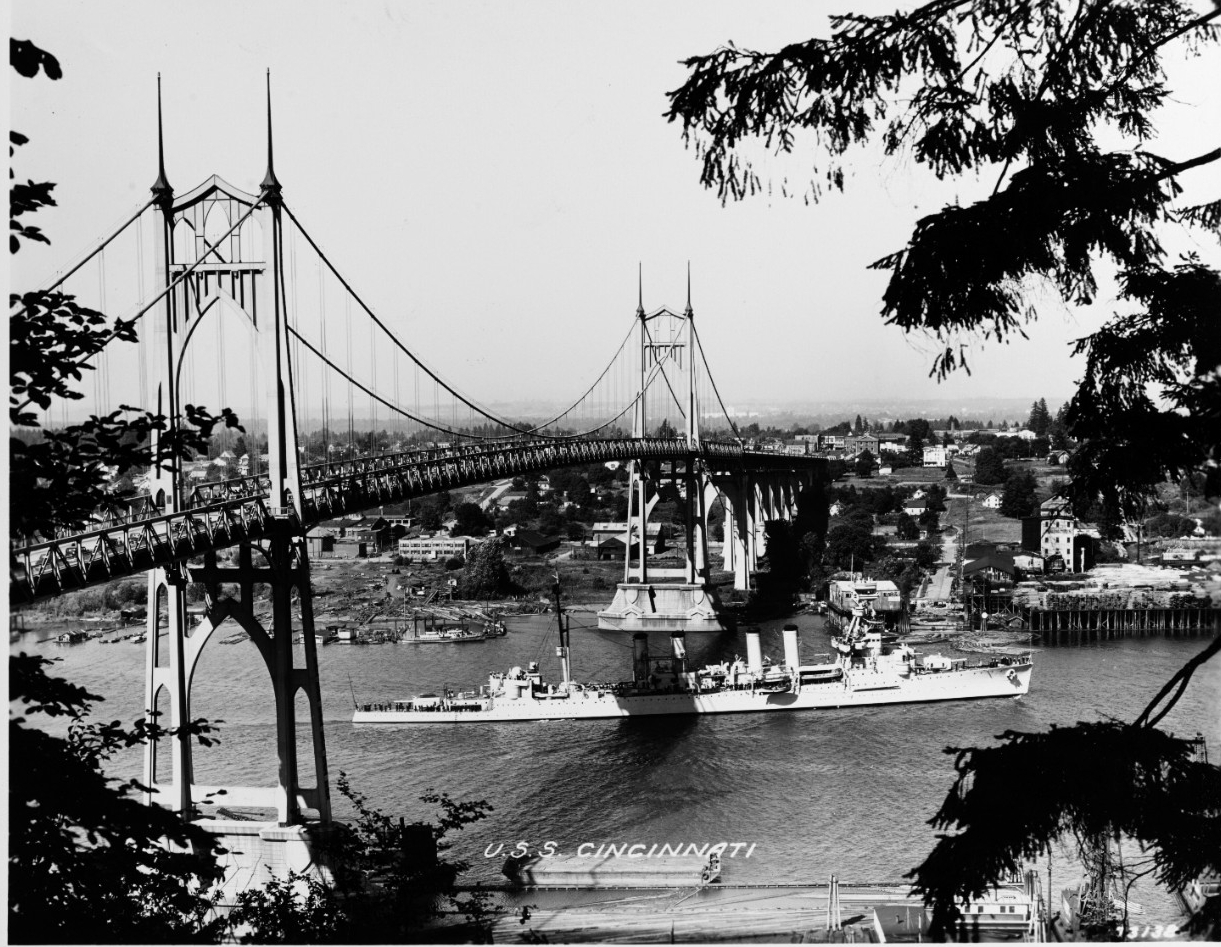 Cincinnati was based at Pearl Harbor from April 1940, voyaging to Guam and the Philippines on transport duty at the close of that year. In March 1941, she returned to the Atlantic, and joined in the ever-expanding patrol operations in the western Atlantic. Upon the outbreak of war, she continued patrols and convoy escort assignments in the western Atlantic and Caribbean, blockading French men-of-war at Martinique, and searching for German blockade runners. With Milwaukee (CL-5) and Somers (DD-381), Cincinnati discovered one of these, SS Annaliese Essberger, on 21 November 1942. The German crew scuttled their ship, but a boarding party reached the ship in time to discover its identity and take all 62 crew members prisoners before the blockade runner sank.

Overhauled at New York early in 1944, Cincinnati served as escort flagship for the crossing of three convoys from New York to Belfast between March and July 1944, guarding the passage of men and equipment essential to the invasion of Europe. On 28 July, she sailed from Norfolk to patrol the Western Mediterranean during the time of the assault on Southern France, and returned to New York 9 September. After overhaul, she joined the 4th Fleet at Recife, Brazil, 17 November, and patrolled South Atlantic shipping lanes until the close of the European phase of the war.

In the summer of 1945, Cincinnati carried midshipmen on two training cruises, and on 29 September arrived at Philadelphia, where she was decommissioned 1 November 1945 and scrapped 27 February 1946.