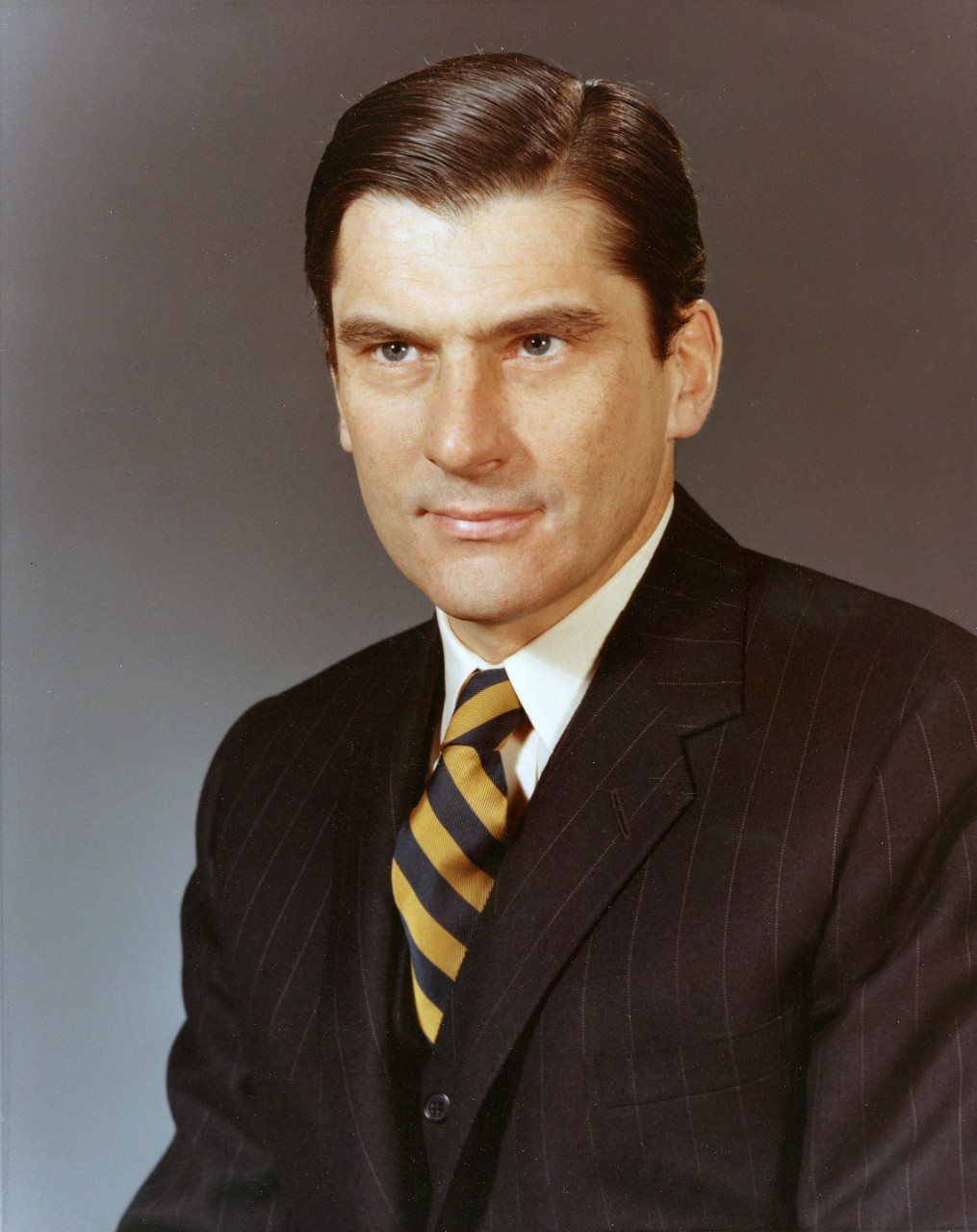 John William Warner was the Secretary of the Navy from 1972 to 1974 and then was a five term US Senator from Virginia (1979-2009). He was born 18 February 1927 in Washington, DC. His father was the late Dr. John W. Warner, a physician, whose family came from Amherst, Virginia, and his mother, Martha (Budd) Warner, came from St. Louis, Missouri.

He received his early education in the public schools in Washington, DC, and, following a tour of active military service in the US Navy, entered Washington and Lee University, Lexington, Virginia, in September 1946. He majored in general engineering courses, physics and mathematics, and received his BS Degree in June 1949. The following September he entered the University of Virginia Law School. His law training was interrupted for a second tour of active military service, this time with the United States Marines, and he graduated from the law school with an LLB Degree in 1953.

Mr. Warner enlisted in the Navy in December 1944 at the age of 17 and was released from active duty in June 1946. He attained the rank of Electronic Technician Third Class, following completion of a 14-month course in electronics, which concluded with graduation from the school at the Naval Research Laboratory, Washington, DC. He subsequently enlisted in the US Marine Corps Reserve and was called to active duty as a Second Lieutenant in October 1950. After a tour of duty in Korea serving as Communications Officer for Marine Attack Squadron VMA-121 and later as Communications Officer for Marine Air Group 33, he was released from active duty in April 1952. He attained the rank of Captain and remained in the Marine Corps Reserve until 1961.

Upon graduation from law school, he was appointed law clerk to the Honorable E. Barrett Prettyman, former Chief Judge, US Circuit Court of Appeals, District of Columbia Circuit. He was admitted to the Bar in April 1954, and following a brief period in private practice was appointed a Special Assistant to the US Attorney in 1956 and in 1957 was appointed Assistant US Attorney, Department of Justice. He served as a trial lawyer in the US Attorney's Office, Washington, DC, until April 1960, when he joined the campaign staff of then Vice President Richard M. Nixon.

In November 1960 he became associated with the law firm of Hogan & Hartson, and in 1964 was admitted to the firm as a general partner, specializing in corporate and banking law.

In addition to duties as Under Secretary of the Navy, Mr. Warner was given assignments representing the Department of Defense. On 15 July 1971 he was appointed Director of Ocean Affairs, with the primary responsibility of representing the Department in international affairs involving law of the sea. The President designated him head of the US Delegation which met in Moscow in October 1971 and again in Washington, DC, in May of 1972 to discuss incidents at sea between US and Soviet naval units. Secretary Warner was a member of the Presidential Party at the Moscow Summit Meeting and signed, on behalf of the United States Government, the Executive Agreement on Incidents at Sea between the United States and Soviet Union on 25 May 1972.

For his nearly four years' service as Under Secretary and then Secretary of the Navy, Mr. Warner received the Department of Defense Distinguished Public Service Medal, on 10 January 1973 from the then Secretary of Defense, Melvin R. Laird. A citation accompanying the Medal, signed by Secretary Laird, said in part:

"...John W. Warner has provided superb leadership to the Department of the Navy during a difficult period of changing priorities, missions, and resources...he has brought great energy, keen foresight, broad vision and expert managerial capacity to guiding the development of new naval forces and concepts...and to improving the management of weapons systems acquisition...he has ably represented the Department of Defense in international law of the sea negotiations, and the President of the United States in negotiating an Executive Agreement on Incidents at Sea between the United States and the Soviet Union."