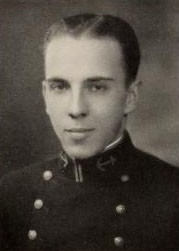 Henry Garner Clark was born in Louisville, Kentucky on July 20, 1909, son of John Arthur and Adele Ida (Jasper) Clark. He attended DuPont Manual Training High School, Louisville, Kentucky, prior to his appointment to the US Naval Academy, Annapolis, Maryland, from his native state in 1926. Graduated and commissioned Ensign on June 5, 1930, he transferred on September 11, 1936 to the Civil Engineer Corps of the US Navy. Advancing progressively in rank, he subsequently attained that of Rear Admiral to date from May 1, 1958.

Following graduation from the Naval Academy 1930, he joined the USS Tennessee, and in August 1931 was detached for communication duty in the staff of the Commander in Chief, US Fleet. In July 1932 he reported for instruction at Rensselaer Polytechnic Institute, Troy, New York, from which he received the degrees of Civil Engineer in 1934, and Master in Civil Engineering in 1935. Ordered of the Fifteenth Naval District, Balboa, Canal Zone, he remained there from July 1935 until December 1937, after which he returned to the US Naval Academy.

Between June 198 and August 1940 he was assigned to the Navy Yard, Portsmouth, New Hampshire, followed by duty as Public Works Officer at the Naval Station, Guantanamo Bay, Cuba, with additional duty as Officer in Charge of Construction, US Naval Air Facilities, Kingston, Jamaica, and Great Exuma, Bahamas, British West Indies. “For exceptionally meritorious conduct… from September 1940 to April 1942…” he received a Letter of Commendation, with authorization to wear the Commendation Ribbon, from the Secretary of the Navy. The citation continues in part:

“A diplomate of exceptional ability, Commander Clark successfully negotiated with the local Government for the necessary land for bases and arranged with Government representative to assure fully manned jobs. Working on remote islands and subject to material and equipment difficulties, he displayed sound business acumen and efficiently scheduled the job progress…”

In April 1942 he became Officer in Charge of Construction at the Naval Training Station, Pond Oreille, Idaho, with additional duty as Public Works Officer at the Naval Training Station, Farragut, Idaho. Eight months later, December 1942, he transferred to the Naval Construction Training Center, Camp Peary, Williamsburg, Virginia, where he served as Training Officer until August 1943. He was next Officer in Charge of the Second Construction Regiment, Noumea, New Caledonia, until November of that year, when he was assigned as Officer in charge of the Sixteenth Naval Construction Regiment, Bougainville (the first organized CB regiment to engage in an invasion). In May 1944 he was assigned to the Fifth Construction Brigade, as Executive Officer and Operations Officer.

He was awarded the Legion of Merit with Combat “V,” for “exceptionally meritorious conduct… as Executive Officer and Operations Officer of the Fifth Naval Construction Brigade from May 25, 1944 to June 20, 1945…” The citation further states in part:  “Arriving to Guam during the assault phase, (he) undertook  the planning of work schedules and assigning of projects to construction battalions setting up rigid controls to eliminate unnecessary work and so concentrate available manpower on the tremendous task of island development. By his excellent judgment and untiring energy during the planning phase at Pearl Harbor and the actual operations on Guam, Captain Clark contributed materially to the success of one of the greatest island development programs undertaken by the Navy’s civil engineers….”

Returning to the United States, he served in the Public Works Department at the Puget Sound (Washington) Naval Shipyard, from August 1945 until July 1946, when he transferred to the Boston (Massachusetts) Naval Shipyard for duty as Public Works Officer. He remained there until August 1948, followed by an assignment as Executive to the Assistant Chief of the Bureau of Yards and Docks for Operations, Navy Department, Washington, DC. He was Staff Public Works Officer on the staff of the Chief of Naval Air Training, Naval Air Station, Pensacola, Florida, between December 1949 and September 1952, when he became Deputy Director, Pacific Division, Bureau of Yards and Docks, with headquarters in San Francisco, California.