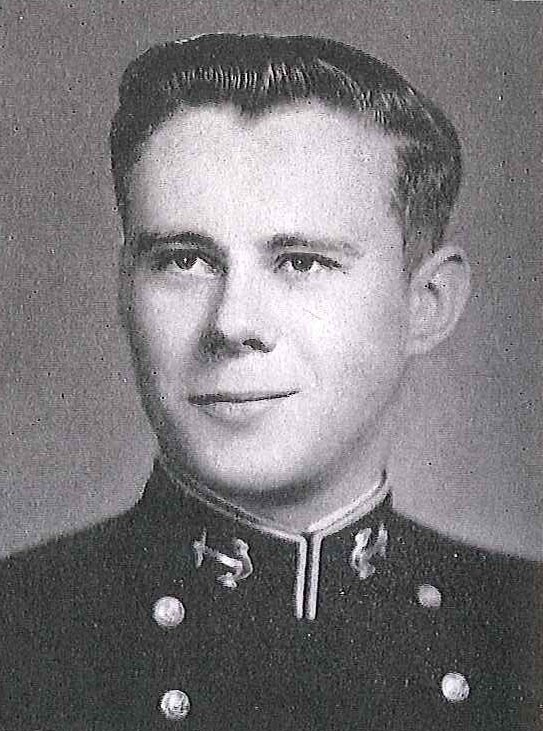 Fred Thomas Berry was born in Baltimore, Maryland, on April 28, 1922, son of Mrs. F. T. (Charlotte Laidlaw) Berry and the late Commander Berry, USN, who was killed in the crash of the dirigible USS Akron in 1933, and for whom the destroyer, USS Fred T. Berry (DDE 858) is named. He attended Coronado, California, High School and Boydens Preparatory School in San Diego, prior to entering the US Naval Academy on appointment at large (Presidential) on June 26, 1941. As a Midshipman he was a member of the US Naval Academy Swimming Team. He was graduated with the Class of 1945 (accelerated due to World War II), on June 7, 1944, and commissioned Ensign to rank from that date. By subsequent advancement he attained the rank of Captain, to date from July 1, 1965.

From June 1944 until July 1945 he served as a junior officer, with gunnery and fire control duties, on board USS Heywood L. Edwards (DD 663). While attached to that destroyer he participated in the assaults on the Philippine Islands, Battle of Surigao Strait, Leyte and Lingayen Gulf landings, and the assault and occupation of Iwo Jima and Okinawa. He is entitled to the Ribbon for, and a facsimile of the Navy Unit Commendation awarded the USS Heywood L. Edwards as follows:

“For outstanding heroism in action against enemy Japanese, forces in the Saipan-Tinian operations, May 29 to July 29, 1944; Palau, September 5 to 29, 1944; Battle for Surigao Strait, October 24-25, 1944; Iwo Jima, February 10 to 27, 1945; and Okinawa, March 21 to July 28, 1945…” The citation enumerates her part in the above sections and ends with: “Superbly handled by valiant officers and men, the Heywood  L. Edwards rendered distinctive service, sustaining and enhancing the finest traditions of the US Naval Service.”

During the period July to October 1945, he had instruction at the Destroyer Gunnery School, Pearl Harbor, TH, then joined USS Roi (CVE 103), to serve as her Gunnery Officer and Assistant Navigator until April 1946. From May through December of that year he was a student at the US Submarine School, New London, Connecticut, and in January 1947 went aboard USS Cusk (SSG-348), to serve as Guided Missile Officer, First Lieutenant, Gunnery and Electrical Officer. Detached in November 1949, he attended the US Navy Electronics Material School, Treasure Island, California, until June 1950. The following month he joined USS Greenfish (SS-351) as Operations Officer and Navigator.

He next had duty (June 1951-May 1953) as Assistant Head of the Submarine Launched Guided Missile Branch, Office of the Chief of Naval Operations, Navy Department, Washington, DC. While in that assignment, he was engaged in planning the LOON and REGULUS Guided Missiles. In June 1953 he became Executive Officer of USS Cavalla (SSK-244) and in July 1955 transferred to command Runner (SS-476), REGULUS guided submarine. Returning to the Office of the Chief of Naval Operations, in September 1957, he served in the Ballistic Missiles Branch, concerned with POLARIS planning.

In July 1959 he joined the Staff of Commander Submarine Squadron FOURTEEN, the first POLARIS submarine squadron, as Training Officer and Commander Submarine Squadron FOURTEEN Representative, New London, Connection. He was assigned in July 1961 to POLARIS Planning, Special Projects Office, Navy Department, Washington, DC, and from July 1963 to July 1964 was a student at the National War College, Washington, DC.