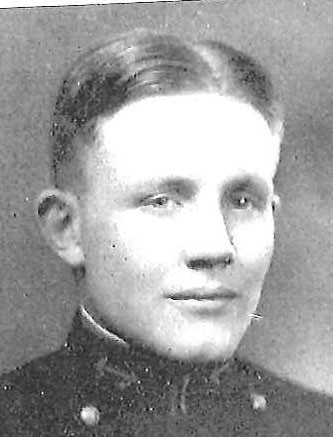 Wreford Goss Chapple was born in Billings, Montana, on March 19, 1908, son Mr. and Mrs. Louis Chapple. He attended Billings High School before entering the US Academy, Annapolis, Maryland, from his native state in June 28, 1925. As a Midshipman he played football, was heavyweight boxing champion and was elected President of his graduation class. Graduated and commissioned Ensign on June 5, 1930 he subsequently advanced in rank attaining that of Captain, to date from July 1, 1949, having served in that rank (temporary) from December 10, 1945 until December 1, 1947.

After graduation from the Naval Academy in 1930, he joined USS Montana and in May 1932 was detached for submarine training at the Submarine Base, New London, Connecticut. Qualified in submarines, he was ordered to Asiatic Station, where he served in USS S-38 from February 1933 until June 1935, after which he had duty ashore in the Department of Physical Training at the Naval Academy.

He reported in January 1936 on board USS Pike and in June of that next year returned to Annapolis, Maryland for the course in naval engineering at the Postgraduate School. Following successive duty, June 1939- November 1940 in the submarines Perch and Tarpon, he again joined USS S-38, on Asiatic Station, this time as her Commanding Officer and was attached to her when the United States entered World War II. For heroism in command of the S-38 “in action against enemy Japanese forces in the Philippines Islands Area from December 12 to 22, 1941…” he was awarded the Navy Cross. The citation continues in part:

“Although menaced by treacherous currents while patrolling in shallow waters, (he) daringly maneuvered his vessel into advantages striking positions for attacks on enemy transports and supply ships engaged in landing operations. He directed the activities and fire of his with such expert tactical skill and sound judgement as to destroy two loaded enemy vessels without sustaining serious damage to his own ship… contributed in large measure to the success of these vital missions…”

He assumed command of USS Permit at Surabaya, Java in February 1942. As such he participated in her fourth war patrol in Southern Philippine waters, including a trip a Corregidor in February 1942, to land several thousand rounds of ammunition; her fifth war patrol in the Macassar Strait and Celebes Sea; her sixth war patrol off Ambon and Davao and in the Marianas and Carolines; her seventh war patrol off the northern coast of Honshu and the southern coast of Hokkaido; her eighth war patrol in the Marianas and her ninth patrol in the Sea Japan. For outstanding services as Commanding Officer of the USS Permit he was awarded a Gold Star in lieu of the Second Navy Cross, the Silver Star Medal and a Gold Star in lieu of a Second Silver Star Medal. The citation follow in part:

Gold Star in Lieu of a Second Navy Cross: “For extraordinary heroism as Commanding Officer of a submarine on patrol in enemy Japanese-controlled waters. With outstanding courage and skill, (he) succeeded in closing an enemy convoy, sinking two ships and, in two other attacks, inflicting severe damage on two hostile freighters, thereby furthering the war of attrition. His aggressive leadership and indomitable fighting spirit and the gallant devotion to duty of his command were in keeping with the highest traditions of the United States Naval Service.”

Silver Star Medal:  “…. During action against enemy Japanese forces in the Pacific Area. Despite the strain of prolonged undersea operations in perilous hostile waters, (he) pressed home his relentless attacks with cool courage and outstanding ability, sinking an important amount of Japanese shipping. Employed skillful evasive tactics against the determined anti-submarine measures of ships and aircraft, he successfully completed the dangerous assignment by bringing his vessel to safety without having sustained disabling damage. His daring aggressiveness and unswerving devotion to duty at great personal risk were in keeping with the highest traditions of the United States Naval Service.”

Gold Star in lieu of Second Silver Star Medal:  “… Skillfully maneuvering his ships into striking position, (he) attacked the enemy with outstanding courage and determined and succeeded in sinking or damage an important amount of Japanese shipping. His superb leadership and aggressive fighting spirit reflect great credit upon himself, his command, and the United States Naval Services.”

Returning to the United States in the summer of 1943, he had duty in connection with fitting out USS Bream at the Submarine Base, New London, Connecticut and commanded that submarine from her commission, January 24, 1944 until December of that year. For outstanding service as Commanding Officer of the USS Bream he was awarded the Bronze Star Medal with Combat “V” and a Gold Star in lieu of the Third Silver Star Medal and cited in part as follows:

Bronze Star Medal: “For heroic achievement as Commanding Officer of the USS Bream during her First War Patrol against enemy Japanese forces in the vicinity of Halmahera and Morotai from June 1 to 29, 1944. Pressing home vigorous attacks on all occasions despite unusually severe countermeasure, (he) succeeded in inflicting damage on three enemy freighters in two hazardous attacks. Although the Bream received three, dangerously close aircraft bombs just before firing on a medium freighters, and each attack was accompanied by particularly severe depth charge attacks by enemy escort, (he) undaunted by the fierce Japanese assault, fired his torpedoes and completed his mission. In addition to carrying out a difficult special mission, he skillfully directed the Bream in other bold attacks which resulted in the damaging of a total of 12,000 tons of Japanese shipping…”

Gold Star in lieu of the Second Silver Star Medal: “For distinguished himself by gallantry and intrepidity as Commanding Officer of the USS Bream during the Third War Patrol of that vessel off the west coast of Luzon from October 21 to November 22, 1944. Despite rigorous enemy air and surface antisubmarine measures, Commander Chapple pressed attacks upon two enemy cruisers, damaging them severely. In addition skillfully attacks were made which resulted in the Bream’s receiving one-half credit in sinking a large AP and damaging another. Commander Chapple also displayed exceptional ability as Officer in Tactical Command of a successful coordinated search and attack group consisting of the USS Bream, USS Baton, and USS Guitarro. In three well-planned attacks these submarines sank three large enemy cargo ships, a large transport and a heavy cruiser…”

Between February and December 1945 he was an Instructor at the Submarine School, New London, Connecticut and in January 1946 became Commander Submarine Division One Hundred Two. Three months later he transferred to command of Submarine Division Eighty-Two and in June 1947 joined the staff of Commander Second Task Fleet as Anti-Submarine Warfare Officer. He was Executive Officer of the Naval Training Station, Newport, Rhode Island from July 1948 until July 1950, after which he commanded USS Manatee, operating in the Korean area of hostilities. In December 1951 he reported as Commanding Officer of the attack transport Renville and in July 1952 was detached for duty as Director of the Special Services Division, Bureau of Naval Personnel, Navy Department, Washington, DC.