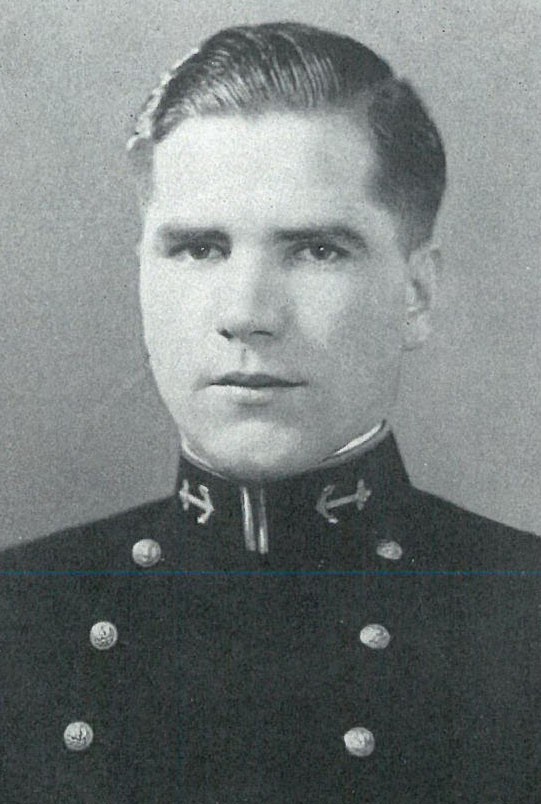 John Andrews, Jr., was born in Lidgerwood, North Dakota, on 21 November 1905, son of John and Mary Fritz Andrews. He attended Fargo, North Dakota, High School, and entered the US Naval Academy, Annapolis, Maryland, on 1 September 1925, on appointment of Senator Edwin Ladd of North Dakota. Graduated with the degree of Bachelor of Science and commissioned Ensign, USN, on 6 June 1929, he subsequently advanced in rank to that of Captain, to date from 30 March 1945.

After graduation in June 1929 he was assigned to USS New Mexico, and served as a Junior 0fficer in that battleship until May 1930, after which he was a student (pre-flight) at the Naval Air Station, Pensacola, Florida, for two months. In July  1930 he joined USS Hulbert, operating with Destroyer Division 11, Battle Force, as a Division Officer, and had duty in the same capacity on board USS Sacramento, a cruiser of the Special Service Squadron, from December 1931 until November 1934.

He served as a Division Officer in USS Nevada, a unit of Battleship Division 2, during the period following, until June 1936, then returned to the Naval Academy for a tour of duty as Instructor in the Department of Physics. Detached in June 1939, he served for two years as Executive Officer of USS Boggs, a minesweeper, and in May 1941 was transferred to similar duty on board USS Mugford, a destroyer based at Pearl Harbor at the time of the Japanese attack on the Fleet there on 7 December 1941. As Executive Officer of the Mugford during the early period of World War II, he participated in Operations of Task Force 14, attempting to reinforce Wake Island and subsequently in convoy operations between Pearl Harbor, T H, and Australia.

In May 1942 he assumed command of USS Montgomery, minelayer which under his command, participated in the capture and defense of Guadalcanal from 31 January to 1 February 1943. In April 1943 he reported to the Navy Department, Washington, DC, for duty in the Bureau of Ships, and in December 1944 he was detached for instruction at the Army-Navy Staff College. On graduation in June 1945, he reported to the staff of Commander SEVENTH Fleet, in the Pacific, and served the remaining months of the war period in the Plans Division.

For service during the war he was awarded a Letter of Commendation with Ribbon from the Commander in Chief, US Pacific Fleet, as follows: "For meritorious conduct in the performance of his duties as Commanding 0fficer of the USS Montgomery, engaged in laying mine fields in waters controlling the passage surrounding Adak, Aleutian Islands, during October and November 1942. Despite adverse weather conditions and the hazardous nature of these operations, he handled his ship expertly in laying of mines in the narrow and poorly charted waters. His outstanding performance of duty in the presence of enemy submarines and in the proximity of the enemy garrison at Kiska, he contributed materially to the successful completion of the mining campaign..."

Remaining in the Far East, he served from October 1945 until March 1947 as Commanding Officer of the Navy Port Facility at Shanghai, China, and for four months thereafter served as Division Commander, Destroyer Division 212. From August 1947 to October 1948 he commanded USS Titania (AKA-13), after which, until August 1950 he served as Material Officer on the Staff of the Commander San Francisco Group, Pacific Reserve Fleet. He next commanded USS Telfair (APA-210) for a year, and in August 1951 reported to Headquarters, Eighth Naval District, New Orleans, Louisiana, as Reserve Coordinator and Assistant Chief of Staff for Personnel.

Under orders of 28 September 1953, he was detached to be Captain of the Port, Cristobal, Canal Zone, and on 11 May 1956, he was ordered to return to Headquarters, Eighth Naval District, for further duty.