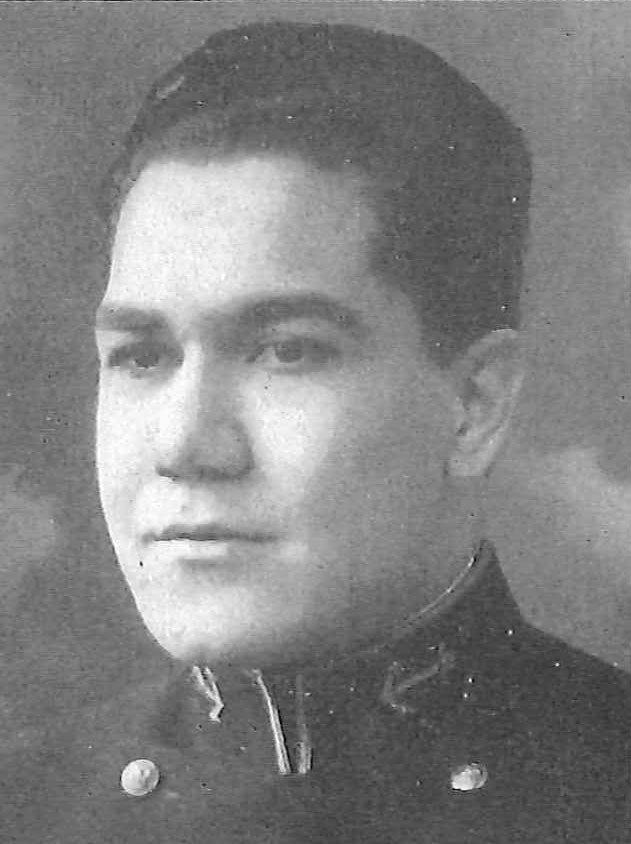 Charles Frederick Chillingworth, Jr., was born in Honolulu, T.H., on March 6, 1903, son of Charles F. and Anna V. (Stratemeyer) Chillingworth. He attended Blackman’s School and Panahou Academy in his native city before entering the US Naval Academy Annapolis, Maryland, in July 1921. For “excellence in athletics” he won the Navy Athletic Association Sword, having participated in football, waters polo, and crew. Graduated and commissioned Ensign on June 4, 1925, he subsequently attained the rank of Captain, to date from July 20, 1943. His selection to the rank of Rear Admiral was approved by the President on July 19, 1952, his date of rank June 1, 1953. On August 1, 1956 he was transferred to the Retired List of the US Navy, and was advanced to the rank of Vice Admiral on the basis of combat awards.

Upon graduation from the Naval Academy, he was assigned to the battleship New Mexico, in which he had engineering and gunnery duties from June 1925 to January 1927. During the remainder of that year and the next, he served as Engineer Officer of  USS Burns, a unit of Division 2, Mine Squadron, Fleet Base Force, located at Pearl Harbor, T.H., until the Burns was ordered to the East Coast in October 1928.

In January 1929 he reported to the Submarine Base, New London, Connecticut, for instruction in submarines. He was ordered in June 1929 to USS S-24, based at San Diego, California, later a unit of Submarine Division 8, Submarine Force, at Pearl Harbor. During his three year period aboard that submarine, he served finally as Executive Officer. From June to September 1932, he was attached to USS Chaumont, and thereafter for three years had duty in Naval Communications, Office of the Chief of Naval Operations, Navy Department, Washington, DC.

Ordered in June 1935 to USS Colorado, he served for three years in the Gunnery department of that battleship. From July 1938 to May 1940, he was assigned to the Naval Torpedo Station, Newport, Rhode Island, and when detached was ordered to the Pacific where, from July 1940 until October 1944, he had five successive commands including USS Preble to December 1941; USS Dewey to October 1942; USS Renshaw to July 1943; Commander Destroyer Division 100 to May 1944, and Commander Destroyer squadron 50, October 1944. During that time he participated in engagements at Pearl Harbor; Midway, air strikes on Bougainville; Salamau Lae, and the Coral Sea ad New Georgia operations, among others.

He was awarded the Legion of Merit with Combat “V,” and the Bronze Star Medal with two Gold Stars, each with Combat “V,” The citations follow in part, in order of the actions for which awarded.

Gold Star in lieu of Second Bronze Star Medal: “For meritorious achievement while serving as Commanding Officer of the USS Dewey, in action against enemy Japanese forces in the vicinity of Bougainville, February 20, 1942; Salamau and Lae, March 10, 1942; and the battle of the Coral Sea, from May 4 to 8, 1942. Directing accurate gunfire from his ship, (he) assisted in destroying sixteen of eighteen Japanese bombers attacking one of our carriers and later guided his ship deep into an area controlled by Japanese aircraft to attack a Japanese convoy landing at Salamau and Lae. Screening a carrier at the Battle of the Coral Sea, he assisted in repelling Japanese planes attempting to land on our carrier and the following day shot down three Japanese planes attacking a carrier. (He)… rescued one hundred and thirty survivors of a carrier lost in this action and contributed materially to the success of our forces…”

Gold Star in lieu of the Third Bronze Star Medal:  “….as Commanding Officer of the USS Renshaw attached to the Task Group during operations … at Kolombangara, Shortland, and Bougainville, Solomon Islands, the night of June 29, 1943. Operating under cover of darkness in poorly charted waters during the mine laying mission in strategically important area, (he0 directed these operations skillfully despite adverse weather conditions and, by his expert professional ability, contributed materially to the overall success of this hazardous action in lanes used extensively for enemy shipping…”

Legion of Merit: “For exceptionally meritorious conduct in the performance of outstanding services… as Commander of a Destroyer Division during action against Japanese enemy forces on Truk, February 16 and 17, 1944; and during carrier raids on the Saipan Tinian Area on February 21 and 22, 1944. With the units of his division subjected to continuous day and night torpedo and bombing attacks, (he) directed this ships under his command in assisting in the destruction of twelve hostile planes and, maintaining a protective position for the carriers enabled the task group to proceed to the initial launching point and to carry out a damaging air attack against enemy shipping, airfields and shore installations on these strategically important islands…”

Bronze Star Medal:  “For meritorious service as Commander, Destroyer Division One Hundred and later as Commander, Destroyer Squadron Fifty, in connection with operations against enemy Japanese forces in the Western Pacific War Area, from January 16 to June 30 1944. Ably administering to the offensive and defensive measures against the enemy and to the success of these operations…”

When detached from duty in the Pacific in September 1944, he reported to the Naval Base, Norfolk, Virginia, for duty as Precommissioning and Training Officer there, attached to the Atlantic Fleet. For his services in that assignment, which extended to May 1945, he was awarded the Letter of Commendation with Ribbon by the Commander in Chief, US Atlantic Fleet. From May 1946 to March 1947 he served as Chief og Staff to the Commandant, Naval Base, Norfolk, followed by duty as Operations and Plans Officer, on the staff of Commander Second Fleet.

The year August 1949-1950, he attained the National War College, Washington, DC, and upon completion of the course in July 1950, he had orders transferring him to duty in the Officer of the Chief of Naval Operations, Strategic Plans Division, Navy Department, as Head of the Plans Development Section. Returning to sea duty in January 1952, he assumed command of the cruiser Rochester. “For exceptionally meritorious conduct… as Commanding Officer of the USS Rochester, and as Task Element Commander during operations against enemy aggressor forces in Korean from January 28 to April 19, 1952…” he was awarded a Gold Star in lieu of the Second Legion of Merit with Combat “V” The citation further states in part:

“A capable and inspiring leader, Captain Chillingworth discharged his many responsibilities with exceptional skill and foresight and directed the groups under his command on repeated gun strikes against hostile forces and installations in coastal areas of North Korea. Exercising superb seamanship, he adroitly maneuvered his several Task Elements through mined and restricted waters and, employing the firing power of the vessels against the enemy with maximum effectiveness, succeeded in inflicting heavy damage upon hostile fortified positions and in seriously delaying the enemy’s shipment of needed supplies to the front line area…”

Detached from command of the Rochester in September 1952, he was ordered to the Office of the Chief of Naval Operations, Navy Department, where he remained for a month prior to reporting December 21, 1952, as Commander Military Sea Transportation Service, Eastern Atlantic and Mediterranean Area, with headquarters in London, England. On May 12, 1955 became Director of the Joint Subsidiary Plans Division, Joint Staff Office, John Chiefs of Staff, Washington, DC, continuing to serve in that capacity until relieved of all active duty pending his retirement, effective August 1, 1956.