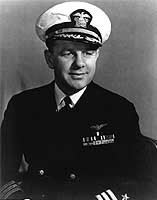 Clarence Wade McClusky, Jr. was born in Buffalo, New York, on 1 June 1902, son of C. W. McClusky and Marie (Stearns) McClusky both now deceased. He attended public schools in Buffalo and entered the US Naval Academy, Annapolis, Maryland, from his native state on July 18, 1922. Graduated and commissioned Ensign on 3 June 1926, he subsequently advanced to the rank of Captain, his date of rank 1 August 1943.

Following graduation in June 1926, he remained at the Naval Academy for the summer course in aviation and later that year joined the USS Pennsylvania, flagship of Battleship Division 3, Battle Fleet, in which he served until May 1927. For six months thereafter he had duty in the USS Williamson, a unit of Destroyer Division 42, Scouting Fleet, and upon detachment had instruction from January to June 1928 at the Naval Torpedo Station, Newport, Rhode Island. Ordered to the Naval Air Station, Pensacola, Florida, he completed flight training and was designated Naval Aviator on 7 May 1929.

From July 1929 to May 1931 he served with Fighting Squadron ONE-B, the "High Hat Squadron," of Aircraft Squadrons, Battle Fleet (later of Carrier Division TWO, US Fleet), based on the USS Saratoga. For two months he was attached to the Naval Air Station, Pearl Harbor, and from July 1931 to June 1932 served as Aide on the staff of Commander Minecraft, Battle Force. He remained in the Pacific area until May 1933 with two months' duty with aircraft Squadrons of the Fleet Air Base, Pearl Harbor, Territory of Hawaii, and from August 1932 assigned to Patrol Squadron 4-B (later re-designated 4-F).

He returned to the Naval Academy for instruction at the Post-graduate School, and completing the General Line course in May 1934 joined Observation Squadron 4-B attached to the USS Maryland. A year later he became Aide and Flag Lieutenant on the staff of Commander Aircraft, Base Force, transferring in June 1936 in the same capacity to the staff of Commander, Aircraft, Battle Force. Returning again to Annapolis, he had duty as an instructor in the Department of Seamanship and Navigation from March 1938 to May 1940 after which he joined Fighting Squadron 6, based on the USS Enterprise. In April l941 he assumed command of that squadron and from April to June 1942 served as Commander Air Group SIX, of the Enterprise.

For outstanding service while attached to the USS Enterprise, participating in raids on Marshal, Gilbert, Wake, and Marcus Islands, and the Battle of Midway, he was awarded the Air Medal, the Distinguished Flying Cross, a Letter of Commendation with Ribbon by Commander in Chief, Pacific Fleet, and the Navy Cross. He is also entitled to the Ribbon for, and a facsimile of the Presidential Unit Citation to the USS Enterprise for "distinguished achievement during repeated action against enemy Japanese forces in the Pacific War Area, December 7, 1941 to November 15, 1942..." and the Purple Heart Medal for wounds received at Midway. The citations follow in part:

Air Medal: "For meritorious achievement in aerial flight...during operations against enemy Japanese forces in the vicinity of Wake, Marcus and the Hawaiian and Marshall Islands from December 7, 1941 to March 4, 1942, completing his fifth mission during this period..."

Distinguished Flying Cross: "For heroic conduct in aerial flight as Commander of a Fighting Squadron in the initial attack on Wotje Atoll, Marshall Islands, on February 1, l942...he repeatedly bombed and strafed objectives causing severe damage to the enemy. Later, while leading a combat patrol over the task force, contact was made with two twin-engined bombers... He led his command in repeated aggressive attacks...resulting in the destruction of one and serious damage to the other ..."

Letter of Commendation: "For distinguished service in the line of his profession as Commander of a Fighting Squadron in the attack against Wake Island on February 24, l942. In spite of unfavorable weather conditions, the attack was pushed home in a resolute manner and all enemy objectives were successfully attacked..."

Navy Cross: "For extraordinary heroism and conspicuous devotion to duty as Commander ( Enterprise) Air Group, in the Battle of Midway on June 4, 1942..." The citation further states that he "led his Air Squadron in a thorough and dogged search flight, maintained until the objective was sighted, and followed by a bold, determined attack against four enemy Japanese carriers in complete disregard of heavy enemy anti-aircraft fire and fierce fighter opposition, with the result that such severe damage was inflicted on enemy carrier flight decks as to effectively put then out of action."

Detached from the Enterprise, he had administrative duties with Carriers, Pacific Fleet for a month, and in September 1942 reported to the staff of Commander Fleet Air, Alameda, California. From June 1943 to August l944 he served as Aide to the Vice Chief of Naval Operations, Navy Department, Washington, DC, and throughout the remainder of the war period he commanded the USS Corregidor (CVE-58). During the months of August 1945 until February 1946 he had successive duty as Chief of Staff and Aide to Commander Carrier Division FOUR and Commander Carrier Division FIVE.

After his return to the United States, he reported in April 1946 to the US Naval School of General Line, Newport, Rhode Island, where he served until September 1947 as Executive Officer. The next year he had similar duty at the US Naval School of General Line at Monterey, California, and in August 1948 reported as Chief of Staff and Aide to Commander Carrier Division FOUR. In 1949 he was a student at the National War College, Washington, DC, being detached in May 1950 to the Office of the Chief of Naval Operations, Navy Department, where he was Director, Long Range Plans Division, until May 1951.

From June 1951 until August 1952 he had consecutive duty as Chief of Staff to Commander FIRST Fleet, and Chief of Staff to Commander SEVENTH Fleet, serving in the latter capacity in the Korean Area. He was awarded the Legion of Merit "For meritorious conduct in the performance of outstanding services to the Government of the United States as Chief of Staff and Aide to Commander SEVENTH Fleet, during operations against aggressor forces in Korea from 3 March to 25 July 1952..." The citation states that "Through-out this period Captain McClusky displayed keen foresight and exceptional skill in organizing the staff, and ably coordinated and supervised the numerous planning, operational and administrative details incident to the many and varied activities of the SEVENTH Fleet..."

In August 1952 he assumed command of the Naval Air Station, Glenview, Illinois, and after his detachment in February 1953, returned to the Navy Department, Washington, DC, for duty as Assistant Director, Production Division, Office of Naval Material. In June 1954 he became Commander of the Boston Group, Atlantic Reserve Fleet. He continued to serve as such until transferred to the Retired List, effective 1 July 1956, and was advanced to Rear Admiral on the basis of combat awards. Rear Admiral Mclusky died on 27 June 1976.

Following retirement, Rear Admiral McClusky, with his wife, the former Ruth Mundy of Orange, Virginia, and his son Philip Mason McClusky, resided in Towson, Maryland. He had another son, Wade Sanford McClusky, by a former marriage.