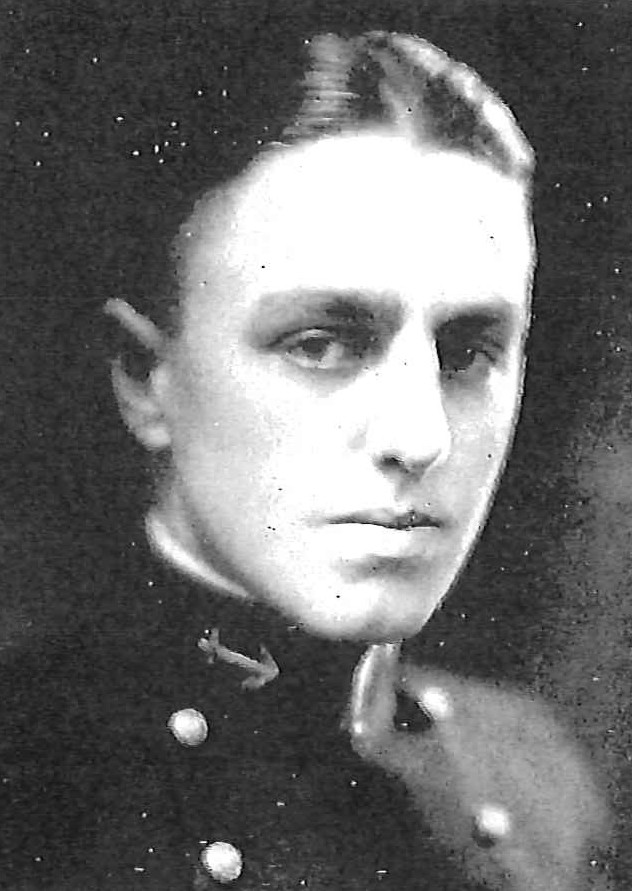 James Powell Clay, born in Hutchinson, Minnesota, on July 19, 1900, attended Carleton College, Northfield, Minnesota, before his appointment to the US Naval Academy, Annapolis, Maryland, from the Third District of Minnesota in 1918. As a Midshipman he was a member of the Rifle Team. He was graduated as follows: Lieutenant (junior grade), June 3, 1925; Lieutenant, July 10, 1928; Lieutenant Commander, September 1, 1937; Commander, January 1, 1942; and Captain, May 10, 1943, to rank of from June 21, 1942. On July 1, 1952 he was transferred to the Retired List of the US Navy ad was advanced to the rank of Rear Admiral on the basis of combat awards.

From August 1937 until November 1939, he served on China Station, commanding the USS Mindanao and USS Wipple. In 1938 he was present at Canton, China, during about four hundred air raids, evacuation and Japanese occupation.

Upon his return to the United States, he had duty at the Naval Training Station, Newport, Rhode Island, from December 1939 until March 1941. The following five months, as Assistant Naval Attaché at the American Embassy, London, England, he acted as US Naval Observer in the Western Mediterranean with the Royal Navy, most of this period spent in the HMS Renown.

Upon the outbreak of World War II, he was assigned to the Office of the Commander in Chief, United States Fleet, Readiness Division, where he was in charge of anti-submarine training of ships of destroyer, destroyer escort and submarine chaser classes. In August 1943, he was ordered to command Destroyer Squadron Seven in the Mediterranean and assigned duty as Commander Destroyer, Eighth Fleet, which continued until May 1945. He as awarded the Legion of Merit and a Gold Star in lieu of the Second Legion of Merit, each with Combat “V,” and cited as follows:

Legion of Merit:  “For exceptionally meritorious conduct in the performance of outstanding services to the Government of the United States as Commander of an Escort Group with Flag in the USS Plunkett, during the advanced landings in the Anzio-Nettuno Area, Italy, in January 1944. A daring and aggressive leader, Captain Clay skillfully deployed the units under his command to provide effective protection against hostile submarine, E-boats and aircraft for the assault convoy during its assembly, sortie and seaward movement in the assault area. Subsequent to the landings, he disposed the ships of his Group to screen the transport anchorages and gunfire support areas and to escort convoys returning to reloading ports. His judgment, brilliant combat tactics and his efficient control of operations while under concentrated aerial torpedo and glide-bombing attacks in which 53 officers and men of the Flagship were killed, contributing materially to the success of the landings and the sustained maintenance of the Anzio beachhead. Captain Clay’s courageous and inspiring conduct under fire reflects the highest credit upon himself and the United States Naval Service.”

Gold Star in lieu of the Second Legion of Merit:  “For exceptionally meritorious conduct in the performance of outstanding services to the Government of the United States as Commander of the Anti-Submarine and Convoy Control Group of the Western Naval Task Force, during the amphibious invasion of Southern France in August 1944. When the assault convoys moved from mounting and staging areas to assault anchorages, (he) skillfully disposed his units to screen them from enemy submarine, E-boat and guided missile attack. During the unloading period, he established an effective outer beachhead screen which protected vital shipping supporting the advance of the Allied Armies against enemy penetration from seaward. Efficiently organized and scheduling the sailing of return convoys, he expedited the movement of vital equipment and material in special use craft and shuttles. By his excellent supervision of the progress of maintenance operations and his control of incoming convoys to newly opened beaches, he contributed materially to the rapid build-up achieved by the Allied Armies and to the ability of service units to support the phenomenal advance of our troops”

During the above assaults, his command included English, French and Greek destroyers.

He served as Chief of Staff to Commander Destroyer, Atlantic until December 1946; commanded the USS Huntington until November 1947; and until May 1950 was Assistant Naval Attaché for Research, London, England. His last assignment, prior to his retirement on July 1, 1952, was Inspector General of the Eastern Sea Frontier, with headquarters in New York, New York.

Science retirement, he has developed and operated an investment firm, specializing in Mutual Funds, in Arlington, Virginia.