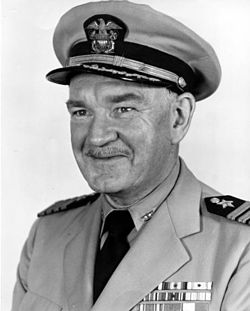 Walter Karig was born in New York, New York on 13 November 1898, son of Martin and Elsie (Ellis) Karig. He received his early education in schools of New York City, and studied art at the New York School of Fine Arts and Ecole Julien in Paris, France.

During World War I he served in the French Foreign Legion and Free Polish Legion, completing his service in the latter as Captain of Infantry. He was appointed Lieutenant Commander in the US Naval Reserve in September 1942, and subsequently attained the tank of Captain on 15 January 1946. Transferred to the Retired List of the US Naval Reserve, effective 1 June 1948, he was immediately recalled to active duty.

His WWII service began with a civilian assignment in August and September 1941 as a Special Representative of Secretary of the Navy Frank Knox, aboard the USS Wichita, during the Iceland Occupation. Accepting appointment in the Naval Reserve in October 1942, he reported to the Office of Public Relations (later re-named the Office of Public Information), Navy Department, Washington, DC. There he organized the Magazine and Book Section, and served as its Chief throughout the war period, except for brief periods of detached duty in 1943, aboard the USS Texas, on convoy duty in the Mediterranean, and in 1944, at Naval bases on the West Coast, and with the Commander in Chief, Pacific Fleet.

In October 1943 he assumed additional duty as Officer in Charge of the Navy Narrative History Project, and two years later became Assistant Director of Public Relations. He received a Letter of Commendation, with ribbon, from the Secretary of the Navy, as follows: "For outstanding performance as a Public Information Officer from September 1, 1942 to October 10, 1945. Volunteering his services in publicizing naval activities during the early critical period of the war, Commander Karig organized and became Head of the Magazine and Book Section of Public Information. A brilliant writer and editor, he applied his fine talents and broad knowledge of the techniques of publishing to the production of hundreds of books and more than one thousand major magazine articles concerning the Navy at war...(As) Assistant Director of Public Information, he extended to all media the same understanding and cooperation and by his capable authorship of Battle Report, Volumes I and II, provided the public with an accurate, inspiring narrative of the Navy at war, and contributed in large measure to the morale of the men in the Fleet..."

From January 1946 to April 1947 he served as a member of the Secretary's Committee on Reorganization, with collateral duty as Press Aide to Fleet Admiral C.W. Nimitz, then Chief of Naval Operations. For two months thereafter he served on the staff of the Commander in Chief, Pacific Fleet, with duty concerning the organization of Trust Territories. Upon his return to the Navy Department, he continued duty with the Secretary's Committee on Reorganization until March 1948, the date of his physical retirement, an indirect result of injuries sustained in the Pacific.

Remaining on active duty, he served until June 1950 as Special Assistant to the successive Chiefs of Naval Operations, Admirals Denfeld and Sherman, and for four months had staff duty with Commander in Chief, Naval Forces, Far East, responsible for the organization of press and public information offices in Korea. In October 1950 he was designated Special Deputy to the Chief of Information, and from June 1952 has had correlated duty as Special Assistant to the Secretary of the Navy for Public Relations. On 15 April 1954 he was relieved of all active duty.

"For exceptionally meritorious conduct...as a public information officer from 11 October 1945 to 13 January 1953..." he was awarded the Legion of Merit. The citation follows in part: "...(He) provided continuity and a hard core of common sense to the entire field of Naval Public Relations throughout this period...(and) traveling to the areas involved, he was personally responsible for the preparation and collaborated in the writing of a popular narrative history entitled Battle Report, which provided the public with an accurate, scintillating account of the Navy at war..."

Continuing, the citation further states: "Sent to the Pacific Area in 1947, he gathered pertinent information to incorporate in his book Fortunate Islands, a complete report on the Navy's administration of trust territories. Later, in 1950, he journeyed to Korea to organize public relations and to collect material for Volume VI of Battle Report, published in 1951. Exercising his exceptional ability as a writer and historian, he rendered invaluable assistance in the organization and implementation of a television series, Victory at Sea, and later became technical director and Naval Officer in Charge of the series which portrays in authentic motion pictures the Navy's role in WWII, based on Battle Report and other source material."

In addition to Battle Report which he initiated, edited and collaborated in writing, and The Fortunate Islands, both official assignments, Captain Karig collaborated with Rear Admiral Harley Cope in the writing of a submarine history, Battle Submerged, in 1951.

Mrs. Karig was the former Eleanor Keating Frere of Terre Haute, Indiana. They had two daughters.

As a civilian, after World War I, Captain Karig was a news and editorial writer, columnist, and cartoonist. As such he travelled extensively in the United States, Canada, and Mexico; spent six weeks in Japan in 1935, and subsequently toured the Philippine Islands, Malay Peninsula, Ceylon, India, Egypt, Italy, and France. Prior to 1935, when he began writing news commentary exclusively, he published twenty books of children's adventure fiction, under various pseudonyms and a mystery novel, republished in England as a Crime Club "book of the month."

In 1939 he was made Washington correspondent for Cecil Brooks News Service, London, England, widely represented in British magazines and Allied Newspapers, Ltd., and in 1941 wrote similarly for the London Evening Star. He was Washington Editor of the Manchester (England) Guardian; Chief of Bureau, Newark (New Jersey) Evening News and MacFadden Publications (Liberty, etc.). As a free lance writer, he contributed to Colliers, Saturday Evening Post, and other magazines. He is author of four popular novels, Lower than Angels, 1944; Zotz! (book of the month, October), 1947; Caroline Hicks, 1950; and Neely, 1952; and, with his wife, wrote Pig in the Parlor, 1949."

Captain Karig was the Washington delegate to the first Pan-American Press Congress at Mexico City, Mexico, in 1942, and was elected First Vice President of the Permanent Committee of the Congress.

He was a member of the New York Yacht Club; and in Washington, the Cosmos Club, Gridiron, Carabao, National Press, and Circus Saints and Sinners.