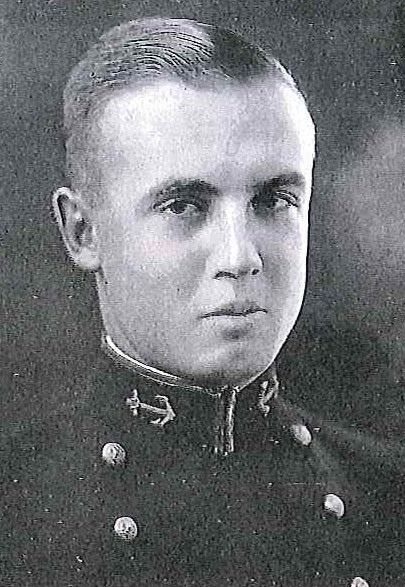 Ralph Earle, Jr., was born on December 22, 1900, in Annapolis, Maryland, son of Mrs. Janet (Schenck) Earle and the late Rear Admiral Ralph Earle, USN. He attended Annapolis High School and Schadman's Preparatory School, Washington, DC, before his appointment, at large, to the US Naval Academy, Annapolis, in 1918. As a Midshipman he participated in class lacrosse and swimming. Graduated and commissioned Ensign on June 3, 1922, he subsequently attained the rank of Captain to date from April 1, 1943. His nomination to the rank of Rear Admiral was confirmed by the U. S. Senate on July 27, 1951, his date of rank June 1, 1951.

Following graduation from the Naval Academy in 1922, he had a months [sic] duty in USS Argonne prior to joining USS New York,in [sic] September. In June 1925 he transferred to USS Charles Ausburne and when detached from the latter in May 1928, he proceeded to Asiatic Station, for successive sea service in USS Helena and USS Truxtun. Returning to the United States in May 1931, he had instruction in General Line and Applied Communications at the Post-graduate School, Annapolis, Maryland.

Completing instruction there in May 1933, he assisted in the fitting out of USS New Orleans, and reported on board upon her commissioning on February 15, 1934. In June 1936 he was assigned as Radio Officer on the staff of Commander Cruiser Division SEVEN, and in September of that year transferred in a similar capacity to the staff of Commander Squadron FORTY-T, operating in European waters during part of the Spanish Civil War. Between July 1937 and May 1939 he was Assistant District Communication Officer in the Thirteenth Naval District, Seattle, Washington, and during this period commanded USS Evans for one month before that vessel was transferred to the British Navy at Halifax, Nova Scotia.

He was aboard USS Trenton until January 1941, when he assumed command of USS Ralph Talbot. That destroyer was moored at Pearl Harbor, TH., when the Japanese attacked the Naval Base there on December 7, 1941, and subsequently participated in the first raids on the Marshalls, Wake and Marcus Islands. "For distinguished service…and especially for his courage and effective handling of his ship during the action against strong enemy island positions on February 1, 1942…" he received a Letter of Commendation, with authorization to wear the Commendation Ribbon with Combat "V," from the Commander in Chief, US Pacific Fleet.

Detached from command of the Ralph Talbot in July 1942, he had six months' duty in the Office of the Chief of Naval Operations, Navy Department, Washington, DC, before assuming command in June 1943, of Destroyer Squadron FORTY FIVE, with additional duty as Commander Destroyer Division EIGHTY NINE. For meritorious service in the latter assignment, he received a second Letter of Commendation with authorization to wear the Bronze Star and Combat "V," and the Legion of Merit also with "V." The citations follow in part:

Letter of Commendation: "For meritorious and efficient performance of duty as Commander of a Destroyer Squadron escorting transport and cargo vessels carrying reinforcements to the American-held positions in the Empress Augusta Bay area, Bougainville Island, on November 8, 1943. When the force of which  his squadron was a part was subjected to a coordinated attack by approximately one hundred Japanese torpedo and fighter planes, Captain Earle, by skillfully stationing and maneuvering the escorting vessels of his squadron under extremely difficult navigational conditions assisted in repelling the attack and in destroying several enemy aircraft…"

Legion of Merit: "For exceptionally meritorious conduct…during action against enemy Japanese forces in the New Ireland-Bougainville areas, from October 20, 1943 to April 5, 1944. When our forced launched the initial operations against the fanatically entrenched foe, Captain Earle ably conducted damaging bombardments against heavily fortified enemy shore installations and later commanded his Squadron on numerous successful escort missions, protecting the transporting of re-inforcements [sic] and supplied to our troops in the forward areas…He further displayed great courage and superb leadership in leading a highly successful reconnaissance raid on enemy-held Green Island, securing valuable information which aided in the occupation of the island by our forces…"

In June 1944 he joined the staff of Commander Destroyers, US Pacific Fleet, as Operations and Training Officer, and in April 1945 became the Representative of Commander Destroyers, Pacific Fleet, in the Philippine Islands, attached to USS Dixie. He was awarded the Bronze Star Medal and cited in part as follows: "…During this critical period in the war against Japan, Captain Earle maintained the ships under his cognizance at a high level of efficiency and upkeep thereby contributing directly to their outstanding record of success against the enemy…"

Following brief assignment in the Bureau of Naval Personnel, Navy Department, November-December 1945, he reported as Head of the Department of Ordnance and Gunnery at the Naval Academy. In June 1947 he assumed command of USS Topeka, and in June 1948 was detached for duty as Professor of Naval Science, in connection with Durham, North Carolina. He remained until August 1951, when he reported for instruction at the Naval War College, Newport, Rhode Island. From March 1952 until April 1953, he was Commander Destroyer Flotilla SIX, after which he served as Chief of the United States Naval Section, Joint U. S. Military Aid Group, Greece, with headquarters in Athens. In August 1955 he was ordered to duty as Commander Naval Base, Newport, Rhode Island.

Rear Admiral Earle is a member of the US Naval Institute; the Army and Navy Club, Washington, DC; the New York Yacht Club; and the Military Order of the Carabao.