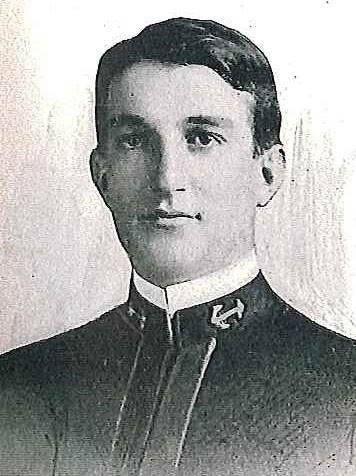 Captain Baggaley was born in Washington, DC, on November 23, 1881, and was appointed to the US Naval Academy from the Fifteenth District of Pennsylvania on September 7, 1901.  His title of ‘Naval Cadet” was changed in 1902 to that of ‘Midshipman”, and he became a “Passed Midshipman” upon graduation in 1905, to serve the two years at sea then required by law before being commissioned.  Executing the Oath of Office as Ensign in 1907, he subsequently advanced to the rank of Captain, to date from January 21, 1929.  He was transferred to the Retired List of the Navy on June 6, 1940.

During his first two years at sea Captain Baggaley had engineering duty aboard USS Pennsylvania, operating with Armored Cruiser Squadron, and duties as Watch and Division Officer of the USS R S Lancaster and of USS St. Louis.  After being commissioned Ensign in 1907, he continued duty afloat, serving consecutively in the USS St. Louis, the USS Kearsarge, USS Vermont, and USS Washington, the latter vessel a unit of Armored Cruiser Squadron, in the Washington, he made a cruise to South American Ports, to the Orient, and from manila to the east coast of the United States via the Straits of Magellan.

Successive duty in 1911 as Executive Officer and as Navigator of USS Petrel, preceded a year’s service at the Naval Academy, Annapolis, Maryland, after which he again went to sea as Senior Watch Officer aboard USS Delaware in 1913.  From May 1914 to April 1916, he was Officer-in-Charge of the Rifle Range at the Naval Station, Guantanamo Bay, Cuba.  He returned to the United States in May 1916, and reported to the Receiving Ship at Norfolk, Virginia, where he served until May 1, 1918, first as Executive Officer, in command of the Receiving Ship, with additional duty as Commandant of the Naval Training Station, St. Helen, Virginia.

Captain Baggaley had duty afloat during the latter months of World War I and until March 19, 1919, as Executive Officer of the transport, USS De Kalb (formerly the PRINZ EITHEL FREDERICK, ex-German vessel).  Reporting to the William Cramp and Sons Company, Philadelphia, for duty in connection with fitting out USS Dupont, he assumed command when that destroyer was commissioned on April 30, 1919.  He served as her Commanding Officer until August 5, 1920, during which period he participated in the flight of the N 1-3-4 across the Atlantic.

Transferred to USS Humphreys in August 1920, and following her commissioning, August 30, he commanded the Humphreys in the Near East for a year, participating in the evacuation of the Crimea of General Wrangle’s forces.

Instruction at the Naval War College, Newport, Rhode Island, preceded duty from June until December 1922 as Naval Member of the Commission to Brazil at Rio de Janeiro, and from December 22, 1922 to January 21, 1924, as a member of the first large US Naval Mission to Brazil.  During the latter period, Captain Baggaley was an instructor at the Brazillian War College.  He returned to the United States and served for one year in the Receiving Ship, New York, New York, before reporting to USS Nevada for duty from March 1925 until May 1927 as Executive Officer.

Captain Baggaley was Secretary to the General Board, Navy Department, Washington, DC, from May to September 1927, after which he proceeded to Asiatic Station for a two year tour of duty as Assistant Chief of Staff to the Commander in Chief, Asiatic Fleet.  He returned to the United States in October 1929, and served until November 1932 as Assistant Director of Naval Intelligence, Office of Naval Operations, Navy Department, Washington, DC.

Captain Baggaley assumed command of USS Houston on January 3, 1933 and remained in command, while that heavy cruiser operated as Flagship of the Asiatic Fleet, until relieved, on June 6, 1934.  He then returned to the Naval War College, where he completed the advanced course.  He had duty from July 1935 until November 1936 as Chief of Staff and Aide to the Commandant, Fifteenth Naval District, Balboa, Canal Zone.

Assigned duty in January 1937 in the Bureau of Navigation and shortly thereafter in the Office of the Chief of Naval Operations, Captain Baggaley was detached on June 14 of that year and ordered to duty as Commander, Destroyer Squadron One, Scouting Force (redesignated Destroyer Squadron One, Battle Force), operating in the Pacific, where he served until December 27, 1938.

Duty from January 30 until July 31, 1939, at the Third Naval District, New York, New York, was followed by nine months’ duty as Officer in Charge, Branch Hydrographic Office, New York, New York, after which he was relieved of all active duty.  He was transferred to the Retired List of the Navy on June 30, 1940.

Recalled to active duty, Captain Baggaley served from September 21 to October 28, 1940, in connection with the establishment of the Naval Reserve Radio School at Noroton, Connecticut.  He commanded that school from March 26, 1941, until August 7, 1941, when he became Commanding Officer of the US Naval Training Station at Noroton.  He remained in the latter command until relieved of all active duty on August 31, 1945, after the Japanese capitulation.

For outstanding service as Commanding Officer of the Naval Training School at Noroton, Connecticut, during World War II, Captain Baggaley received a Letter of Commendation, with authorization to wear the Commendation Ribbon, from the Secretary of the Navy.

“For outstanding performance of duty as Commanding Officer of the United States Naval Training School, Noroton Heights, Connecticut, from September 26, 1940, to April 30, 1945.  Exercising keen foresight and outstanding professional ability, Captain Baggaley rendered valiant service in the establishment and operation if this vital training base for indoctrinating both officers and men in the radio communications field, introducing a curriculum, which served as a model for similar schools throughout the continental United States.  Anticipating the needs of the Navy, he later reorganized the actively into an Advanced Base Communication School and constantly maintained a high standard of instruction which became known throughout the Naval Service.  Captain Baggaley’s sound judgment, inspiring leadership and constant devotion to the fulfillment of an extremely important assignment were in keeping with the highest traditions of the United States Naval Service.”

In addition to the Commendation Ribbon, Captain Baggaley has the Victory Medal, Transport Clasp (USS De Kalb), the Chinese Service Medal, and the Yangtze Service Medal (USS Pittsburgh), and is entitled to the American Defense Service Medal; the American Area Campaign Medal; and the World War II Victory Medal.  He was also awarded the Order of St. Stanislaus, Third Class, with swords and bow, by the Government of Russia.