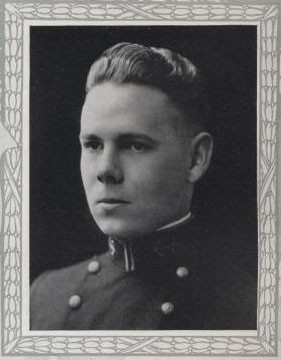 Milton Edward Miles was born in Jerome, Arizona, on 6 April 1900, son of George A. and Mrs. (Mae Belle) Miles. He attended Broadway High School, Seattle, Washington, before enlisting in the US Navy on 11 April 1917. He was discharged to accept an appointment to the US Naval Academy at Annapolis, Maryland, from the Navy at large, entering the Academy on 30 June 1918. Graduated and commissioned Ensign in June 1922, he subsequently progressed in grade to that of Rear Admiral to date from 1 July 1948.

After graduation from the Academy in June 1922, he served for five years in units of the Asiatic Fleet, having consecutive duty in the USS Pecos, flagship; USS Preble; USS Black Hawk; USS Helena; and the USS Pampanga. Returning to the United States in May 1927, he was under instruction in electrical engineering at the Postgraduate School, Annapolis, Maryland, and Columbia University, New York, until July 1929, receiving the degree of Master of Science from the latter institution. He continued instruction at various places until September 1929.

In November 1929 he joined the USS Saratoga, and served in that vessel until May 1932, when he reported for duty in the Design and Construction Division of the Bureau of Engineering, Navy Department, Washington, DC. He joined the USS Wickes as Executive Officer in July 1934, and two years later returned to Asiatic Station to serve as Squadron Material Officer on the staff of Commander Destroyer Squadron FIVE, USS Black Hawk, flagship, until the Spring of 1939.

Following brief duty in command of the USS John D. Edwards, he returned to the United States and reported in July 1939 as a Member and Recorder of the Interior Control Board, Navy Department, Washington, DC, and remained in that duty until March 1942. Ordered in the early period of World War II to duty as Commander, US Naval Group, China, he served 4 May 1942 until August 1945, first in the rank of Commodore, later in the temporary rank of Rear Admiral. During the War, members of the US Naval Group in China served in scores of Chinese units all over that country and contributed vitally to the smashing blows of the Pacific Fleet against Japanese-held islands, the Japanese Navy, and, finally, the Japanese homeland.

"Friendship Project," as it was first called, began in the first few weeks after the attack on Pearl Harbor, Territory of Hawaii, 7 December 1941, when the US Navy and the National Military Council of China, laying immediate foundations for offensive action against Japan, moved to establish a weather service in the Japanese held areas out of which the weather comes across China and Japan into the Pacific. The Sino-American Cooperation Organization - "SACO" - worked to integrate the common interests of the Chinese Central Government and the US Navy in the war against Japan. General Tai Li was appointed Director and Rear Admiral Miles was appointed Deputy Director. 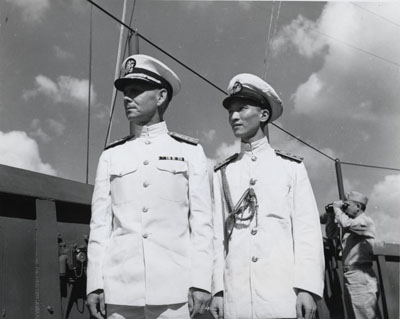 Under this agreement, China and the United States operated what is probably the most closely integrated allied organization that ever surmounted a language barrier. Chinese and American personnel lived, worked and fought side by side, knowing that they were the only source of essential intelligence in China for the prowling US Fleet and for Allied submarines just off the coast. SACO units set up weather, communications and intelligence stations all the way from the borders of Indo-China to the northern reaches of the Gobi Desert, with a concentration of activity along the China Coast behind the north-south Japanese lines. Aided by the Chinese Government, the Fleet was getting regular weather reports from many occupied areas in the Far East by the end of 1942.

He, with some of his troops, was isolated by the enemy when news of the Japanese surrender reached them five days after the war was over. For his services in China, he was awarded the Distinguished Service Medal and the Legion of Merit by the Navy, and an Oak Leaf Cluster in lieu of the Second Legion of Merit by the Army.

In September 1946 he was ordered to temporary duty in the Office of Naval History, Navy Department Public Relations Office, Washington, DC, to complete the writing of the history of the US Naval Group in China. Having reverted to the rank of Captain on 1 October 1946, he reported the following month to duty as Commanding Officer of the USS Columbus, and remained in that command until ordered on 15 October 1947 to duty as Planning Officer on the staff of Commander Service Force, Atlantic Fleet.

Following the President's approval of his selection to the rank of Rear Admiral, he assumed command on 13 December 1948 of Cruiser Division TEN. On 10 March 1949 he reported as Commander, Cruiser Division SIX, and on 29 November 1949, transferred to command of Cruiser Division FOUR. He remained in tht assignment until 1 June 1950, when he became Director, Pan-American Affairs and US Naval Missions, in the Office of the chief of Naval Operations, Navy Department, Washington, DC, and as Senior Naval Delegate to the Inter-American Defense Board. He became Commandant Fifteenth Naval District, with headquarters in Balboa, Canal Zone, on 8 February 1954. He was awarded a Gold Star in lieu of the Third Legion of Merit for exceptionally meritorious conduct as Commander Task Group 84.7, Yucatan Peninsula and Tampico, Mexico, United States Military Joint Disaster Relief Operation, from 30 September to 20 October 1955. He skillfully coordinated and directed the joint forces under his command in carrying out rescue operations following the hurricane and flood disaster.

Returning to the United States, he reported on 31 July 1956 as Commandant of the Third Naval District, headquarters in New York, New York, with additional duty as Commander Naval Base, Brooklyn. He continued to serve in that assignment until relieved of all active duty pending his retirement, effective 1 February 1958. Upon retirement he was advanced to the rank of Vice Admiral on the basis of combat awards. 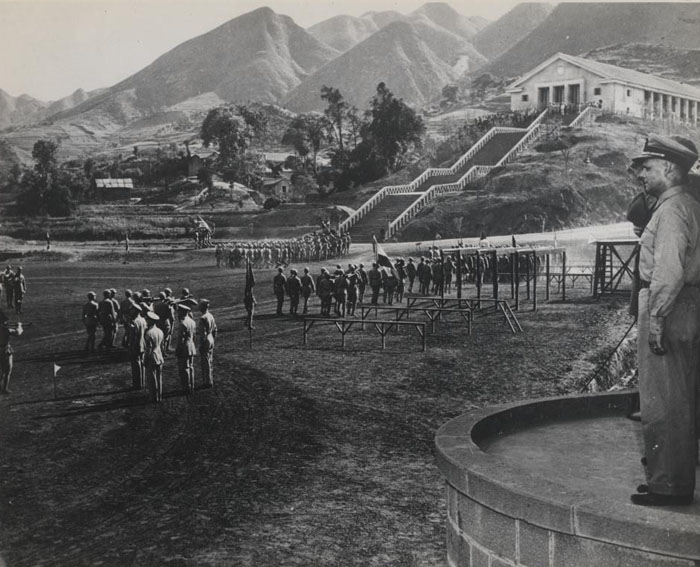 Caption: US Navy "Task Force" trained guerillas in China! With the war's end removing the need for secuirty, the US Navy and the Chinese government reveal that a "task force" of Navy, Marine and Coast guard personnel has been operating with Chinese forces in China since 1942. Their first activity - the forwarding of weather information - was soon expanded to include intelligence work and the training and equiping of Chinese guerillas for missions against the Japs. Known at the outset as the "Friendship Project," then later as "SACO-Sino-American Cooperative Organization" the group was under the command of Rear Admiral (then Commander) Milton E. Miles, USN. Operating over a vast terrain extending from Indo China to Gobi Desert, SACO made an invaluable contribution to the common victory, and furthered to a memorable degree the bonds of friendship between the US and China.

He wrote a book, A Different Kind of War: The Little-Known Story of the Combined Guerrilla Forces Created in China by the US Navy and the Chinese During World War II, published in 1967 by Doubleday.