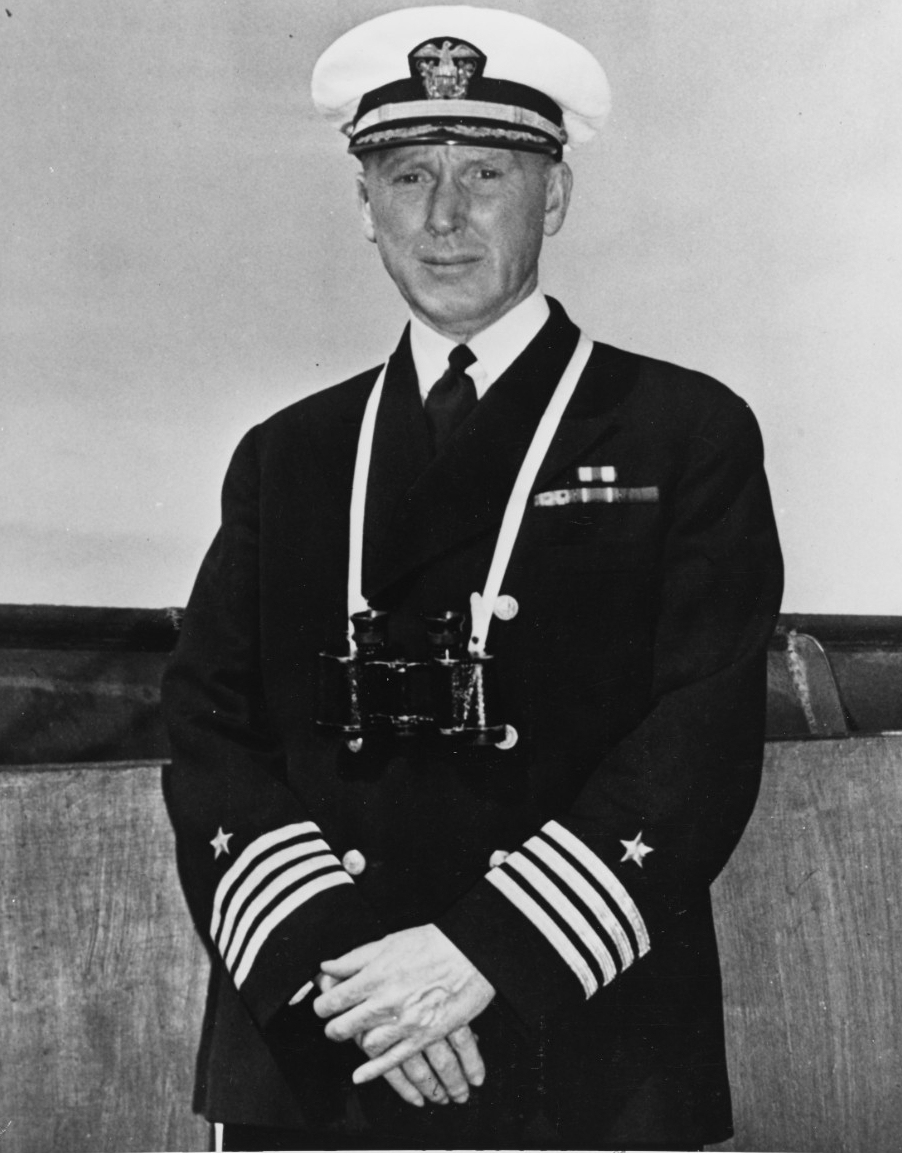 Rear Admiral Scott was born at Indianapolis, Indiana, 10 August 1889. He attended Shortridge High School, Indianapolis, before being appointed to the Naval Academy by Senator Beveridge of Indiana in 1907.

After graduation in 1911, he was assigned to duty in USS Idaho. He was detached from that battleship in July 1913, and had successive tours of duty in USS Jenkins, USS Dixie and USS Ammen until 15 July 1916, when he joined USS Jacob Jones, and was Executive Officer of that destroyer when she was sunk by an enemy submarine between Brest, France and Queenstown, Ireland on 6 December 1917. For that duty he was awarded a Special Letter of Commendation as follows:

"As Executive Officer of the USS Jacob Jones on the occasion of the torpedoing of that vessel on December 6th, 1917, he showed marked energy, zeal and coolness and displayed excellent seamanship in getting life belts and splinter nets from the bridge into the water, encouraging and helping the men in general, doing everything possible demanded by the emergency in the short time available."

After the sinking of the USS Jacob Jones, Rear Admiral Scott was assigned to USS Melville. He returned to the United States in January, 1918, and served in the Office of the Chief of Naval Operations, Navy Department, Washington, until March 1919. On 26 September 1918, he was given additional duty as Naval Aide to the President.

His next duty was in command of an Eagle Division outfitting for distance service. He served first in Eagle #3, later in Eagle #2, until 26 December 1919, when he joined USS Dupont for passage to Constantinople. Upon arrival there he took command of Eagle #1, and resumed his former duties.

He returned to the United States in February 1920, and was on duty in the Navy Department, Washington, DC, until June of that year, serving first in Naval Communications, later in the Bureau of Navigation.

Rear Admiral Scott had duty in connection with fitting out USS Stoddert at the Bethlehem Shipbuilding Corporation plant; San Francisco, California, in 1920, and went aboard that vessel as Executive Officer when she was commissioned 30 June 1920. He served as Assistant Fire Control Officer in USS New York from August 1920 to May 1921. After a year's service in USS Burns he reported to the Fourteenth Naval District for duty in July 1922. From August 1923 to July 1924, he served as Aide to the Commandant, Fourteenth Naval District. He joined USS Idaho in July 1924, and in September of that year he was appointed Aide on Staff of Commander, Battle Fleet, USS California, Flagship with additional duty as Fleet Personnel Officer.

Rear Admiral Scott had a tour of duty as instructor in the Department of Electrical Engineering and Physics at the Naval Academy from September 1927 until June 1930. His next duty was in the Asiatic Fleet where he served in USS Jason and later had command of USS Mac Leish and of USS Paul Jones. He had a tour of duty in the Bureau of Navigation, Navy Department, from August 1932 until June 1934, when he reported to the Naval War College, Newport, Rhode Island, for the senior course. He returned to sea in USS Cincinnati in June 1934, with duty as Executive Officer. 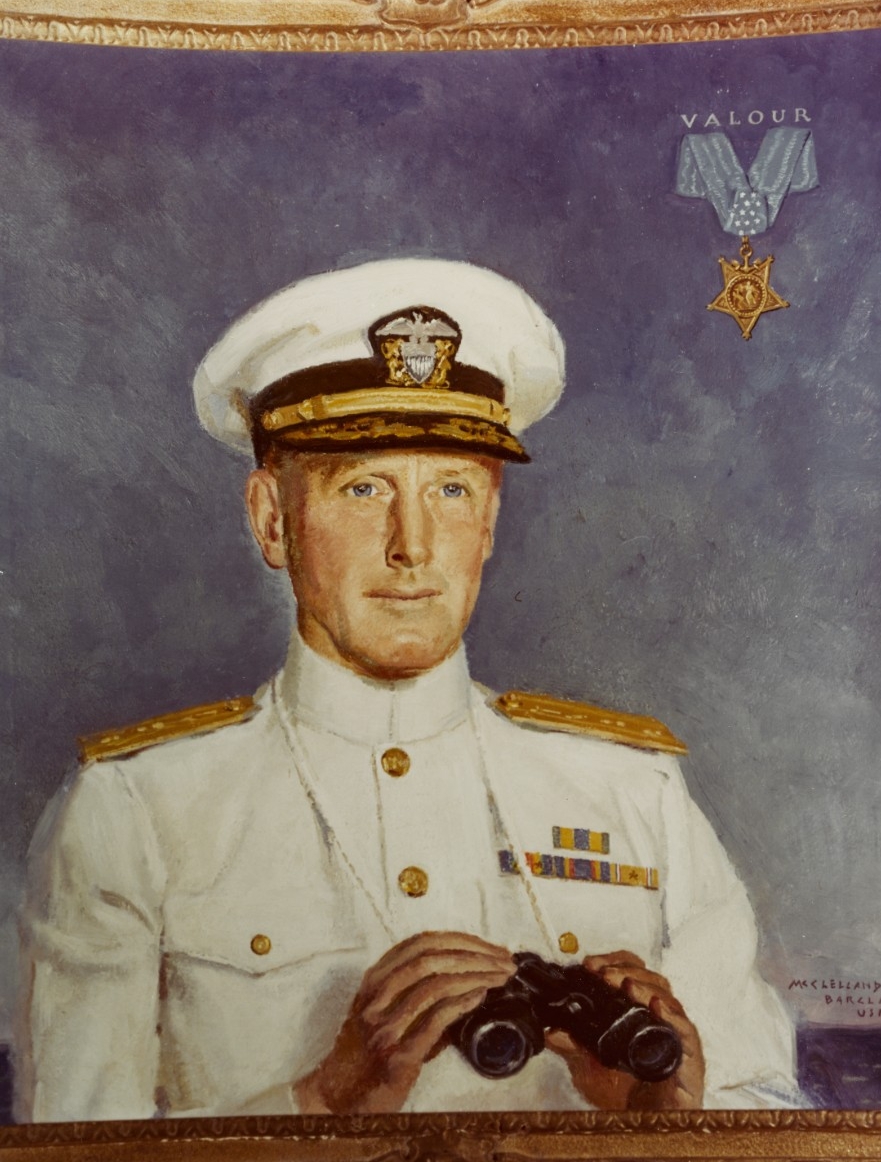 Rear Admiral Scott was a member of the United States Naval Mission to Brazil from February 1937 to November 1939. Upon his return to the United States, he assumed command of USS Pensacola. After a tour of duty in the Office of the Chief of Naval Operations, Navy Department, Washington, DC, he was ordered to sea in June 1942.

Rear Admiral Scott was killed in action during the Battle of Guadalcanal on 13 November 1942, while in command of a Task Force.

On 9 December 1942, the President presented the Medal of Honor to Rear Admiral Scott's family. Midshipman Norman Scott, Jr. accepted the award in his father's behalf. The citation was as follows:

Medal of Honor:
"For extraordinary heroism and conspicuous intrepidity above and beyond the call of duty during action against enemy Japanese forces during the Battle of Cape Esperance on the night of October 11-12, and again during the Battle of Guadalcanal on the night of November 12-13, 1942. In the earlier action, intercepting a Japanese task force intent upon storming our island positions and landing reinforcements at Guadalcanal, Rear Admiral Scott, with courageous skill and superb coordination of the units under his command, destroyed eight hostile vessels and put the others to flight. Again challenged, a month later, by the return of a stubborn and persistent foe, he led his force into a desperate battle against tremendous odds, directing close-range operations against the invading enemy until he himself was killed in the furious bombardment by their superior fire-power. On each of those occasions his dauntless initiative, inspiring leadership and judicious foresight in a crisis of grave responsibility contributed decisively to the rout of a powerful invasion fleet and to the consequent frustration of a formidable Japanese offensive. He gallantly gave up his life in the service of his country."

In addition to the Medal of Honor, Rear Admiral Scott was posthumously awarded the Purple Heart Medal, and was entitled to the ribbon for, and a facsimile of the Presidential Unit Citation awarded the USS Atlanta with the following citation :

Presidential Unit Citation, USS Atlanta:
"For outstanding performance during action against enemy Japanese forces off Guadalcanal Island, November 12-13, 1942. Struck one torpedo and no less than 49 shells, the Atlanta, after sinking an enemy destroyer and repeatedly hitting a cruiser which later went down, gallantly remained in battle under auxiliary power with one-third of her crew killed or missing, her engine room flooded and her topside a shambles. Eventually succumbing to her wounds after the enemy had fled in defeat, she left behind her a heroic example of invincible fighting spirit."

The Destroyer USS Norman Scott, DD-690, was named in honor of Rear Admiral Scott. His widow, Mrs. Marjorie Scott, sponsored this ship when she was launched on 28 August 1945, at the plant of the Bath Iron Works Corporation, Bath, Maine.