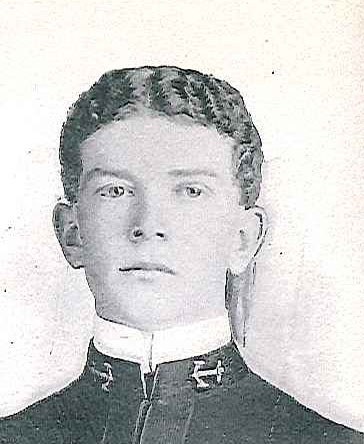 Theodore Gordon Ellyson, the first Naval officer to qualify as an airplane pilot, and distinguished pioneer of US Naval Aviation, was born on February 27, 1885, in Richmond, Virginia.

Appointed Naval Cadet, he entered the US Naval Academy, Annapolis, Maryland, from the Third District of Virginia in June 1901, and was graduated with the Class of 1905, on January 30, 1905. After the two years at sea, then requited by law before commissioning, he was commissioned Ensign in the US Navy on January 31, 1907, and subsequently advanced as follows: Lieutenant, junior grade, on January 31, 1910; Lieutenant, September 16, 1910; Lieutenant Commander, May 23, 1917; and Commander on July 1, 1918.

During the five years following his graduation from the Naval Academy in 1905, he served consecutively at sea in USS Texas at Guantanamo, Cuba; USS Missouri; as Watch and Division Officer of USS Pennsylvania, and later USS Colorado; and in USS West Virginia, USS Rainbow and USS Shark on Asiatic Station. After his return to the United States in April 1910, he commanded USS Tarantula until November of that year, then had duty in connection with fitting out the USS SEAL at the Newport News Shipbuilding and Dry Dock Company, Newport News, Virginia. He commanded her briefly after her commissioning on December 2, 1910.

Ordered on December 23, 1910, to Lon Angeles, California, for instruction in aviation under Mrs. Glenn Curtiss, pioneer aviator who had offered to train a pilot for the Navy free of charge, he reported there on January 2, 1911. While a student under Mr. Curtiss, he cooperated with his instructor in the design of pontoon for airplanes and became the first passenger ever to go aloft in a hydroaeroplane when he made a flight in February 1911, with Mr. Curtiss at the controls.

On February 17, 1911, young Ellyson (then a Lieutenant) observed the use to which airplanes might be employed aboard ships. On that day Mr. Curtiss flew the hydroplanes from North Island alongside the USS Pennsylvania at anchor in San Diego Bay, and, with Ellyson directing operations from a rowboat, the plane was hoisted aboard the ship. later it was lowered to the water and returned to North Island. Commander Ellyson, in cooperation with Mr. Curtiss then began work on a device from which a plane might be launched from a vessel.

On September 7, 1911, with Commander Ellyson piloting, a plane equipped with a slotted pontoon was successfully launched from wire cable attached to a dock at Hammondsport, New York. The wire cable apparatus was abandoned in favor of a catapult launching device being developed at the Naval Gun Factory, Washington, DC. In July 1912, flying a Curtiss A-1 Commander Ellyson attempted the first catapult shot, at AnnapolisMaryland. Is ended unsuccessfully, however, and the catapult was redesigned and mounted on a barge at the Washington, DC, Navy Yard. On November 12, 1912, he made a successful take-off from the device.

From the time Ellyson began instruction in aviation in January 1911, until April 29, 1913, he devoted all of his time to active flying and experimental work in aviation. This included the establishment of Naval Aviation Camps at Annapolis in September 1911 and at North Island, San Diego, in January 1912, and several endurance, altitudes and speed records. He made the first long distance flight ever attempted by Naval airmen, on November 3, 1911 when, with Admiral (then Lieutenant) John H. Towers, he flew a plane from Annapolis, Maryland, to Milford Haven, Virginia. The 112-mile flight required 2 hours, 2 minutes, which was a non-stop distance record for hydroaeroplanes at that time.

In 1917 he had duty at the Naval Academy and with the Midshipmen on cruise in USS Wyoming and USS Kansas. On February 14, 1918, he was detached for duty at the Submarine Chaser Base, New London, Connecticut, and in June arrived in London, England, for duty with a Submarine Chaser Squadton at US Naval Base #27, at Plymouth, England. For his war service he was awarded the Navy Cross and cited: “For distinguished service in the line of his profession as Assistant for Operations to the Commander, Submarine Chaser Detachment ONE. He was largely responsible for the development of successful submarine-chaser tactics and doctrine.”

Following the Armistice in November 1918, he remained in the European area, commanding Nucleus Crew #14 (zeppelin) from March to May 1919. Upon his arrival in the United States, he assisted in fitting out USS J. Fred Talbot at the William Cramp and Sons Co., Philadelphia, and served on board that destroyer from her commissioning, June 30, 1919, until July 1920. During the next five months he successively commanded USS Little and USS Brooks.

On January 10, 1921, he was ordered to Hampton Roads, Virginia, to serve for eight months as Executive Officer of the Naval Air Station, Naval Operating Base. The Bureau of Aeronautics was established in the Navy Department on September 1, 1921, and on October 21 Commander Ellyson became Head of the Plans Division of that Bureau. He remained in that assignment until December 1922, when he became the Aviation Member of the US Naval Mission to Brazil, cooperating in the reorganization of the Brazilian Navy. He returned to the Bureau of Aeronautics in May 1925.

On July 20, 1925, he assumed command of Torpedo Squadron ONE, and from March to June 1926 was Executive Officer of USS Wright, seaplane tender. On June 23, 1926, he was ordered to duty in connection withfitting out the USS Lexington, the Navy’s second aircraft carrier and was on board when she was placed in commission. The Lexington and her sister ship, USS Saratoga, were originally designed for battle cruisers, but during their construction were changed to aircraft carriers as a result of the Limitation of Armament Treaty.

Commander Ellyson was killed on February 27, 1928, his forty-third birthday, in a crash of an airplane in lower Chesapeake Bay, while on a night flight from Norfolk, Virginia, to Annapolis, Maryland.

In addition to the Navy Cross, Commander Ellyson had the Victory Medal, Submarine Chaser Clasp. On February 27, 1941, fifty-six years from the date of his birth and thirteen years after his death, announcement was made of the naming of a new auxiliary airfield at the Naval Air Station, Pensacola, Florida, ELLYSON FIELD, in honor of the late Commander Theodore G. Ellyson, USN.

The USS Ellyson (DD-454), built just prior to World War II, was also named to honor Commander Ellyson. Built under authorization of Act of Congress of May 17, 1938, by the Federal Shipbuilding and Dry Dock Company, Kearny, New Jersey, USS Ellyson was constructed with a peace- time precision which made her one of the fastest destroyers ever to hit the waterways for any navy. When launched on July 5, 1941, she was christened by Miss Gordon Ellyson, daughter of Commander Ellyson. Commissioned on November 28, 1941, USS Ellyson had a distinguished World War II record, first in the Atlantic, later the Pacific, serving as the flagship of Fleet Units from June 15, 1942, throughout the remainder of the war.