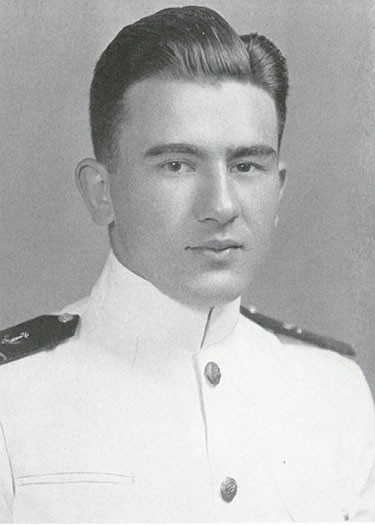 Theodore Montanye Ustick was born in St. Paul, Minnesota, on 15 July 1915, son of Mrs. Mary Wheeler Ustick and the late Dr. C.M. Ustick. He attended Polytechnic High School and Junior College in Long Beach, California, before his appointment to the US Naval Academy, Annapolis, Maryland, in 1935. As a Midshipman he played varsity football; was a member of the crew and riffle team for one year; and was a member of the Glee Club. Graduated with a Bachelor of Science degree and commissioned Ensign on 1 June 1939, he subsequently attained the rank of Commander, to date from 13 May 1949.

Following graduation from the Naval Academy in June 1939, he served for a year in the USS Arizona (BB 39) as a junior officer in the engineering division. From July to December 1940 he had duty as Torpedo and Gunnery Officer and First Lieutenant of the USS Aylin (DD 355). Reporting to the Submarine School, New London, Connecticut, he completed the course in April 1941, and was assigned the next month to the USS Tarpon. During the early period of World War II, until November 1943, he had duty variously as Gunnery, Torpedo, Communication and Executive Officer of that submarine.

He was awarded the Silver Star Medal for “conspicuous gallantry and intrepidity in action as Torpedo Data Computer Operatpr...during the Sixth War Patrol of his ship in enemy Japanese-controlled Pacific waters during World War II...(He) contributed materially to the destruction of 21,000 tons of enemy shipping...”

In December 1943 he joined the USS Spadefish (SS 411) as Executive Officer and Navigator. He was entitled to the Ribbon for and a facsimile of the Presidential Unit Citation awarded that submarine for “extraordinary heroism in action during the First and Second War Patrols against enemy Japanese forces in the restricted waters of the Pacific... To complete an illustrious record of combat achievement in vital Japanese ships sunk or damaged...” During her first War Patrol he assisted his Commanding Officer to sink six enemy ships and damage two others despite severe hostile countermeasures, and for “conspicuous gallantry and intrepidity as Assistance Approach Officer of the USS SPADEFISH...from July 23 to September 24, 1944...” He was awarded a Gold Star in lieu of the second Silver Star Medal.

Detached from the Spadefish in December 1944, he assumed command in January 1945, of the USS Sea Raven (SS 196), and after five months in that submarine was transferred to command of the USS Rock (SS 275), in which command he remained throughout the last months of World War II hostilities, and until May 1946. During June and July of that year he was Commanding Officer of the USS Devilfish (SS 292).

He returned to the Naval Academy in July 1946, and after a tour of duty as an instructor in Marine Engineering there was ordered to duty afloat in June 1948, serving until October 1949 as Commanding Officer of the USS Sea Poacher (SS 406). In November 1949 he reported to the Navy Department, Washington, DC, was assigned duty in the Operations Division of the Military Sea Transportation Service.

In addition to the Silver Star Medal with Gold Star and the Presidential Unit Citation Ribbon (USS SPADEFISH), Commander Ustick had the Army Distinguished Unit Badge; the American Defense Service Medal; and the Philippine Defense Ribbon. He wore the Submarine Combat Insignia with six stars.