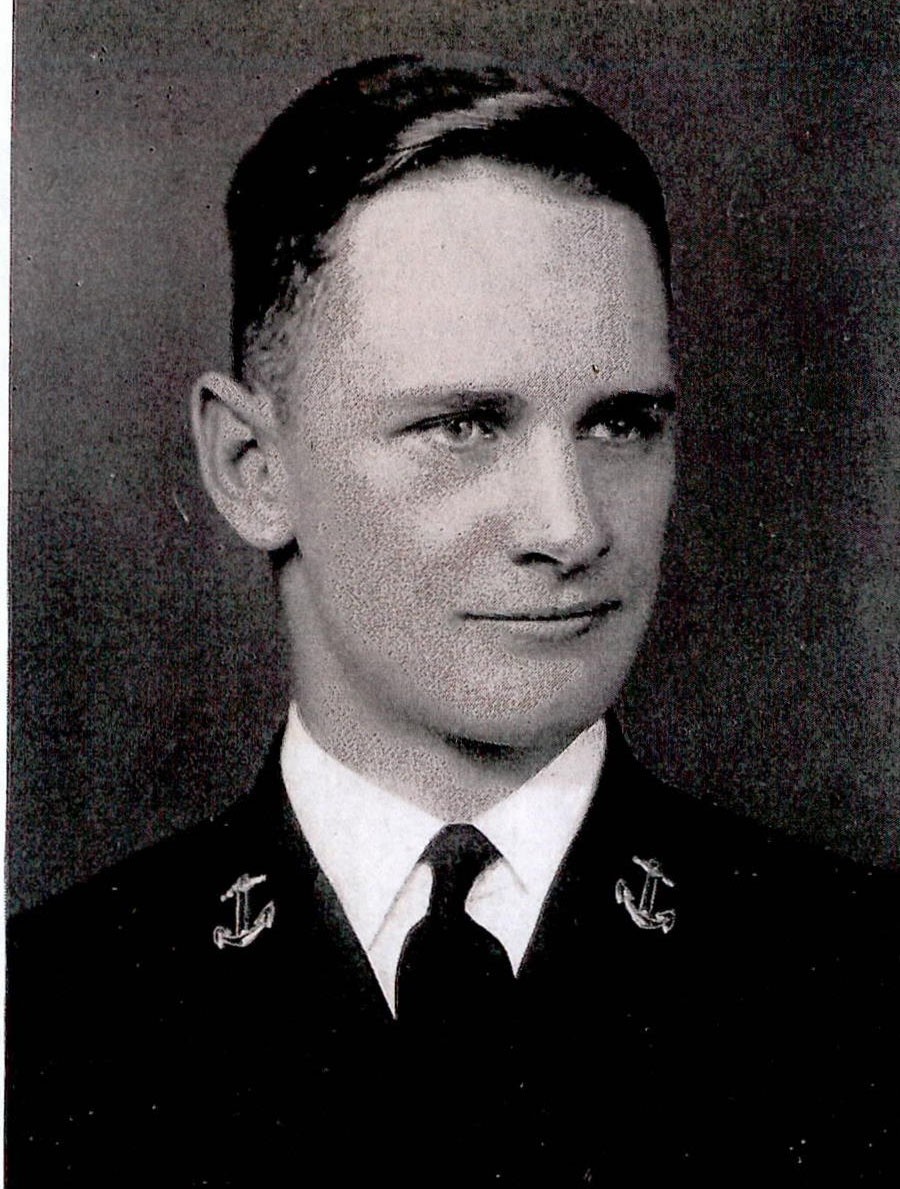 Anthony Christian Benjes, Jr., was born in Claremont, New Hampshire, on August 5, 1918, son of A. C. Benjes, Sr. and Mrs. (Lillian Hastings Lovejoy) Benjes. He attended Lebanon (New Hampshire) High School, before entering the US Naval Academy, Annapolis, Maryland, on appointment from his native state on June 20, 1936. As a Midshipman he played “Plebe” Football, and was a member of the Junior Varsity Crew for three years. Graduated and commissioned Ensign on June 6, 1940, he subsequently advanced in rank to that of Captain, to date from April 1, 1959.

Upon graduation from the Naval Academy in June 1940, he was assigned to USS Cincinnati on the West Coast and served as First Division Officer and Radar Officer on board that cruiser until June 1942. He then attended Naval Reserve Radio School, Bowdoin College, Brunswick, Maine, and for a short period had duty at the Naval Research Laboratory, Anacostia, DC. He reported in July 1942 for flight training at the Naval Air Station, Pensacola, Florida, and continued training at the Naval Air Stations, Jacksonville, Florida and Quonset Point, Rhode Island.

Designated Naval Aviator in July 1943, he next had duty in connection with night fighter development with Project “A,” at Quonset Point, Rhode Island, and in December that year joined Night Fighting Squadron SEVENTY-SEVEN, based on USS Yorktown (CVS-10). As Executive Officer of that squadron, he participated in the Marianas and Philippine Campaigns. He is entitled to the Ribbon for, and a facsimile of the Presidential Unit Citation awarded the USS Yorktown and was personally awarded the Distinguished Flying Cross. The citation for the latter follows, in part:

“For heroism and extraordinary achievement …during operations against enemy Japanese forces in the vicinity of the Marianas, June 11, 1944. Participating in a daring mission over enemy-held territory, (he) instantly intercepted an enemy bomber at night, and pressing home his attack, succeeded in sending the enemy craft crashing…”

In October 1944 he joined the Night Fighting Detachment of Fighting Squadron THIRTEEN, attached to USS Franklin, and while in that assignment participated in the Philippine Campaign. “For heroism and extraordinary achievement…during action enemy Japanese forces in the vicinity of the Bonin Islands, on September 1, 1944…” he was awarded a Gold Star in lieu of the Second Distinguished Flying Cross. The citation further states:

“An alert and aggressive airman, (he) pressed home a vigorous attack to destroy an enemy patrol aircraft which threatened the security of the task group. His outstanding skill, cool courage and zealous devotion to duty in the face of adverse weather conditions were contributing factors in the success of our operations against the enemy in this area….”

Returning to the United States, he reported in January 1945 for training with the Night Attack and Combat Training Unit, Atlantic, Naval Air Station, Charleston, Rhode Island, and in August that year assumed command of Night Fighting Squadron FIFTY-THREE. He was a student at the Postgraduate School, Annapolis, Maryland, from July 1946 until June 1948, then continued instruction at the Massachusetts Institute of Technology, Cambridge, receiving the degree of Master of Science in aeronautical engineering in September 1949. After an assignment in the Armament Division, Bureau of Aeronautics, Navy Department, Washington, DC, he reported in July 1952 for duty in the Armament Test Division, Naval Air Test Division, Naval Air Test Center, Patuxent River, Maryland.

In July 1955 he joined the Staff of Commander Naval Air Force, Pacific Fleet and served as Avionics and Ordnance Officer until July 1948. The next month he became Fighter Design Officer in the Bureau of Aeronautics (later combined with the Bureau of Ordnance and designated the bureau of Naval Weapons). He remained there until December 1960, after which he served as Fleet Ballistic Missile Special Project Officer at the Naval Ordnance Test Unit, Atlantic Missile Range, Patrick Air Force Base, Florida. He assumed command of that unit in June 1963. In July 1964 he reported as Director of the Anti-Submarine Laboratory, Naval Air Development Center, Johnsville, Pennsylvania, and in April 1965 was designated Commanding Officer of the Naval Air Development Center, Johnsville.