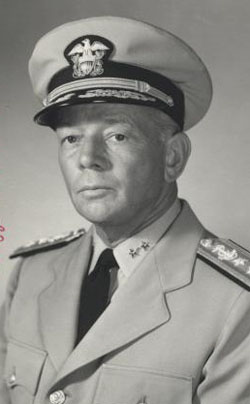 Lynne Cline Quiggle was born on 22 May 1906, in Grand Island, Nebraska, son of H.G. and Frances (Kalous) Quiggle. He attended Kearney (Nebraska) High School and on 12 September 1924 enlisted in the US Navy. Honorably discharged on 17 June 1926, he accepted an appointment (from his native state) the same month to the US Naval Academy, Annapolis, Maryland. Graduated and commissioned Ensign on 5 June 1930, he subsequently attained the rank of Captain, to date from 1 March 1946, having served in that rank (temporary) from 1 March 1946 until 1 January 1948. His selection for the rank of Rear Admiral was approved by the President on 17 July 1956. His date of rank is 1 August 1957.

Following graduation in 1930, he reported on board the USS Idaho and in September 1931 transferred to the USS New York. He served in that battleship until April 1934, when he was ordered to the Navy Yard, Puget Sound, Washington, where the USS Astoria was building. He joined that cruiser upon her commissioning, 28 April 1934, and when detached two years later, was assigned (April 1936) to the USS Lamberton.

Between June 1937 and May 1939 he attended a course in ordnance engineering (general) at the Postgraduate School, Annapolis, Maryland, continuing instruction until September of that year at the Navy Yard, Washington, DC. He then assisted in the fitting out of the USS Aaron Ward at the Bethlehem Steel Corporation, San Pedro, California. He served as her Executive Officer from her commissioning on 28 October 1939 until September 1940, when he joined the USS Chester.

Detached from the Chester in November 1941, he was assigned to the Office of the Chief of Naval Operations, Navy Department, Washington, DC, and in February 1942 became Aide to the Chief of Naval Operations. He continued duty in that capacity until April 1942, assuming command, the next month, of the USS Overton. Upon relief in December 1942 he reported for fitting out duty in the USS Iowa at the Navy Yard, Norfolk, Virginia. He joined that battleship as Gunnery Officer when she was commissioned on 22 February 1943.

He was on board the Iowa when she transported the late President Franklin D. Roosevelt to and from the Allied Conference at Teheran in November 1943. In January 1944 the Iowa was transferred to the Pacific, when she supported the air strikes against Kwajalein and Eniwetok Atolls in the Marshall Islands; Truk in the Caroline Islands and Tinian in the Marianas. "For meritorious service as Gunnery Officer of the USS Iowa from February 1943 to March 1944..." he was awarded the Bronze Star Medal with Combat "V." The citation further states:

"By his ability to organize and train the personnel of his department, (he) was in large measure responsible for bringing the gunnery crew of this newly commissioned battleship to a high state of efficiency with excellent results during her first encounter with the enemy..."

From May 1944 to June 1945 he was assigned to the Bureau of Ordnance, Navy Department, and for his "great determination to the tremendous task of planning the production of the weapons of war..." he received a Letter of Commendation from the Chief of the Bureau.

He again reported on board the Iowa to serve as her Executive Officer until March 1946, when he joined the Staff of the Commander in Chief, US Pacific Fleet. In September 1948 he became Commander Destroyer Division ONE HUNDRED AND FIFTY-TWO, and in April 1949 transferred to Destroyer Division THIRTY-TWO, to command that division until November 1949. He was then assigned to the Office of the Chief of Naval Operations, where he served as Head of the Atlantic, European, and Middle East Section, Strategic Plans Division.

In February 1953 he assumed command of the USS Mt. Olympus, flagship of Commander Amphibious Group TWO, US Atlantic Fleet, and in October 1953 was detached to serve as Executive Officer of the Plans and Operations Division on the Staff of the Commander in Chief, Allied Forces, Southern Europe. He continued to serve in that capacity until December 1955, and in February 1956 broke his pennant in the USS Cambria as Commander Transport Amphibious Squadron EIGHT. In August 1956 he assumed duty as Resident Member, United Nations Command, Military Armistice Commission, and in March 1957 was assigned to the Joint Staff, Commander in Chief, Far East. Four months later he became Deputy Chief of Staff, Joint Staff, Commander, United States Forces, Japan. In January 1958 he was found missing from the ocean liner President Cleveland, about 800 miles off the California Coast, while enroute to San Diego from Japan.

He was married to the former Anne Griffith of Washington, DC, and they had one son.