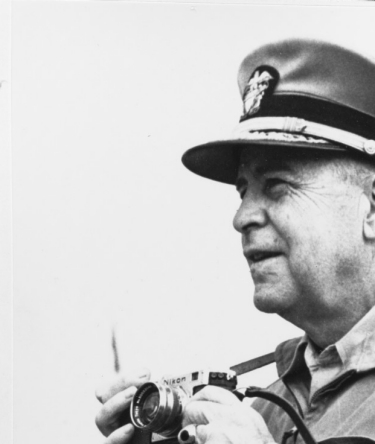 Charles Turner Joy was born in St. Louis, Missouri, on 17 February 1895, son of the late Duncan and Lucy (Turner) Joy. He attended Phillips Academy, St. Louis, Missouri; Heathcote Hall, Rye, New York; and St. Lukes School, Wayne, Pennsylvania, before entering the US Naval Academy, Annapolis, Maryland, by Congressional appointment from the Twenty-second Illinois District in 1912. While at the Academy he was a member of his class baseball and basketball teams and of the Academy tennis team, being manager of the latter for one year. Graduated and commissioned Ensign on 3 June 1916, he subsequently attained the rank of Vice Admiral to date from 1 August 1949. On 1 July 1954 he was transferred to the Retired List of the US Navy, and was advanced to the rank of Admiral on the basis of combat awards.

After graduation from the Naval Academy in 1916, he was assigned to the USS Pennsylvania, which in October of the same year became flagship of the Commander in Chief, US Atlantic Fleet. In December 1918 the Pennsylvania escorted President Woodrow Wilson on his historic visit to France aboard the USS George Washington. Detached from the Pennsylvania, he reported in January 1921 for instruction in ordnance engineering at the Postgraduate School, Annapolis, Maryland. He continued the course at various places between September 1921 and October 1923, including the University of Michigan at Ann Arbor, from which he received the degree of Master of Science.

On 15 November 1923 he joined the Staff of Commander Yangtze Patrol, as Aide and Flag Lieutenant, continuing to serve in that assignment until October 1925. Following duty as Executive Officer of the USS Pope, operating with the Asiatic Fleet, he was assigned in May 1926 to the Aviation Ordnance Section in the Bureau of Ordnance, Navy Department, Washington, DC. In January 1928 he reported aboard the USS California as Assistant Gunnery Officer. Detached from that battleship in May 1931, he served two years as Ordnance Officer at the Naval Mine Depot, Yorktown, Virginia.

He assumed command of the USS Litchfield in May 1933, and upon relief in March 1935, joined the Staff of Commander Destroyer Battle Force, as Gunnery and Operations Officer. Between 19 June and May 1940 he had duty first, as Executive Officer and later, Head of the Department of Ordnance and Gunnery, at the Naval Academy. Completing service in February 1941 as Executive Officer of the USS Indianapolis, operating with the Scouting Force, he became Operations Officer of the Staff of Commander Scouting Force, with the USS Indianapolis, and later the USS Lexington as flagships. He was in this assignment when war was declared on the Axis Powers on 6 December 1941, and subsequently participated in the Battle of Bougainville on 20 February 1942, and the raid on Salamaua and Lae on 10 March of that year.

"For meritorious service as Operations Officer on the Staff of Commander Task Force ELEVEN...during operations against the enemy Japanese forces in the Pacific War Area from December 7, 1941 to March 26, 1942..." he was awarded the Bronze Star Medal with Combat "V." The citation continues in part: "During this critical period when the enemy was rapidly extending his forces toward Australia and New Zealand, (he) skillfully advised his Commanding Officer in the effective operations of the Task Force. Efficiently formulating plans for his organization, he was greatly responsible for the success of two engagements in which the Task Force destroyed sixteen attacking hostile bombers and two scouting planes east of Rabaul and sank or damaged fifteen Japanese combatant and merchant ships off New Guinea with the loss of only one plane..."

From September 1942 to June 1943 he commanded the USS Louisville, and while he was aboard that cruiser, she participated in the occupation of Adak, in the Aleutian Islands during September and October 1942. On 29 January 1943 the Louisville, attached to Task Force EIGHTEEN operating off Guadalcanal, was attacked by enemy Japanese planes at Rennell Island. However, she was not damaged but did feel the shock of a possible torpedo "dud." Later, the Louisville saw action in the Aleutian Islands Campaign, 24 April to 24 June 1943, resulting in the occupation of Attu Island.

He was awarded the Legion of Merit with Combat "V," for "meritorious conduct...as Commanding Officer of the USS Louisville during action against enemy Japanese forces...from January 17 to June 24, 1943. Serving with distinction during this critical period, (he) rendered valiant assistance in the battle of Rennell Islands, the assault and capture of Guadalcanal, the Aleutian Islands campaign and the capture and occupation of Attu Island. Skillfully directing his command on the night of January 29-30, he succeeded in taking in tow a crippled United States warship while under enemy attack, and despite the added handicap of darkness removed her from the danger zone..."

In August 1943 he became Head of the Pacific Plans Division at Headquarters, Commander in Chief, US Fleet, Navy Department, and in May 1944 was again assigned sea duty as Commander Cruiser Division SIX, Pacific Fleet. While in that command, Cruiser Division SIX participated in the assault on Saipan, Marianas Islands, 14-15 June, the First Battle of the Philippine Sea, 19-20 June; the bombing and occupation of Guam Island, 6 July to 9 August 1944; operations with Task Force THIRTY Eight supporting the landings on Peleliu, Ngesebus, Angaur, Ulithi, and Morotai, 6-24 September 1944 (including the first carrier strikes against the Philippines); and carrier strikes against Okinawa Jima, Formosa, North Luzon, and Nansei Shoto, 9-13 October 1944.

He was awarded a Gold Star in lieu of a Second Legion of Merit with Combat "V," for "exceptionally meritorious conduct...while commanding a Fire Support Group during the assault and capture of an enemy Japanese held island objective. Maintaining a high standard of fighting efficiency within his command, (he) skillfully deployed his ships to utilize their maximum firepower, directing devastating bombardments against the enemy prior to the landing of our forces and in support of the amphibious assault, the establishment of beachheads and the advance of the infantry and other military units combating the Japanese...he contributed in large measure to the success of our operations against a strategically important enemy held island..."

For outstanding services as Task Unit Commander covering retirement of damaged ships from the coast of Formosa from 13 to 20 October 1944, including air action of 16 October, he was awarded a Gold Star in lieu of a Third Legion of Merit and cited in part as follows: "...Under persistent and severe attack by enemy aircraft (he) skillfully directed a special force in salvaging heavily-damaged ships in enemy-infested waters, coordinating his units to make possible the successful withdrawal of two large ships from seas close to enemy territory. Through his four-day period of almost continuous aerial attacks, (he) carried out his assignment despite the constant threat of Japanese surface and submarine offensive action..."

In 1944 his task unit supported landings on Leyte, 17-20 October; participating in the second Battle of the Philippine Sea, 24-26 October, including the antiaircraft action off Luzon 30 October, joined a fast carrier task force against the Central Philippines on 20 October and 11-14 November; and supported landings on Mindoro Island, 10-24 December. In Philippine waters, 3-9 January 1945, the task Force operated with the THIRD Fleet in the sweep through the South China Sea on 10-20 January in support of landings at Lingayen Gulf, and in the antiaircraft action off Formosa the night of 21 January.

During the period 1-27 February 1945, he was Task Unit Commander with Task Group FIFTY EIGHT POINT TWO in air strikes against the Japanese Empire and the Bonins in support of landings in Iwo Jima. On 21-22 February, he was temporarily assigned to task Force FIFTY ONE for gunfire support at the objective. "For exceptionally meritorious conduct...as Senior Officer Present Afloat on the Eastern shore of Okinawa Island and as Commander of a Cruiser Division, a task Group and a Fire Support Unit from March through May 1945..." he was awarded a Gold Star in lieu of the Fourth Legion of Merit with Combat "V." The citation continues in part: "Effectively maneuvering his group during a Japanese air attack on April 20, (he) was instrumental in preventing damage to the ships of his command. Performing invaluable service as Senior Officer Present Afloat in Buckner Bay from May 13 to 27, he directed the unloading operations, arranged salvage and rescue operations and carried out fire support duties in the face of intense enemy air and Kamikaze attacks...

Detached from command of Cruiser Division SIX, on 8 June 1945, he was ordered to command Amphibious Group TWO. In August 1945, when hostilities ceased, he was engaged in training that group at Coronado, California, for landings on the Empire of Japan. He became Commander Yangtze patrol Force on 7 September 1945, and after joining his flagship, the USS Nashville, proceeded to the mouth of the Yangtze River with his Task Group to clear the Yangtze of mines and entered Shanghai with Commander SEVENTH Fleet on 19 September. On 9 January 1946, he was ordered to Hong Kong as Commander Task Force SEVENTY-FOUR, and continued serving in that capacity until 17 April 1946. "For exceptionally meritorious conduct...during the period October 1, 1945 to April 20, 1946," he was awarded an Oak Leaf Cluster in lieu of a Fifth Legion of Merit from the Army.

Distinguished Service Cross (Army): "Vice Admiral C.T. Joy...United States Navy, Commander Naval Forces Far East, distinguished himself by extraordinary heroism in action against an armed enemy of the United Nations in Korea during the period 26 June to 19 October 1950...effectively directed all United Nations naval forces engaged in the Korean campaign. He materially contributed to the accomplishment of the complex tasks of reconnaissance, mine-sweeping, resupply, bombardment, and troop lifting which were essential to the early phases of the defense of South Korea, and later, to the Inchon landing which marked the beginning of the aggressor's retreat...Although one of the most hazardous ever attempted because of extreme tides, it was brilliantly successful and accomplished the purpose of severing the enemy's communications, reinforcements, and supply lines, with a minimum loss of landing forces. Finally, under extremely hazardous conditions afforded by bad weather, presence of enemy defense forces and countless unmoored mines, (he) boarded mine-sweeping vessels in the open sea at Wonsan to obtain a firsthand appraisal of the increasingly serious mine situation in order to eliminate the navigational menace..."

Distinguished Service Medal (Navy): "For exceptionally meritorious service...as Commander Naval Forces, Far East, engaged in operations against enemy aggressor forces of North Korea from 26 June to 31 December 1950...As a result of his leadership, extensive experience and farsighted planning, the difficult amphibious invasion of Inchon was achieved with minimum losses and Hungham beach head operation was effectively supported by the vigorous and continued bombardment of hostile positions by hard-hitting cruisers and destroyers..."

Distinguished Service Medal (Army): "(He) distinguished himself ...as Commander U.S. Naval forces, Far East and United Nations Command from January 1, 1951 to June 1952 and as Chief Delegate, United Nations Command Delegation in Korea from July 8, 1951 to May 22, 1952. Coincident with the outbreak of hostilities in Korea, Admiral Joy, through application of sound naval concepts and mastery of military science, commanded all United Nations Forces and brilliantly coordinated strategic and tactical matters with interrelated services in support of combat operations. As Chief Delegate, United Nations Command Delegation in Korea, Admiral Joy's comprehensive grasp of far reaching strategic and diplomatic implications was of paramount value in conducting cease-fire negotiations with envoys of the Communists Armies of China and North Korea..."

On 10 July 1951 the United Nations Command entered into the famous Korean Armistice Conference. Admiral Joy represented the United Nations as Senior Delegate at these negotiations until he was detached on 23 May 1952. He was detached as Commander US Naval Forces, Far East on 4 June 1952, and returned to the United States shortly afterward. On 4 August 1952 he relieved Vice Admiral Harry W. Hill, USN as superintendent of the US Naval Academy, Annapolis, Maryland, with additional duty as Commandant of the Severn River Naval Command (comprising Anne Arundel County, Maryland). He served as the 37th Superintendent of the Academy until relieved of all active duty pending his retirement, effective 1 July 1954.

Admiral Joy died at the Naval Hospital, San Diego, California on 13 June 1956. A destroyer, the USS Turner Joy (DD-951), has been named in his honor.