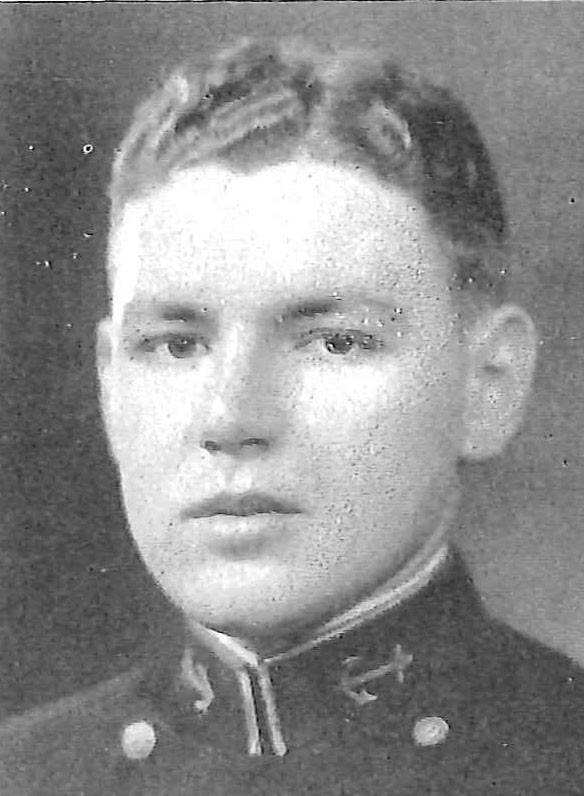 Warren Byron Christie was born in Milwaukee, Wisconsin, on January 2, 1912, son of William B. and May Frances (Graham) Christie. He attended Excelsior Springs High School in Excelsior Springs, Missouri, and entered the US Naval Academy, Annapolis, Maryland, on appointment from the state of Missouri, on June 20, 1929. He was graduated and commissioned Ensign on June 1, 1933, and through subsequent promotions attained the rank of Captain to date from January 1, 1952.

Upon graduation from the Naval Academy in June 1933, he was assigned to USS New York, a unit of Battleship Division One, Battle Force. During the four years following his detachment in April 1935, he served consecutively as Engineer Officer of USS Manley, a destroyer unit of Special Squadron, and later Drill Squadron at the Naval Academy; and as Engineer and Gunnery Officer of USS Downes, another destroyer, operating first under the Chief of Naval Operations, and later with Destroyers, Battle Force.

He returned to the Naval Academy in July 1939 in instruction in Engineering Design at the Postgraduate School, and continued the course at the Boiler and Turbine Laboratory, Fourth Naval District, Philadelphia, Pennsylvania and at the Massachusetts Institute of Technology, Cambridge, Massachusetts. He received the degree of Master of Science in Naval Engineering from the latter in June 1942. He was then ordered to the Federal Shipbuilding and Drydock Company, Kearny, New Jersey, where USS Jenkins was being fitted out and served as Engineer Officer of that destroyer from her commissioning in July 1942 until January 1943.

He was next assigned to the staff of Commander Landing Craft Flotillas, South Pacific Force, as Flag Secretary and was awarded the Bronze Star Medal with Combat “V,” The citation follows in part: “For meritorious service as Operations Officer on the staff of the Commander, Landing Craft Flotillas, Third Amphibious Force, during operations against enemy Japanese forces in the Solomon Islands Area, from February 1943 to April 1944….” The citation further states that he “efficiently carried out numerous planning and execution operations during this period of strenuous and intensive amphibious warfare and … succeeded in solving the many difficult problems encountered in combating overwhelming Japanese forces and in participating in the capture and occupation if Treasury and Green Islands…”

In May 1944 he reported to Headquarters, Twelfth Naval District, San Francisco, California, and in June and July attended the West Coast Sound School, San Diego, California. In August he assumed command of USS Ringgold and remained in that command throughout the war period and until March 1946. He was awarded a Gold Star in lieu of the Second Bronze Star Medal with citations which follows, in part:

“For distinguishing himself by heroic and meritorious achievement as Commanding Officer of a United States destroyer in connection with operations against the enemy from 1 July to 15 August 1945. During this period his ship participated in carrier strikes against Honshu and Hokkaido, and in high-speed anti-shipping sweeps along the shores of Honshu. During the night of 30-31 July 1943 his ship daringly penetrated 30 miles into Suruga Wan, Honshu, attacking shipping, railways and manufacturing objectives…”

Ordered to USS New Jersey in March 1946, he served as Engineer Officer of that battleship from April of that year to April 1947. He then had a tour of shore duty in California, serving first at the Terminal Island Naval Shipyard, San Pedro, and later at the Long Beach Naval Shipyard at Long Beach. In January 1950 he reported to the Officer of the Chief of Naval Operations, Navy Department, Washington, DC, and after a period of indoctrination was sent as a member (Bureau of Ships Representative) of the US Naval Mission to Chile, at Valparaiso, Chile.

Assigned in September 1953 to the New York Naval Shipyard, Brooklyn, New York, he remained there until July 1956 after which he served on the Staff of Commander Service Force, US Atlantic Fleet. During the period August 1959 to August 1961 he had duty at the Norfolk, (Virginia) Naval Shipyard and is now serving as Superior of Shipbuilding, US Navy, Westwego, Louisiana.