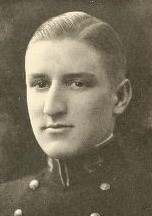 Captain Cole, born in Chester, Pennsylvania, January 10, 1903, attended South Philadelphia (Pennsylvania) High School before his appointment to the US Naval Academy, Annapolis, Maryland, from the First District of Pennsylvania in 1920. Graduated and commissioned Ensign in June 1924 he subsequently was promoted as follows: Lieutenant (junior grade), June 5, 1927; Lieutenant, June 30, 1932; Lieutenant Commander, July 1, 1938; Commander, July 17, 1942; and Captain, November 1943 to rank from June 1, 1943.

After graduation in 1924, Captain Cole served consecutively in the USS Colorado, the USS Shirk, and the USS Mullany, during the Second Nicaraguan Campaign. He had instruction in mechanical engineering at the Postgraduate School, Annapolis, Maryland, Columbia University, New York, New York, and at various naval activities from June 1929 until September 1931. Ordered to Destroyers, Asiatic Fleet, in November 1931 he was assigned duty in the USS John D Edwards operating on Yangtze Patrol and served in that destroyer until October 1934.

Returning to the United States, Captain Cole had duty at the Naval Boiler Laboratory, Navy Yard, Philadelphia, Pennsylvania, from December 1934 until Mau 1937. He then assisted in fitting out the USS Philadelphia at the Philadelphia Navy Yard, and was assigned duty as assistant engineer officer of that cruiser on her commissioning, September 23, 1937. From May 1939 until February 1941 he commanded the USS Barry. He then had duty at the Naval Research Laboratory, Anacostia Station, Washington, DC, until April, 1942. After fitting out the USS Fletcher he commanded that destroyer from her commissioning, June 30, 1942, until the following December. For his services in that command he was awarded the Navy Cross with the following citation:

“For extraordinary heroism in the line of his profession during action with enemy forces on the night of November 12-13, 1942, on which occasion the force to which he was attached engaged at close quarters and defeated a superior enemy force. His daring and determination contributed materially to the victory which prevented the enemy from accomplishing their purpose.”

In December 1942, Captain Cole reported for duty on the staff of the Commander, Destroyer, Pacific Area. In March 1944 he assumed command Destroyer Squadron 5, with additional duty as Commander, Destroyer Division 9. During that commanded he was awarded the Legion of Merit for services as set forth in the following citation, and the Bronze Star Medal (citation not available) for duty as Commander, Second Supply Group in the Lingayen Operations January 3 to January 13, 1945.

“For exceptionally meritorious conduct in the performance of outstanding services to the Government of the United States as Commander, Task Unit 78.3.10, in action against enemy Japanese forces in the Southwest Pacific Area on December 4-5 and while engaged in escort duty during the Ormoc Operations at Leyte on December 7, 1944. Vigilant and aggressive, Captain Cole conducted the activities of his task unit with dauntless courage and indomitable determination, skillfully maneuvering against persistent enemy air activity to execute an urgent supply mission under extremely hazardous conditions. Providing effective protection for other naval units in support of strategic landings on the west coast of Leyte, he exercised sound tactical judgement and expert seamanship during the critical period of operations, rendering valiant service in the face of strong opposition. By his cool decision, forceful leadership and outstanding professional ability throughout, Captain Cole contributed essentially to the seizure of Japanese bases vital to the support of further offensive operations against a ruthless enemy.”

In April 1945, Captain Cole reported for duty as Director of the Enlisted Performance Division, Bureau of Naval Personnel, Navy Department, Washington, DC. In February 1947 he was ordered detached from that assignment and to report doe duty as Commanding Officer of the USS Spokane, and he assumed command of that cruiser on April 12, 1947.