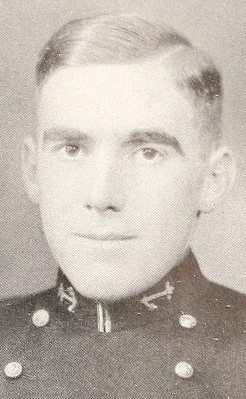 Commander Campbell was born April 22, 1909, at Danville, Washington. He was graduated from Colville High School, Colville, Washington, in a 1926, and was appointed to the US Naval Academy from Washington in 1929. At Annapolis he played basketball and baseball, winning the “N” in each. Graduated and commissioned Ensign on June 1, 1933, he subsequently progressed in grade to the rank of Commander, January 1, 1944.

On June 20, 1935 Commander Campbell reported at the Naval Air Station, Pensacola, Florida, for flight training, and was designated naval aviator on May 26, 1936. From August 3, 1936, until July 1, 1937, he was on duty with Scouting Squadron Forty-Two, based consecutively on the Langley and Saratoga, and during the following six months he served with Scouting Squadron Forty-two, based on the Ranger. He reported for duty in connection with fitting out the aviation unit of Boise on February 18, 1938, and served in that unit from its commissioning on August 12, 1938, until May 22, 1939. During the following three years he served with Patrol Squadron Twenty-four (designation changed to Patrol Squadron Twelve), based on Pearl Harbor, T.H. He continued aviation duty in the Pacific, assuring command of Patrol Squadron Eleven in March, 1943. He commanded that Squadron during the entire period of its service in the enemy Japanese-controlled area of the Bismarch Sea. For service during this period Commander Campbell was awarded the Navy Cross, and the Distinguished Flying Cross and the Ribbon for a facsimile of the Presidential Unit Citation awarded Patrol squadron Eleven.

“For distinguishing himself by extraordinary heroism in hazardous missions and in duties of great responsibility from 13 October 1943 to 22 November 1943. During this period, Lieutenant Commander Clifford M. Campbell, US Navy, a capable leader, by example and guidance obtained for his squadron an outstanding record and personally rendered services of great benefit to the war effort. His conduct and leadership in pioneering a dangerous form of night attack were in keeping with the highest traditions of the Navy of the United States.”

“For distinguishing yourself by heroism and extraordinary achievement in aerial flight. During the period 15 September to 20 October, 1943, as pilot of a Catalina patrol plane, you successfully completed five hazardous night missions. On the night of October 20, 1943, your mission was most dangerous, and was carried out under very difficult navigational and flying conditions. On this occasion you skillfully located, and in the face of enemy opposition and at the risk of your life above and beyond the call of duty, intrepidly overcame existing obstacles to reach your objective. Your actions showed a high degree of professional skill, courage, aggressiveness and determination and were in keeping with the highest traditions of the Navy of the United States.”

“For outstanding performance above the normal call of duty while engaged in Search Missions and Anti-Shipping attacks in the enemy Japanese-controlled Area of the Bismarch Sea from September 15, 1943, to February 1, 1944. Rendering pioneer services in changing the passive, defensive search into a bold and powerful offensive, Patrol Squadron Eleven has utilized the full potentialities of the PB4Y seaplane and its equipment, locating enemy task force units and striking dangerously by night in devastating masthead, glide-bombing attack to insure vital hits on the target. Dauntless and aggressive in the fulfillment of each assignment, the gallent pilots of Squadron Eleven conducted daring, lone patrols regardless of weather in a continuous coverage of this area, intercepting and attacking so effectively as to inflict substantial damage on hostile combat and other shipping, to deny the enemy the sea route between New Ireland and New Britain Islands and thus prevent the reinforcing of important Japanese bases. The splendid record of this combat group is a tribute to the courageous fighting spirit of its officers and men and reflects the highest credit upon the United States Naval Service.”

Commander Campbell relinquished command of Patrol Squadron Eleven on May 25, 1944. And the following month reported for duty on the Staff of the Commander, Aircraft, Seventh Fleet. For his services in this assignment he was awarded the Legion of Merit with the following citation:

“For exceptionally meritorious conduct in the performance of outstanding services to the Government of the United States while occupying positions of responsibility within United States Naval Aircraft, Southwest Pacific Force, and Aircraft, Seventh Fleet, during the period September 13, 1943, to September 14, 1944. Instrumental in planning and executing missions and successful night operations of Catalina Patrol Planes against enemy Japanese forces in the New Guinea-Bismarck Archipelago area, Commander Campbell, by his splendid leadership and devotion to duty, contributed essentially to the severe damage inflicted upon the enemy as a result of these operations, thereby furthering the cause of the United States.”

On October 23, 1944, Commander Campbell reported for duty as head of the Gunnery Training Section, Training Division office of the Chief of Naval Operations, after which he had duty from June 15, 1946 to May 1947 on the staff of Commander Task Force Sixty-Eight. His present assignment is Executive Officer of the USS Mindoro.