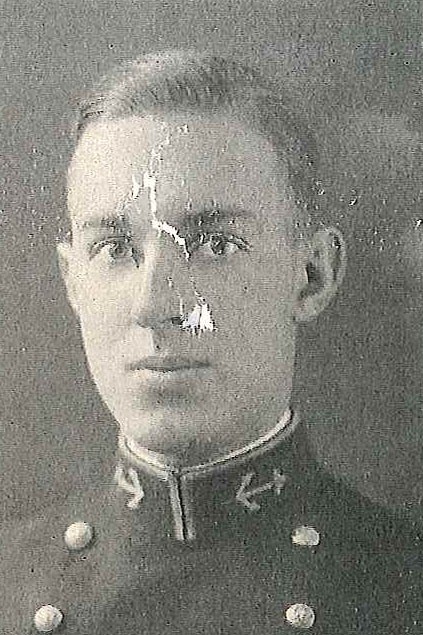 William Christian Asserson, Jr., was born aboard USS Wabash at the Navy Yard, Boston, Massachusetts, on May 19, 1903. He attended Sidewells Friends School in Washington, DC, prior to entering the US Naval Academy on appointment from the State of Indiana on July 18, 1922. Graduated and commissioned Ensign on June 3, 1926, he subsequently attained the rank of Captain, to date from March 20, 1945.

After graduation from the Naval Academy in June 1926, he had sea duty until October 1929, one year in USS Mississippi, a unit of Battleship Division 4, Battle Fleet, and two in USS Litchfield, Squadron Leader of Destroyer Squadron 12, Battle Fleet. In November 19129 he reported to the Naval Air Station, Pensacola, Florida, for flight training, and designated Naval Aviator in July 1930, he served for three years as pilot of Torpedo Squadron 2B, based on USS Saratoga.

In June 1933 he returned to the Naval Air Station, Pensacola, for a tour of duty in the Assembly and Repair Department. His next five years were spent aboard USS California. With Observation Squadron 4B; and at Coco Solo, Canal Zone, with Patrol Squadron 33.

In July 1940 he joined Patrol Squadron 56, and in that assignment in the Spring of 1941, he had temporary additional duty with Commander Destroyer Division 13 and Patrol Squadron 52 in connection with secret operations in high latitudes. For this he received commendatory letters from various sources, including the Commander in Chief, Atlantic Fleet. His squadron was redesignated Transition Training Squadron, Atlantic, in July 1941, and he continued duty therewith at Naval Air Station, Banana River, Florida, until February 1942, just after the United States entered World War I..

From October 1946 until April 1949 he had duty as Bureau of Aeronautics Representative at Reaction Motors Inc., Naval Ammunition Depot, Lake Denmark, Dover, New Jersey. In May 1949 he assumed command of USS Pine Island (AV-12), and a year later he was transferred to command of the Naval Air Station, Sangley Point, Luzon, Philippine Islands. In August 1951 he reported to the Naval Air Station, Alameda, California, for duty as Chief of Staff and Aide to the Commander Naval Air Bases, Twelfth Naval District.