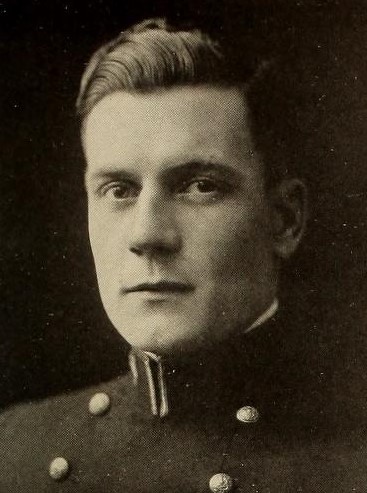 William Bowen Ault was born on October 6, 1898, In Enterprise, Oregon, son of Dr. Charles A. Ault and Mrs. (Tibitha Alexander Moore) Ault. He attended public schools in Enterprise and entered the U.S. Naval Academy, Annapolis, Maryland, on appointment from his native state in 1918. As a Midshipman he participated in varsity lacrosse and basketball (Captain of Team, 1922) and won his “N” in both sports. Graduated with the degree of Bachelor of Science and commissioned Ensign in the U.S. Navy on June 3, 1922, he subsequently advanced to the rank of Commander, to date from January 1, 1942.

After graduation from the Naval Academy in 1922, he was assigned to the battleship Arkansas until August 1924, interspersed with duty at the Naval Academy from October 1922 to February 1923. When detached from the Arkansas, he reported to the Naval Air Station, Pensacola, Florida, for flight training, and designated Naval Aviator in May 1925, he was assigned to Aircraft squadrons Scouting Fleet, based Hampton Roads, Virginia, for four months. He then joined the USS Cincinnati, for duty with the Aviation Unit attached to that cruiser.

In October 126 he returned to the Naval Academy as an instructor in the Department of Ordnance and Gunnery, and remained there eight months. After duty with Observation Squadron 3 of Aircraft Squadrons, Scouting Fleet, from June 1937 to July 1928, he again returned to the Naval Academy, where he served until October 1930. A month later he was assigned to Patrol Squadron 10-S, attached to the USS Wright, and in June 1931 he reported for duty on the Staff of Commander Aircraft, Scouting Force. He remained in that assignment for a year, then served for a year with Torpedo squadron 1-S, later 1_b, based on the USS Lexington.

Returning to shore duty in June 1933, he served until June 1935 at the Naval Air Station, Norfolk, Virginia, after which he was assigned to Observation squadron 3-B, until May 1936. He assigned in fitting out the USS Yorktown at the Newport News (Virginia) Shipbuilding and Dry Dock, and joined that aircraft carrier on her commissioning, September 30, 1937. He continued served on board the Yorktown until May 1938, then commanded Torpedo Squadron 6, based on the USS Enterprise, until July 1939.

In August 1939 he assumed command of the Naval Reserve Aviation Base at Kansas City, Missouri, where he remained until July 1941. Next assigned to the USS Lexington, he served as Commander of an Air Group attached to that carrier in the early period of World War II. He was awarded the Navy Cross, with citations as follows: “For extraordinary heroism as Air Group Commander of the USS Lexington in action against Japanese forces in the Coral Sea, may 7 and 8, 1942. Commander Ault led the air attacks in the face of severe anti-aircraft barrage and heavy fighter opposition, which damage to another May 8. His failure to return from the latter encounter and his courageous conduct throughout the duration of these actions an inspiration to the whole air group.”

Commander Ault was officially reported missing in action on May 8, 1942, when the plane in which he was flying failed to return from an engagement with the enemy in the Asiatic, Coral Sea Area. A year and a a day later he was declared dead, in compliance with Section 5 of Public Law 490.

In addition to the Navy Cross, Commander was posthumously awarded the Purple Heart Medal, and was entitled to the Victory Medal (World War I); the American Defense Service Medal, Fleet Clasp; the Asiatic-Pacific Campaign medal; and the World War II Victory Medal. He had been a member of the U.S Society of Naval Engineers and the U.S. Naval Institute Proceedings.