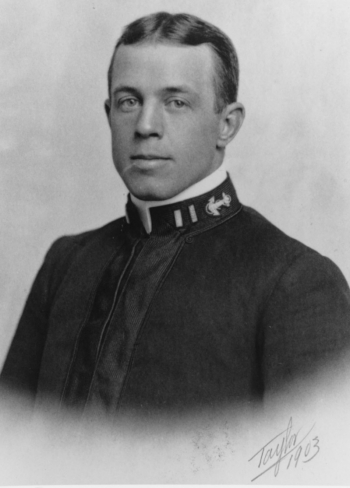 Harry Ervin Yarnell was born in Iowa, near Independence, on 18 October 1875. He attended country schools and the Independence High School, and was appointed to the US Naval Academy, Annapolis, Maryland, by the Honorable David B. Henderson, Representative to Congress from the Third Iowa District, in 1893. He was graduated with distinction, fourth in the Class of 1897, on 2 June 1897, served at sea for two years, then required by law, and was commissioned Ensign on 1 July 1899. He subsequently advanced in rank to that of Rear Admiral, to date from 17 August 1928. He served in the rank of Admiral as Commander in Chief, Asiatic Fleet, from October 1936 until July 1939, and was transferred to the Retired List of the US Navy on 1 November 1939. He was recalled to active duty during the period of emergency prior to the outbreak of World War II, serving from 1 November 1941 until 15 January 1943, and had further active duty from June 1943 until December 1944.

After graduation from the Naval Academy in 1897, he was ordered to USS Oregon, in which as a Naval Cadet he made the famous voyage of that battleship from the West Coast to Key West in March to May, 1898, and participated in the Battle of Santiago, when the Spanish Fleet was destroyed on 3 July 1898. He sailed to Asiatic Station in Oregon, and in March 1899 was detached at Cavite with orders to the Naval Academy, and after final examination was commissioned in the US Navy. He returned to Asiatic Station and served in the gunboat Yorktown during the Philippine Insurrection, and with the China Relief Expedition during the Boxer Rebellion. Before his return to the United States in 1902, he served for a year as Aide on the Staff of the Commander in Chief, Asiatic Fleet (Admiral George C. Remey, USN).

In June 1902 he joined the USS Biddle at Port Royal, and in September of the same year was transferred to the USS Stockton, which he commanded until June 1903. With the First Torpedo Boat Flotilla, on board USS Barry, he cruised to the Far East, and later commanded USS Dale until his return to the United States in June 1905. From July of that year to September 1906 he served at the Naval Proving Ground, Indianhead, Maryland, and joined USS Connecticut at her commissioning on 29 September 1906. In that battleship he made the round-the-world cruise when she operated as Flagship of Rear Admirals Robley D. Evans and Charles S. Sperry, successively Commander in Chief, Battle Fleet. He served as her Senior Engineer Officer from June 1908 until April 1909.

Ordered next to the Naval Torpedo Station, Newport, Rhode Island, he was detached in May 1911 to serve as Aide and Fleet Engineer Officer on the Staff of the Commander in Chief, Atlantic Fleet (Rear Admiral Hugo Osterhaus), attached to the flagships, USS Connecticut, USS Washington and USS Utah. Detached in January 1913, he had eighteen months’ duty as Navigator of the USS New Jersey. He attended the course at the Naval War College in 1914-1915, and for a year thereafter remained there for duty on the Staff. In July 1916 he assumed command of the USS Nashville, and was at Tampico, Mexico, in April 1917, at the outbreak of World War I.

In August 1917 Nashville was ordered to Gibralter for patrol duty in the Mediterranean, and in October of that year Admiral (then Commander) Yarnell was detached from command of Nashville and assigned duty as Base Commander Gibralter and in command of Untied States vessels in that port. In November 1917 he was given additional duty as Chief of Staff to Commander Squadron TWO, Patrol Force, Atlantic Fleet. In December, he reported for service as Aide to the Commander, US Naval Forces Operating in European Waters (Admiral William S. Sims, USN), and at Headquarters in London served in the Planning Section. In September 1918 he reported for duty in the Office of the Chief of Naval Operations, Navy Department, Washington, DC.

He was awarded the Navy Cross ‘For distinguished service in the line of his profession on the Staff of the Commander, US Naval Forces Operating in European Waters, and later in the Office of the Chief of Naval Operations.”

In July 1927 he reported to the Naval Air Station, Pensacola, Florida, for instruction, and was designated Aviation Observer before his detachment in September 1927 to fit out USS Saratoga at the Brown-Boveri Electric Corporation’s plant at Camden, New Jersey. While there he had additional duty in connection with the development of arresting gear and training aviation units for the Saratoga, and had further additional duty in connection with catapults at the Navy Yards, Washington, DC. He commissioned the Saratoga on 16 November 1927, and served as her Commanding Officer and Engineer in Chief of the US Navy, with the accompanying rank of Rear Admiral, for a term of four years from 17 August 1928. From January to April 1930 he had additional duty as a Naval Advisor to American Representatives at the London Naval Conference, London, England.

In June 1931 he became Commander Aircraft, Battle Force, with additional duty as Commander Aircraft, US Fleet, his flag in the carrier USS Saratoga. Two years later he reported as Commandant of the Fourteenth Naval District at Pearl Harbor, T. H., and in October 1936 he was designated Commander in Chief, Asiatic Fleet, with the rank of Admiral. On 28 August1939, he was awarded the Distinguished Service Medal, by Act of Congress, with citation as follows:

“As Commander in Chief of the Asiatic Fleet from October 30, 1936, to July 25, 1939, he has shown such exceptional ability, courage, tact and devotion to duty in protecting American interests and in handling with the greatest skill diplomacy the many delicate situations that arouse during the continued emergency in China, that he deserves the Nation’s highest praise. His conduct of affairs in the Far East not only has received commendation of our Nationals in China but the Nationals and Military of other nations have looked to him for mature and valued counsel and leadership during the hostilities in China.”

He was transferred to the Retired List of the US Navy in his permanent rank of Rear Admiral, and on 16 July 1942, was advanced to the rank of Admiral, in accordance with legislation approved on that date. He was recalled to active duty and served in the Office of the Secretary of the Navy as Special Advisor to the Chinese Military Mission from 1 November 1941, to 15 January 1943, when he was relieved of action duty. Again recalled in June 1943, he served for eighteen months in the Office of the Chief of Naval Operations, and as Head of a Special Section form August of that year until relieved of all active duty in December 1944.

Fleet Admiral Ernest J. King, USN, Chief of Naval Operations, during Admiral Yarnell’s service there, paid him the following tribute: “Admiral Harry E. Yarnell is again returning to inactive duty. Twice he has been recalled to give the Navy the benefit of his years of experienced service, and since June 1943 he has worked with devotion and distinction in the Office of the Chief of Naval Operations. His departure carries with it my personal regret at the loss his services and my thanks for a job well done.”

In addition to the Navy Cross and the Distinguished Service Medal, Admiral Yarnell had the Sampson Medal; Spanish Campaign Medal; Philippine Campaign Medal; China Relief Expedition Medal; and the World War II Victory Service Medal. His foreign decorations include the Diploma and Decoration of the Companion of the Order of the British Empire, and the Cloud Standard, Second Class, awarded by the Government of China.

Admiral Yarnell died at Newport, Rhode Island on 7 July 1959, and was survived by his wife Mrs. Emily C. Yarnell.

The USS Harry E. Yarnell (DLG-17), built at Bath Iron Works Corporation, Bath, Maine, was named to honor Admiral Yarnell. Sponsored by Mrs. Philip Yarnell, Admiral Yarnell’s daughter-in-law [the admiral's widow being in frail health], that guided missile frigate was launched on 9 December 1961, and was commissioned as a ship of the US Navy on 2 February 1963.