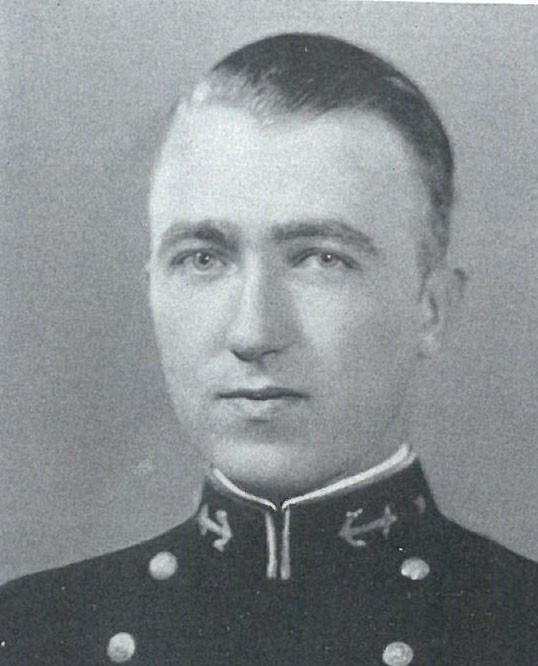 Joseph Patrick Canty was born in Springfield, Illinois, on September 11, 1906,  son of  the late Patrick Timothy and Sarah Jane (Ramsden) Canty.  He was graduated from Elgin (Illinois) High School, in 1924, and on August 12, that year enlisted in the US Navy. On August 11, 1925 he was honorably discharged to accept an appointment to the US Naval Academy, Annapolis, Maryland. As a Midshipman he was on the staff of the Plebe Year Book and was associate Editor of the "Lucky Bag."  Graduated and commissioned Ensign on June 6, 1929, he subsequently progressed in rank to that of Captain to date from July l, 1949, having served in that rank (temporary) from December 10, 1945 to January l, 1948. On April 1, 1955 he was transferred to the Retired List of the US Navy and was advanced to the rank of Rear Admiral on the basis of combat awards.

Following graduation from the Naval Academy in 1929, he joined  USS New Mexico as Assistant Navigator and Assistant Electrical Officer, and from June 1931 until May 1935 served successively in the Gunnery Department of the destroyers Breckinridge and Hatfield and the cruiser Omaha.  He next had Deck and Communication duty on board USS Relief, and in May 1936 assumed command of USS Eagle 19.  He was attached to USS Gold Star as Engineer Officer for two years, May 1938-May 1940 after which he was assigned as Electrical Officer on board USS Colorado. Detached from that battleship in September 1941, he reported as Executive Officer of the USS Dewey.

He was serving as Executive Officer of the USS Dewey during the Japanese attack on Pearl Harbor, Territory of Hawaii on December 7, 1941, and subsequently was escort for USS Lexington in the attacks on Rabaul, Salamaua, and Lae, and in the Battle of Coral Sea, during which she rescued the crew from the Lexington when he was abandoned due to fire.  He saw further action during the Battle of Midway, assault on Guadalcanal (escorting transports) and the Battle of the Eastern Solomons (escorting the USS Saratoga).  In November 1942 he assumed command of the Dewey, and for "exceptionally meritorious conduct...(in that command ) during the seizure and occupation of enemy Japanese-held Attu Island in May 1943..." he was awarded the Legion of Merit with Combat "V."  The citation continues:

"Skillfully maneuvering his ship through dense fog, (he) provided invaluable fire support for our landing craft approaching the beaches through uncharted and hazardous waters and, later, for our ground troops advancing in the race of hostile opposition. On May 23, when Japanese bombers attempted to raid our forces in the area, the destroyer furnished fighter director services, enabling our planes to drive off the enemy without damage to our ships or shore installations, and to inflict heavy losses on the attackers.  Commander Canty's superb seamanship and indomitable fighting spirit contributed in a large measure to the success of this perilous undertaking."

Under his command, the USS Dewey also participated as an escort for the Attack Force on the Gilbert Islands, saw action in the assault on Makin Island and subsequently joined the force at Tarawa prior to its withdrawal.

Detached from command of the Dewey in December 1943, he reported the next month as Commanding Officer of the Naval Training Schools, Fort Lauderdale, Florida.  Between July and October 1944 he was Connnanding Officer of Naval Beach Battalions in training at the Amphibious Base, Oceanside, California, after which he had duty on the staff of Commander Transport Squadron Eleven. In that assignment he served as Squadron Beachmaster and landed the 6th Army Division at Lingayen Gulf, Luzon, Philippine Islands, and also served as squadron Beachmaster during the landing of the Third Marine Division at Iwo Jima.

Returning to the United States in July 1945, he again reported as Commanding Officer of Naval Beach Battalions under training at Oceanside, California, and in November of that year joined the staff of Commander Amphibious Group TWO as Operations Officer. He was Chief Staff Officer to Commander New York Group, Atlantic Reserve Fleet, from November 1946 until November 1947, when he transferred to the staff of Commander Boston Group, Atlantic Reserve Fleet, to serve as Material Officer until March 1949.

Ordered to duty afloat, he commanded the USS Marias until June 1950, followed by an assignment as Director of Training, First Naval District, with headquarters in Boston, Massachusetts. He remained there until August 1952, and after instruction at the Naval War College, Newport, Rhode Island, assumed command in June 1953 of the USS Cascade. Detached from that command in September 1954, he then reported as Asssistant Chief of Staff for Operations to the Commanddant of the Sixth Naval District, with headquarters in Charleston, South Carolina.  He continued to serve in that capacity until relieved of all active duty pendtng his retirement, effective April 1, 1955.