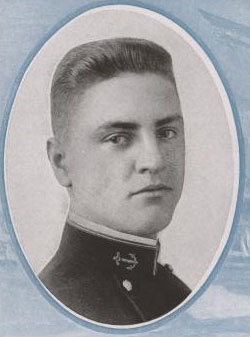 Captain Geiselman was born on 8 October 1895, at Hanover, Pennsylvania. He attended the Hanover (Pennsylvania) High School, before his appointment to the US Naval Academy, Annapolis, Maryland from his native state in 1914. Graduated and commissioned Ensign on 28 June 1917, with the Class of 1918, he advanced through the various grades to the rank of Captain to date from 1 January 1942.

Upon graduation from the Academy in 1917, Captain Geiselman was assigned to the USS Wheeling as a gun division officer with additional duties as Assistant Navigator. He had consecutive duty aboard the USS Stewart and the USS Isabel from February 1918 to April 1920, and was serving as Commanding Officer of the later upon her de-commissioning. From May 1920 until August of that year he was Gunnery Officer in the USS Whipple, after which he transferred in the same capacity to the USS John D. Edwards. In August 1921, he was assigned to the USS Villalobos, as Executive Officer and in September 1923 assumed command of the USS Bittern, engaged in the laying and recovery of mines for training as a unit of the US Asiatic Fleet operating in the Philippines and along the Coast of China.

Following his return to the United States, Captain Geiselman was assigned duty at Albany, New York, as Navy Recruiting Officer and remained there until September 1925, when he was assigned duty aboard the USS Mississippi, operating with the Pacific Fleet. From July 1928 until June 1929, he was under instruction at the Naval War College, Newport, Rhode Island, after which he was on duty as Communications Watch Officer at the Communications Center, Office of the Chief of Naval Operations, Navy Department, Washington, DC. In June 1930, he was assigned to the USS Hulbert as Executive Officer and Navigator, assuming command of that destroyer in June 1932. He reported as instructor in the Department of Economics at the US Naval Academy in July 1933, and while he was there, assisted in the formulation of the curricula of that Department, which was then being established for the first time.

Captain Geiselman joined the USS Wyoming as Gunnery Officer, serving aboard her from June 1935 until June 1937, when he reported to the United Shipbuilding and Dry Dock Corporation and United Shipyards, Inc., in connection with the fitting out of the USS Fanning, and assumed command upon her commissioning on 8 October 1937. Detached from the Fanning in July 1938, he had two months' temporary duty with the US Naval Examining Board, Navy Department, Washington, DC. Following duty under instruction at the US Army War College, Fort Humphreys, Washington, DC, he reported for duty in the Bureau of Ships, Navy Department, as Equipment Officer, serving in that Division until January 1941, when he was ordered to assume the duties of Executive Officer of the USS Arizona.

Following the sinking of the Arizona, when the Japanese struck at Pearl Harbor, TH, on 7 December 1941, Captain Geiselman reported the next day for duty as Senior Naval Representative on the Staff of the Military Governor of the Hawaiian Islands, when the Islands were placed under Military Government. He served in that duty until March 1942 when he was assigned liaison duty between the Commander in Chief, Pacific Fleet, the Commandant, Fourteenth Naval District and the Commanding General Hawaiian Department in connection with the establishment of a Joint Command Center on Oahu, TH.

In April 1942, Captain Geiselman assumed command of the USS Detroit, engaged in troop convoy movements to the South Pacific until October 1942 and was later assigned to duty with the North Pacific Force, operating in the Aleutians throughout the campaign in that area. He commanded the Detroit until October 1943, and for his services was awarded a Bronze Star Medal with the following citation:

BRONZE STAR MEDAL: (With Combat 'V') - 'For meritorious achievement as Commanding Officer of the USS Detroit, during action against enemy Japanese forces in the Pacific War Area from April 1942 to October 1943. Performing escort duty from the United States to various Mid-Pacific Islands, Captain Geiselman rendered invaluable service by his vigilance in protecting the ships in the convoy. Conducting patrols and numerous shore bombardments in the Northern Pacific Ocean Areas during the landings at Attu and Kiska and as a fire support ship at Amchitka. Maintaining his ship in a constant state of combat readiness, he contributed materially to our success in this area despite hazardous weather conditions and the difficult logistical problems. His professional skill, seamanship and devotion to duty were in keeping with the highest traditions of the United States Naval Service.'

Captain Geiselman had duty in the Logistics Plans Division of the Office of the Deputy Chief of Naval Operations, Navy Department, until 5 August 1947, when he was ordered to assume the duties of Chief of that Division. For services in connection with Logistic Planning in the Office of the Chief of Naval Operations, from 12 November 1943 to 2 September 1945, he received a Letter of Commendation with authorization to wear the Commendation Ribbon from the Secretary of the Navy.