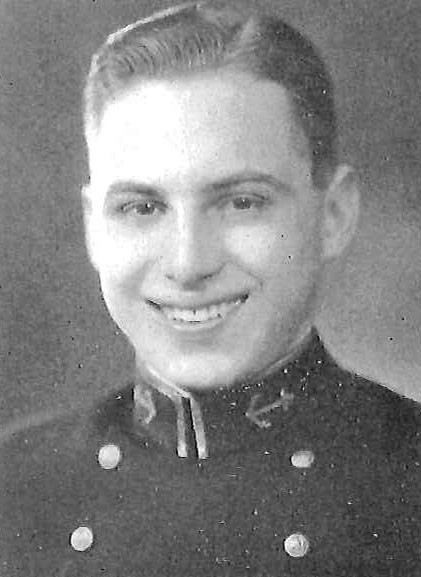 A native of Los Angeles, California, Porter Fryman Bedell graduated from the Naval Academy with the Class of 1933. He was commissioned in the US Naval Reserve, due to previous legislation, however a year later he received his appointment as Ensign in the US Navy. He then joined the battleship Pennsylvania and between 1938 and 1941 continued duty afloat in the destroyer Wasmuth and the cruiser Portland.

He was designated Naval Aviator in the summer of 1941 and was serving with Patrol Squadron 21, based on Pearl Harbor, when the Japanese attacked the Naval Base there on December 7, 1941. He transferred in April 1942 to Patrol Squadron 101 to serve as Executive Officer and Commanding Officer until December 1943. After a period of training, he reported in April 1944 as an Instructor in the Department of Navigation at the Naval Academy and while there also served as basketball coach. He was Aviation Member with the US Naval Mission to Chile for two years, followed by duty afloat in the aircraft carrier Antietam.

During the period 1949-1951 he served as Executive Officer of the Naval Air Station, Jacksonville, Florida. Completing the course in strategy and tactics at the Naval War College, he assumed command of Air Transport Squadron 3 in July 1952. He next had duty, 1954-1956, as Chief of the Training Division and Director of Personnel and Security at the Field Command, Armed Forces Special Weapons Project, Albuquerque, New Mexico.

He was Assistant Deputy Chief of Staff for Operations to the Commander in Chief, Allied Forces, Mediterranean from October 1956 until May 1958, when he was ordered to duty as Commanding Officer of  USS Yorktown. After a year at sea he reported to the Navy Department, Washington, DC, for duty in the Bureau of Naval Weapons. Under orders of March 8, 1961, he is now Commanding Officer of the Naval Air Station, Pensacola, Florida.

Gold Star in lieu of the Second Air Medal

Army Distinguished Flying Cross: “For heroism in flight and exceptional and outstanding accomplishment in the face of great danger above and beyond the line of duty. These operations consisted of over two hundred hours of operational flight missions, during which enemy fire was probable and expected.”

Air Medal: “For meritorious achievement…in aerial flight against enemy Japanese forces in the Pacific War Area from August 7 to September 10, 1943. Taking part in numerous night patrols and vigorous bombing raids on Japanese shipping and shore installations, (he) handled his plane expertly in site of antiaircraft fire and inflicted damage on an enemy submarine and a cargo ship, several barged and ammunition dumps ashore…”

Gold Star in lieu of Second Air Medal: “For meritorious achievement…as a First Pilot with Patrol Squadron 21 and as Patrol Plane Commander and First Pilot of a Bomber Plane in Patrol Squadron 101 in action against enemy Japanese forces in the Southwest Pacific War Area from December 7, 1941 to July 4, 1943. Completing his fifth mission during this period, (he) contributed materially to the success of his squadron and to the infliction of damage on the enemy…”