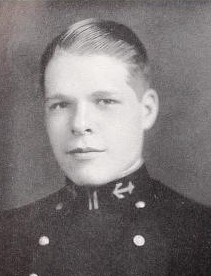 Francis Edward Fleck, Jr., was born in Rosemont, Pennsylvania, on September 27, 1912, son of Francis E. and Marian Bell Fleck. He attended Radnor High School in Wayne, Pennsylvania and Devitt Preparatory School in Washington, DC, prior to his appointment to the US Naval Academy in 1930. He was graduated and commissioned Ensign on May 31, 1934, and subsequently advanced to rank of Captain, to date from July 1, 1953.

Assigned first to the USS Memphis (CL-13), he served as Anti-Aircraft Division Officer of that cruiser from June 1934 until December 1938. In January 1939 he joined the USS Henley (DD-391) and was serving as Gunnery and torpedo Officer of that destroyer when the Japanese attacked the Fleet at Pearl Harbor on December 7, 1941. He received a Letter of Commendation, with Ribbon for “distinguished service” during that attack when he assumed command of that Henley, getting her underway prompt and fighting the ship in a most efficient manner. From May 1942 until February 1944 he served in the Executive Department of the Navy Academy, then returned to sea as Commanding Officer of the USS Champlin (DD-601), which had Atlantic Convoy duty, and participated in bombardments of Formia-Anzio area on the West Coast of Italy and the Invasion of Southern France. He was awarded the Bronze Star Medal with Combat “V,” and the Silver Star Medal, with citations to follow:

Bronze Star Medal: “For meritorious achievement as Commanding Officer of the USS Champlin during advanced operations in support of the Allied Armies in Italy from May 15 to August 5, 1944. Commencing with the Army’s breakthrough at the Anzio beachhead and continuing with the coastal advance northward, Commander Fleck operated his ship in support of the ground movement, carrying out effective shore bombardments of enemy installations and concentrations, operating against hostile submarine and E-boat attacks on vital maintenance shipping and supporting advance minesweeping formations in clearing heavily mined approaches to ports occupied by our forces despite opposing aerial attacks on the restricted and dangerous waters in which his ship was called upon to operate.

Silver Star Medal:  “For meritorious gallantry and intrepidity in action as Commanding Officer of the USS Champlin during amphibious invasion of Southern France between August 18 and August 30, 1944. By skillfully maneuvering ships and accurately directing its gunfire, (he) contributed to the effective support of the advancing ground forces in clearing the enemy forces from coastal positions on the right flank of the central assault area. Braving strong return fire, he conducted the shore bombardment with competence and vigor, silenced several enemy shore batteries, saturated enemy troops and tank concentrations and harassed the interior supply lines. His able participated in this action materially assisted in the expulsion of the enemy from Southern France…”

Detached from the Champlin in June 1945, he commanded the USS Stickell (DD-888) from July of that year until June 1947, then he served as Commander Escort Division 2 until October 1947, and as Commanding Officer of the USS Dyess (DD-880) for eight months thereafter. In July 1948 he reported as Executive Officer of the Naval Reserve Officers Training Corps Unit, Princeton University, remaining there until November 1951. From December of that year until April 1954 he served on the Staff of Commander Naval Forces, Far East (Naval Advanced Group), then for three months was Deputy Chief, Naval Section Military Assistance Advisory Group, Japan, at Tokyo.

In September 1954 he assumed command of the USS Salamonie (AO-26), and after fifteen months in that command reported to the Navy Department, Washington, DC, for duty as Operational Evaluator and Operational Development Force Liaison Officer, in the Office of the Chief of Naval Operations.