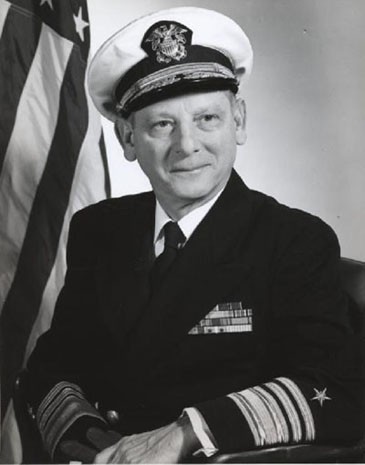 Horacio Rivero was born in Ponce, Puerto Rico, on 16 May 1910, son of Margarita De Lucca Vda De Rivero and Horacio Rivero. He was graduated from Central High School in San Juan, before entering the US Naval Academy, Annapolis, Maryland, on appointment from Puerto Rico on 20 June 1927. He was graduated with distinction, third in a Class of 441 members, and was commissioned Ensign on 4 June 1931. Promoted to the rank of Lieutenant on 4 June 1938, he subsequently advanced to the rank of Captain, to date from 1 July 1949, having served in that rank (temporary) from 7 February 1946 until 10 June 1947. He was promoted to Rear Admiral, to date 1 July 1956; Vice Admiral, to date from 1 October 1962 and Admiral, his date of rank 31 July 1964.

Following graduation from the Naval Academy in June 1931, Admiral Rivero was assigned to the USS Northampton, and served as a junior officer in the gunnery department of that heavy cruiser until transferred on 3 November 1932, to the USS Chicago. In the latter, he served as Communications Watch Officer on the Staff of Commander Cruisers, Scouting Force, of which the Chicago was flagship. From May 1933 to June 1934, he had duty on the Staff of Admiral J.N. Reeves, then Commander Battle Force, US Fleet, and served as Assistant Battle Force Communications Officer in the flagships New Mexico and California. He became Assistant Fleet Communications Officer, attached to the flagship Pennsylvania, when Admiral Reeves was designated Commander in Chief, US Fleet, and served in that capacity until June 1936. 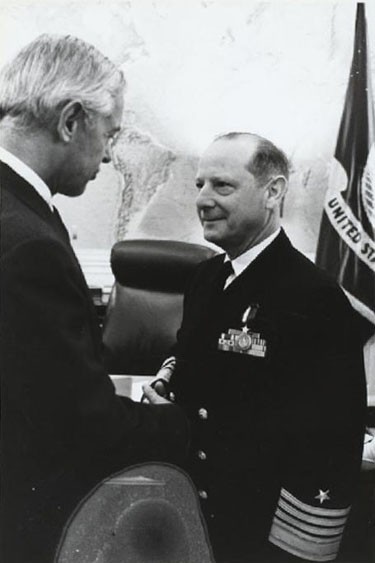 He assisted in fitting out the USS Porter (DE-356), and served as First Lieutenant and Assistant Gunnery Officer from her commissioning in August 1936 until June 1938. After his return to the United States, he received instruction at the Naval Postgraduate School, Annapolis, Maryland, continuing the course in Ordnance Engineering at the Massachusetts Institute of Technology, Cambridge, from which he received the degree of Master of Science in Electrical Engineering in June 1940. Admiral Rivero then had brief duty at the Naval Gun Factory, Washington, DC, the Naval Proving Ground, Dahlgren, Virginia, and a tour of duty in the Bureau of Ordnance, Navy Department, where he had the first Fire Control Radar desk in that Bureau, as well as the Bureau of Ships. He was commended by the Chief, Bureau of Ordnance, during this assignment.

In January 1942, shortly after the United States entered World War II, Admiral Rivero was ordered to duty in connection with fitting out the USS San Juan (CL-54), named for the Puerto Rican city. Upon her commissioning on 28 February 1942, he went aboard as her Assistant Gunnery Officer. As such, he participated in the landings at Guadalcanal-Tulagi, a lone raid on the Gilbert Islands, and the Battle of Santa Cruz Islands, from August to October 1942. He was awarded the Bronze Star Medal with Combat "V," for "meritorious service ... as Assistant Gunnery Officer of the USS San Juan in the Pacific War Area from 7 August 1942 to 24 April 1943..." The citation continues in part: 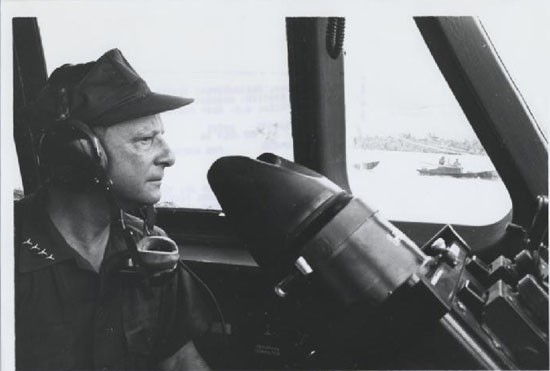 "During this period Captain (then Lieutenant Commander) Rivero ably controlled the after batteries of the USS San Juan during the effective supporting fire in the landing of our Marines at Guadalcanal on August 7, 1942. On the following day, when attacked by a large number of enemy shore based torpedo planes, the batteries under his control shot down several of the attacking aircraft and inflicted hits on many others, contributing to their subsequent loss. While conducting a lone raid on the Gilbert Islands in October 1942, his batteries efficiently contributed to the sinking of two Japanese patrol vessels and the capture of sixteen prisoners. On October 26, 1942, in the Battle of Santa Cruz, he superbly controlled the after batteries with devastating effect downing many enemy carrier based aircraft..."

Continuing duty as Gunnery Officer of the San Juan during 1943 and 1944, he participated in the South and Central Pacific campaigns, was a part of a covering force under command of Admiral William F. Halsey, USN; Bougainville in the Solomons; the capture of the Gilbert Islands in November 1943; and during the series of carrier raids on Rabaul late that year, and the attacks on Kwajalein in the Marshalls in February 1944.

He then returned to the United States to assist in fitting out the USS Pittsburgh (CA-72), and from her commissioning, 10 October 1944, to the end of the war period, served first as Gunnery Officer and later Executive Officer. In the Pittsburgh, operating with the FIFTH and THIRD Fleets, Admiral Rivero participated in the Iwo Jima and Okinawa campaigns and the first carrier raids on Tokyo. In March 1945 she made scheduled strikes against the enemy, and when the USS Franklin was hit by a bomb from a Japanese plane on 19 March, the Pittsburgh took her in tow, removed her to safety until, hours later, she could withdraw on her own steam.

On 5 June 1945, during operations against the enemy in the vicinity of Nansei Shoto, a severe typhoon struck ships of the THIRD Fleet, damaging a number of them. The Pittsburgh, the most damaged of all, lost her bow in the storm. The precautionary measure of seting complete closure in Damage Control was instrumental in preventing casualty. She proceeded to port on her own steam, a new bow was fabricated and installed so that she could make the trip to the United States for permanent repairs; and her weather-beaten bow was later recovered afloat and towed into Guam for salvage. Admiral Rivero was awarded the Legion of Merit and cited in part as follows:

"...He was particularly outstanding in his intelligent and timely direction of the heads of Departments of the ship, and his immediate inspections of damaged and flooded portions of the ship under extremely hazardous conditions and at the risk of his own life resulted in correct decisions being made, damage boundaries being correctly established and the efforts of the entire ship's personnel being correctly directed to the end that no lives were lost and it was possible to bring the ship safely to port."

Detached from the Pittsburgh in August 1945, he reported to the Special Weapons Division of the Office of the Chief of Naval Operations, to serve as Assistant to the Assistant Chief of Naval Operations (Special Weapons). Admiral Rivero subsequently served (in the rank of Captain) from 7 February 1946 to 10 June 1947, on the Staff of Commander Joint Task Force ONE, for "Operation Crossroads." He was awarded the Navy Commendation Medal "For outstanding performance of duty as the Technical Assistant to the Deputy Task Force Commander, Joint Task Force ONE, for technical direction, during Operation Crossroads, from February 7 to October 31, 1946..." The citation continues in part:

"(He) participated (from its inception) in the organization of both the military and the technical Staff of Joint Task Force ONE. In addition he was instrumental in selecting and indoctrinating the personnel of the technical staff in the many and varied fields involved in such an operation...(and) contributing immeasurably to the successful completion of Operation Crossroads..."

He also participated on the Staff of Commander, Joint Task Force SEVEN, during atomic weapons tests in Eniwetok in 1948.

Reporting in July 1948 to the USS William C. Lawe (DD-763), he commanded that destroyer until March 1949, then was assigned duty as one of the original members of the Weapons Systems Evaluation Group, Office of the Secretary of Defense. He served in that capacity until August 1951, and for ten months thereafter commanded the USS Noble (APA-218). Completing the course at the National War College in June 1953, he next had duty as Fleet Operations Officer on the staff of the Commander in Chief, Pacific Fleet. On 15 October 1954, Admiral Rivero was designated Assistant Chief of Staff for Operations.

On 1 October 1963 he reported as Director of Navy Program Planning, Office of the Chief of Naval Operations, Navy Department and for his outstanding service in that assignment was awarded the Distinguished Service Medal. The citation follows in part: "For exceptionally meritorious service...during the period October 1963 to July 1964...Displaying outstanding leadership, superb organizational ability, and a keen understanding of management problems inherent in developing plans to reorganize the Navy Program Planning System, (he), through his skilled direction, was instrumental in developing a most effective integrated planning system, which provided a coordinated study effort in the Office of the Chief of Naval Operations that was highly responsive to Department of Defense requirements ..."

He became Vice Chief of Naval Operations on 31 July 1964 and "for exceptionally meritorious service..." in that capacity was awarded a Gold Star in lieu of the Second Distinguished Service Medal. The citation continues in part: "...Admiral Rivero rendered astute and timely recommendations which were invaluable in the formulation and implementation of naval strategy...(and), with highly respected technical competence and professional acumen, he established and maintained an effective rapport with the organizations within the Department of Defense and with the industrial and scientific communities in the conduct of naval affairs..."

In February 1968 he reported as Commander in Chief of the Allied Forces, Southern Europe. He was awarded a Gold Star in lieu of the Third Distinguished Service Medal and cited in part as follows: "...In the face of limited material resources, regional political upheavals, and the dramatically increased Soviet penetration of the Mediterranean, he persuasively rallied the common determination of Southern Region nations; developed plans to counter the Soviet threat; implemented the 'Flexible Response' strategy of the North Atlantic Treaty Organization (NATO) and intensively exercised the allied armies, navies and air forces in a variety of complex national and multinational maneuvers and exercises..."

Admiral Rivero was transferred to the Retired List of the US Navy on 1 June 1972.

Admiral Rivero passed away in 2000. 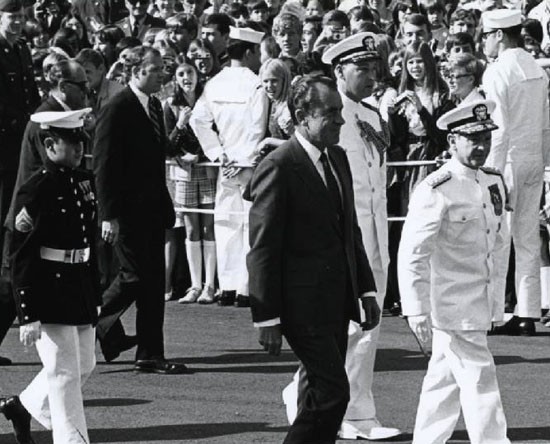