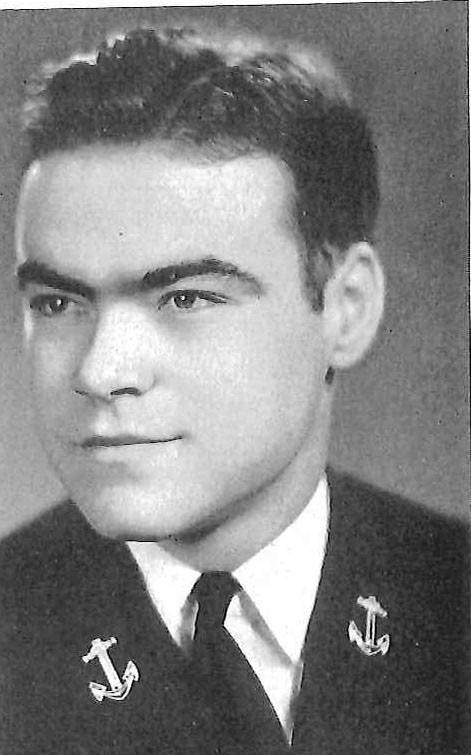 Pierre Numa Charbonnet, Jr. was born in San Francisco on December 22, 1919, the son of Dr. Pierre N. Charbonnet of New Orleans, and Blanche Rogers Charbonnet of Tulsa, Oklahoma (both deceased). He attended Cascia Hall, Tulsa, and the Hotchkiss School, Lakeville, Conn., prior to entering the US Naval Academy on appointment from the State of Oklahoma in 1937. He was commissioned ensign on February 7, 1941, and subsequently advanced in rank, attaining the grade of Vice Admiral on August 23, 1974.

He was serving in the heavy cruiser USS Augusta when the United States entered World War II, and upon transfer to the Pacific Theater, served in the cruiser USS New Orleans, participating in sea actions in support of the Guadalcanal Campaign.

After completing flight training in Pensacola, he was designated a Naval Aviator on March 4, 1944, and proceeded to Naval Air Station Melbourne, Fla. For operational training in fighter aircraft.

Admiral Charbonnet joined Fighter Squadron 24 in July 1944 and assumed command of that squadron and Air Group 24 in April 1945 on USS Santee when the Air Group Commander was lost in combat. Under his command, Carrier Air Group 24 received the Presidential Unit Citation, and he was awarded the Distinguished Flying Cross with Gold Star in lieu of a second, and the Air Medal with six Gold Stars.

Returning to the United States, he was assigned to Fleet Air West Coast until November 1945; he then served with Fighter Bomber Squadron 17 as Executive Officer. In May 1946, he assumed command of Fighter Bomber Squadron 82, later redesignated Fighter Squadron 172, operating from USS Randolph with the Sixth Fleet. From March 1948 to January 1951, he was attached to Naval Air Station, Pensacola, as Personnel Officer, Administrative Officer and Officer-in-Charge of the Flight Instructors School. In March 1951, he joined Air Development Squadron Three, where he served as Executive Officer and Project Pilot for development of fighter and attack tactics or carrier until February 1953.

The veteran aviator was ordered to the Naval Air Test Center, Patuxent River, Md., completed test pilot training in 1953, and served in the Tactical and Flight Test Divisions, where he directed tactical and engineering flight training for carrier aircraft. In May 1955, he assumed command of Attack Carrier Air Group Eight in USS Intrepid and deployed with the Sixth Fleet in the Mediterranean Sea.

In 1957, he served as Air Group Training Officer on the staff of Commander Naval Air Force, US Atlantic Fleet, and in 1958 reported as Executive Officer in USS Forrestal. In July 1959, he entered the National War College, Washington, DC, and then assumed duties as Head, Aviation Requirements Planning, Office if the Deputy Chief of Naval Operations for Air.

From September 1962 to August 1963, Admiral Charbonnet commanded the fleet oilers USS Marias and USS Pawcatuck. Under his command the former was the former was the recipient of the Battle Efficiency Award for the Atlantic Fleet. Following participation in the Advanced Management Program at Harvard University, he reported in February 1964 as Commanding Officer, USS Coral Sea, operating with the Pacific Fleet.

Departing Coral Sea in February 1965, he reported as Chief of Staff and Aide to Commander Carrier Division Seven and Commander Attack Carrier Striking Force, Seventh Fleet, on deployment to Vietnam in USS Midway for combat operations from March through October 1965. For performance of duties, he was awarded the Legion of Merit for “exceptionally meritorious conduct” while engaged in coordination of all carrier combat air operations in North and South Vietnam.

Admiral Charbonnet assumed duties as Commandant Eight Naval District in New Orleans on November 30, 1965, his first assignment as a flag officer and for which he was awarded his second Legion of Merit in May 1968.

In September 1969, he reported to the Chief of Naval Operations and was assigned duties as Director, Fleet Operations Division and Director Naval Reconnaissance Center. For meritorious performance of duty, he was awarded his third Legion of Merit in March 1971.