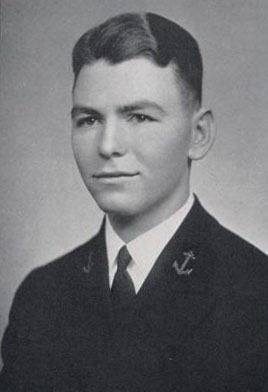 William Edward Gaillard was born in Savannah, Georgia, on 3 June 1912, son of George S. and Helen (Wilson) Gaillard. He attended Savannah High School, prior to entering the US Naval Academy, Annapolis, Maryland, on appointment from the State of New York in 1931. Graduated and commissioned Ensign on 6 June 1935, he subsequently advanced in rank, attaining that of Captain, to date from 1 July 1955.

Following graduation from the Naval Academy, he joined the USS Mississippi, for duty in connection with gunnery, communications and engineering. Detached from that battleship in June 1937, he was ordered to the Naval Air Station, Pensacola, Florida, for flight training. Designated Naval Aviator on 13 May 1938, he was next assigned to Scouting Squadron FORTY-TWO, based on the USS Ranger. In January 1940 he was transferred to the USS Wasp to serve as V-2 Division Officer and Catapult Officer until June 1941.

Returning to duty ashore he was a Flight Instructor at the Naval Air Station, Pensacola, where he continued duty following the United States' entry into World War II, 8 December 1941, and until August 1942. He next had four months duty as Assistant Operations Officer, Joint Operations Center, Naval Operating Base, Guantanamo Bay, Cuba, assuming command of the Naval Air Station, British Guiana in December 1942. In September 1943 he reported as Assistant Air Officer (later served as Air Officer) on board the USS Hornet.

"For meritorious achievement as Assistant Air Officer of the USS Hornet, during operations against enemy Japanese forces in the Western and Pacific War Areas from March 29, 1944 to April 22, 1945..." he was awarded the Bronze Star Medal with Combat "V."

The citation continues in part: "...Commander Gaillard was in large measure responsible for the efficiency of air operations on his vessel and contributed greatly to the success of the Hornet's air groups in inflicting extensive damage on the enemy throughout this period..." He is also entitled to the Ribbon for, and a facsimile of the Presidential Unit Citation awarded the USS Hornet.

Detached from the Hornet in September 1945, he then reported as Administrative Aide to the Commander Naval Air Training Base, Pensacola, Florida. In August 1948 he joined Transport Squadron FORTY-FOUR as Executive Officer and continued to serve with that squadron until January 1950. He attended a course at the Armed Forces Staff College, Norfolk, Virginia, before he was assigned, in July 1950, as Assistant for Shore Establishment Development Planning, Long Range Planning Branch, Office of the Chief of Naval Operations, Navy Department, Washington, DC.

In July 1952 he reported as Executive Officer of the Naval Air Station, Barber's Point, Oahu, Territory of Hawaii, where he remained until June 1954. He next had instruction at the Industrial College of the Armed Forces, Washington, DC, and in June 1955 assumed command of Fleet Aircraft Service Squadron ONE HUNDRED TWO. During the period February 1956 to September 1958 he was in command of Tactical Air Control Group TWO, after which he served as a member of the faculty at the Armed Forces Staff College, Norfolk, Virginia. In June 1960 he was ordered to duty as Chief of Staff and Aide to Commander Naval Forces, Marianas. He retired in June 1964.

He was married to the former Dorothy Fulgham of Pensacola, Florida, and they had two children. Captain Gaillard was a member of the Huguenot Society of South Carolina and the Sons of the American Revolution (Georgia Chapter).

Captain Gaillard died at the US Naval Hospital in Portsmouth, Virginia, on 12 August 1968.