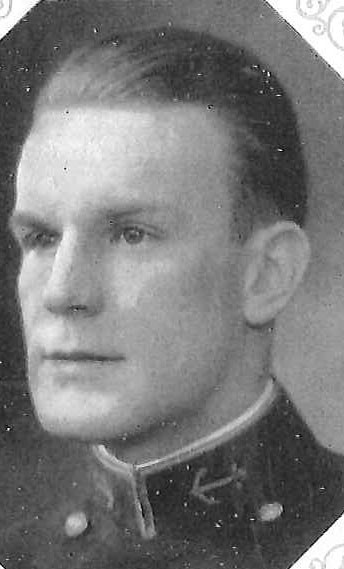 John Fordyce Castree was born in Philadelphia, Pennsylvania on November 12, 1907, son of the late Fordyce S. and Emma L. (Patterson) Castree. He graduated from West Philadelphia High School and after a year’s service in the US Navy, in an enlisted capacity, was appointed in 1927 at large to the US Naval Academy, Annapolis, Maryland. As a Midshipman he participated in athletics, including football and lacrosse. Graduated and commissioned Ensign June 4, 1931, he subsequently advanced in rank attaining that of Captain to date from July 1, 1950.

After graduation from the Naval Academy in June 1931, he was assisted to the Gunnery Department of  USS Maryland, and in July 1932 reported on board USS Alden. He continued duty afloat from March to July 1934 in USS Trenton, after which he had instruction at the Finance and Supply School, Philadelphia, Pennsylvania. (On September 15, 1935 he was transferred to the Supply Corps). He joined USS Dobbon as Assistant Supply Officer in July 1935, and in March 1936 became Disbursing Officer of USS Argonne, flagship of the Commander Base Force and Train, Base Force, based at San Pedro, California.

Between July 1937 and May 1939 he was Assistant Supply Officer at the Naval Aircraft Factory, Philadelphia, Pennsylvania, followed by duty as Treasure and Disbursing Officer, until June 1939. He was then assigned at the Naval Station, Guam. In December 1941 he reported as Assistant Supply Officer at the Navy Yard, Boston, Massachusetts, after which he was assisted, November 1942 to December 1943, to the Planning Division, Bureau of Supplies and Accounts, Navy Department, Washington, DC. Ordered to the Navy Yard, Philadelphia, Pennsylvania, he assisted in the fitting out of USS Wisconsin, and joined that battleship as Supply Officer upon her commissioning, on April 16, 1944. After training and trails on the East Coast War Zone. Passing through the Panama Canal she dropped anchor on October 2 at Ulithi, Caroline Islands. She won four engagement stars for operations with the Third and Fifth Fleets alternately, including operations for the reoccupation of the Philippines at Leyte and Luzon, Iwo Jima, Okinawa Gunto, and the China Coast.

In July 1945 he reported as Assistant Supply Officer of the Naval Shipyard, Philadelphia, Pennsylvania, where he remained until June 1946. The next year he attended the Naval War College, Newport, Rhode Island, and in June 1947 returned to Philadelphia for duty as Supply Officer of the Naval Aviation Supply Depot. In July 1949 he joined the staff of Commander Second Fleet, as Logistics Officer, and between January and August 1951 served as Chief of Staff for Logistics to the Commander in Chief, US Naval Forces, Eastern Atlantic and Mediterranean.

Following duty as Chief of Supply Branch Logistics in the staff of the Commander in Chief, Southern Europe, he was assigned to the Joint Staff Office, Joint Chiefs of Staff, Washington, DC. He was Executive Officer of the Naval Supply Center, Norfolk, Virginia, from October 1954 until August 1955, when he was ordered to report as assistant Chief of the Bureau of Supplies and Accounts for Accounts and Disbursing.