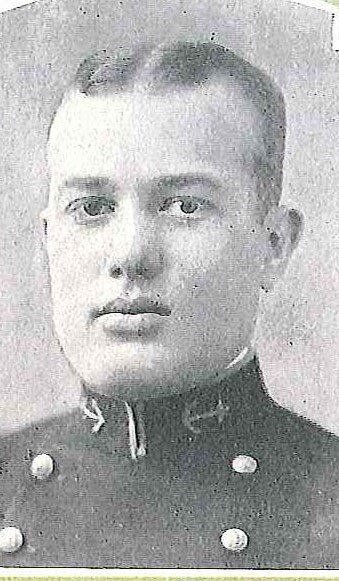 Gordon Stafford Everett was born on October 29, 1903 in Stewartsville, Missouri, the son of George A. Everett and Mrs. (Cora Hoggatt) Everett. He attended Lamar (Missouri) public schools and William Jewell College at Liberty, Missouri, before his appointment to the US Naval Academy, Annapolis, Maryland, from Colorado, in 1923. Graduated and commissioned Ensign on June 2, 1927, he attained the grade of Captain to date from March 20, 1945. On January 1, 1950, he was transferred to the Retried List of the US Navy, and advanced to the grade of Rear Admiral on the basis of a combat citation.

Following graduation from the Academy in1927, he had an extended period of sea service until June 1934. During this time he served consecutively in the cruiser Omaha – September 1927 to August 1928; the oiler Cuyama- August 1938 to June 1929; the destroyers Farragut-June 1929 to April 1930; the Evans-April to November 1930; the Rathburne November 1930 to June 1932, and finally the battleship Maryland. Detached from the latter in June in 1934, he returned to Annapolis, Maryland for postgraduate instruction in communications and applied communications. Completing the course in May 1936, he joined USS Trenton, serving in her until transferred in October 1937 to USS Gold Star.

In November 1939 he reported to the Naval Ammunition Depot, Hawthorne, Nevada, and remained there until February 1941, when he was assigned to USS Sterett as Executive Officer. Following a period of hospitalization, October 1941 to April 1942, he had fitting out duty in USS Alabama at the Navy Yard, Norfolk, Virginia. Upon her commissioning on August 16, 1942, he joined her as Navigator and later, in January 1945, he became her Executive Officer.

“For heroic service….” Aboard the Alabama, from August 26, 1943, to August 15, 1945, he was awarded the Bronze Star Medal with Combat Distinguishing Device “V”. The citation states in part as follows: “…. Frequently navigating his ship under conditions of visibility and high winds, (he) successfully negotiated unfamiliar, poorly charted and poorly marked harbors and waters in enemy territory, enabling the Alabama to conduct four successful bombardments of enemy-held territory and numerous others missions without casualty…”

He served as Legal Adviser of the Chief of Naval Communications, between December 1945 and September 1948, after which he joined USS Kaskaskia. The following month he assumed command of that oiler, commanding her until his return to the United States in August 1949. He had duty in the Office of the Chief of Naval Operations navy Department, for three months, reporting in October 1949, for duty with Military Sea Transportation Service, Navy Department, his last assignment before he retired on January 1, 1950.

He is a member of Sigma Nu national fraternity.