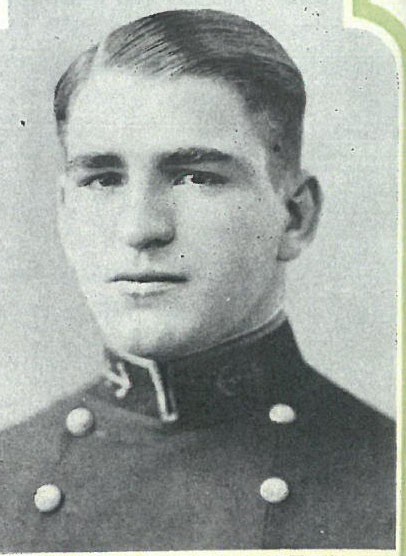 Henry Howard Caldwell was born in Rocklin, California, on October 3, 1905, son of the late Elmer A. and Rachel H, (Layton) Caldwell. He attended Roseville High School in California, Sparks High School in Nevada, and the University of Nevada at Reno, for one year, prior to his appointment to the US Naval Academy, Annapolis, Maryland, from the State of Nevada in 1923. As a Midshipman he played football and baseball, was Class Vice President (1926-1927), and was Battalion Commander. Graduated and commissioned Ensign on June 2, 1927, he subsequently advanced in rank, attaining that of Rear Admiral, to date from October 1, 1954.

Following graduation from the Naval Academy in 1927, he reported aboard USS Mississippi, and in March 1930 was detached with orders to the Naval Air Station, Pensacola, Florida, for flight training. Designated Naval Aviator on December 8, 1930, he was assigned the following month to the aviation unit of USS Idaho. In July 1931 he transferred to the aviation unit of USS New York. He was an Instructor in the Department of Seamanship and Navigation at the Naval Academy, between July 1934 and June 1937, when he joined Scouting Squadron THREE aboard USS Saratoga and later USS Lexington.

From July 1940 until February 1942 he served in the Division of Fleet Training, Office of the Chief of Naval Operations, Navy Department, Washington, DC, after which he had an eight months' assignment in the Readiness Division, Headquarters, Commander in Chief, United States Fleet, Navy Department. During October and November 1942 he had duty in connection with fitting out Carrier Air Replacement Group TWELVE at Alameda, California, and became Commanding Officer of that Air Group when it was commissioned, November 2, 1942. For outstanding services as Commander carrier Air Group TWELVE, attached to USS Saratoga, he was awarded the Distinguished Flying Cross and the Navy Cross. The citations follow in part:

Distinguished Flying Cross: "For heroism and extraordinary achievement...during operations against enemy Japanese forces in the Solomon Islands and Central pacific Areas from September 24 to November 19, 1943, participating in numerous missions over Japanese territory, (he) led his group in damaging bombing and strafing attacks against enemy airfields and other installations on Kolombangara, Bougainville and Nauru Islands. During a strike against enemy shipping in the harbor of Rabaul, New Britain, he braved intense antiaircraft fire to obtain valuable photographs and direct the action of his group before making a low-altitude bombing run against a hostile vessel. By his airmanship and devotion to duty he contributed materially to the success of our forces in neutralizing enemy airfields..."

Navy Cross: "For extraordinary heroism as commander of Air Group TWELVE and Pilot of a Torpedo Bomber...in action against enemy Japanese forces in the strongly fortified harbor at Rabaul, New Britain on November 5, 1943. Skillfully planning the details for a coordinated attack, (he) boldly led two air groups in a vigorous strike against vital enemy shipping and, maneuvering his torpedo bomber for maximum combat efficiency, assisted in blasting an enemy aircraft from the sky and in probably destroying three others. With one member of his crew dead, another seriously injured and his plane seriously damaged by intense and accurate hostile fire, he steadfastly remained at the controls and, with expert airmanship, succeeded in returning his cripple bomber safe to the parent carrier..."

Continuing duty in the Saratoga, he served as Air Officer from April to July 1944. "For meritorious service...(in that capacity) during joint operations of United States and British Naval Forces against enemy Japanese bases in the Netherlands East Indies, April 19 and May 17, 1944..." he was awarded the Bronze Star Medal. The citation further states in part: "...Commander Caldwell efficiently organized the Air Department of the Saratoga and, subsequently assisting in the planning of two daring strikes on the enemy bases at Sabang, Sumatra, and Soera­ baja, Java, trained and directed the airmen of his command so expertly that the operations were expeditiously begun without casualty or delay. By his fine initiative and tireless effort, Commander Caldwell contributed materially to the brilliant success of these two vital attacks in destroying or inflicting heavy damage on important hostile shipping, aircraft and shore installations."

Returning to the United States, he reported in July 1944, as Training Officer on the Staff of Commander Naval Air Training, Pensacola, Florida,where he remained until December 1945. For outstanding services in that capacity during the period July 15, 1944 to August 31, 1945, he received a Letter of Commendation, with authorization to wear the Commendation Ribbon, from the Secretary of the Navy. In February 1946 he assumed command of USS Pine Island and under his command that vessel participated in the 1946-1947 Antarctic Expedition. During that expedition he was a member of a PBM search plane which crashed on an isolated ice pack at the tip of Thurston Peninsula on December 30, 1946. Three crew members were killed and he, with five other members of the plane, were unheard of for thirteen days prior to their rescue.

Detached from command of the Pine Island in June 1947, the next month he joined the staff of the Commander in Chief, US Atlantic Fleet as Air Operations Officer. For three years,June l948 June 1951, he was assigned to the Naval Academy, first as Head of the Department of Mathematics and from December 1948 as Head of the Department of Physical Training and Director of Athletics at the Naval Academy.  He next had duty as Chief of Staff to the Commander Carrier Division SIX, serving in that capacity until July 1952 and following instruction at the Naval War College, Newport,Rhode Island, assumed command of the USS Coral Sea in August 1953. On June 23, 1954 he reported to Commander Air Force, US Atlantic Fleet, for duty as Chief of Staff and Aide.  On November 10, 1956 he became Chief of Naval Air Reserve Training, with headquarters at the Naval Air Station, Glenview, Illinois, and in August 1958 was assigned as Commander Carrier Division ONE.

"...Rear Admiral Caldwell ensured that ever-increasing commitments of his forces in the Atlantic and Mediterranean areas could be effectively met despite the deployment of many aviation squadrons to the Pacific area in direct support of the growing conflict in Southeast Asia. His foresight, planning and execution were in large part instrumental in a smooth transition of Atlantic Fleet Naval Air Force reconnaissance attack facilities from Naval Air Station, Sanford, Florida to Naval Air Station, Albany, Georgia. Rear Admiral Caldwell coordinated the successsful introduction of a new aircraft, the A-7A 'Corsair II,' to the Atlantic Fleet and conducted intensive training to qualify fleet squadrons in the aircraft as rapidly as possible.  As Commander Fleet Air, Jacksonville, (he) was task group commander in several major exercises, including CLOVE HITCH, LANTFLEX and MINIBEX series. Additionally, he served as Commander Orange Forces in a joint NATO Exercise, LASHOUT. As Area Coordinator for Sub-Area 'B,' Sixth Naval District, he effectively coordinated area coordination responsibilities for forty-eight shore-based commands..."

On November 1, 1967 he was transferred to the Retired List of the US Navy.