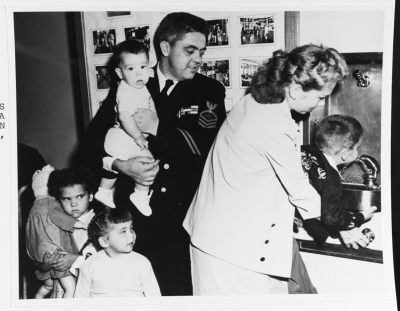 William McKinley Villines, Jr., was born in Denver, Colorado, on 12 June 1922, son of William M. and Tressa (Akers) Villines. He attended North High School in Denver, prior to enlisting on 2 July 1940 in the US Navy. He subsequently advanced in rate and on 15 August 1951 was honorably discharged to accept a commission as Ensign, USN. He was promoted to Lieutenant (junior grade) on 1 January 1953 and to Lieutenant on 1 January 1956. On 1 August 1961, he was transferred to the Retired List of the US Navy.

Following his enlistment in 1940, he had recruit training at the Naval Training Station, San Diego, California, and in October 1940 joined USS Tennessee as Radioman. He was on board that battleship at Pearl Harbor, Territory of Hawaii, when the Japanese attacked the Naval Base there on 7 December 1941. In October 1942 he transferred, in a similar capacity, to USS Nevada, in which he participated in the Attu occupation, and in March 1944 reported for instruction (V-12 student) at Colorado College, Denver. During the period September 1944 to February 1945, he continued instruction at the Montana School of Mines at Butte, from which he received the degree of Bachelor of Science.

Completing a tour of duty in the Office of the Port Director, Japan, he was a student at the Naval Training Center, Great Lakes, Illinois, from March to August 1946, then had further training at the Naval Training School, Treasure Island, San Francisco, California. Finishing the course there in February 1947, he remained as an Instructor until February 1949. He was next assigned as Shopmaster at the Naval Ship Repair Facility, Yokosuka, Japan. “For meritorious service…(in that capacity) during the period June 25, 1950 to June 25, 1951…” he received a Letter of Commendation, with authorization to wear the Commendation Ribbon, from the Commander Naval Forces, Southeast Asia. The citation further states in part:

“A leader with comprehensive knowledge of electronics and a genius for improvisioning, Chief Electronics Technician Villines was highly instrumental in achieving an outstanding record of ship repairs and ship activations during the early days of the Korean crisis. Insisting on the highest standards of workmanship from a small force of Naval personnel and Japanese workmen, he was directly responsible for the electronic work in the activation of many PF’s, LST’s, LSU’s; special communication installations in three ships. By his relentless application and devotion to duty, he contributed greatly to the successful amphibious operations at Pohang-Dong and Inchon, Korea, and to other successful operations of the US Navy during the Korean crisis…”

He reported in July 1951 as an Instructor at the Service School Command, Naval Training Center, Great Lakes, Illinois. In February 1954 he joined USS Yorktown as Electronics Officer and in December 1955 was detached for duty as Technical Assistant at the Naval Correspondence Course Center, Naval Base, Brooklyn, New York. In July 1956 he reported as a student at the Postgraduate School, he completed instruction in July 1958, then had duty in the Office of the Chief of Naval Operations, Navy Department.

In September 1959 he became Executive Officer of the Naval Communications Station, Fort Amador, Canal Zone, where he remained until July 1951. Following a brief assignment in the Thirteenth Naval District, headquartered in Seattle, Washington, he was relieved of active duty pending his retirement, effective 1 August 1961.