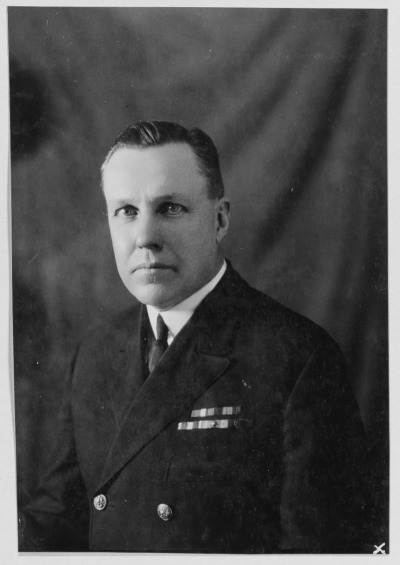 Walter Newhall Vernou was born at Fort Larnard, Pawnee County, Kansas, on 10 February 1878, son of Colonel Alexander Vernou, USA, and Mrs. (Lucy Lewis) Vernou. He received his early education from Post Schools at Fort Clark and Fort Ringgold, Texas; Rush’s School in Philadelphia, Pennsylvania; Seeley’s Academy, San Antonio, Texas; and Webster’s and Detroit High School, in Detroit, Michigan. Appointed Naval Cadet from 12th District of Michigan, he entered the US Naval Academy in September 1897. Graduated on 7 June 1901, he served the two years at sea, then required by law, before being commissioned Ensign from 7 June 1903, and subsequently attained the rank of Rear Admiral, to date from 1 September 1934. He was transferred to the Retired List of the Navy on 1 March 1942, and advanced to the rank of Vice Admiral on the basis of combat citations.

While a Naval Cadet he was detached from the Naval Academy during the Spanish-American War (1898) for active duty aboard USS Newark, and later the USS Peoria. He graduated in June 1901, and served for five years at sea, with successive duty as a Passed Naval Cadet (later retitled Midshipman) in USS Alabama and USS Olympia; and after he was commissioned Ensign, aboard USS Texas and USS Nicholson, having command of the latter for four days before being detached on 24 June 1906.

He returned to the Naval Academy on 10 July 1906, and for three years was an instructor in the Department of Ordnance and Gunnery there. He joined USS New Hampshire on 8 June 1909, and after three years’ duty in that battleship, reported for duty at the Navy Yard, Norfolk, Virginia. He assumed command of USS Beale on 29 June 1914, and on 2 July 1915, was transferred to command of the Fifth Division Torpedo Flotilla, Atlantic Fleet, for a brief period.  On 18 August he joined USS Kansas as Navigator, and detached in December of that year, he had successive duty for two years thereafter in command of USS Beale and USS Cassin, off the Coast of Ireland, and with Naval Forces, France.

He was  awarded the Distinguished Service Medal for service during World War II, and cited as follows: “For exceptionally meritorious service in a duty of great responsibility as Commanding Officer of the USS CASSIN engaged in the important, exacting and hazardous duty of patrolling the waters infested with enemy submarines and mines, in escorting and protecting vitally important convoys of troops and supplies through these waters, and in offensive and defensive action, vigorously and unremittingly prosecuted against all forms of enemy naval activity; and especially for a successful engagement with a German submarine on October 15th,  1917.”

Reaching the United States aboard USS Bridge in December 1917, after the Armistice, he had temporary duty in Washington, D C, before proceeding to Quincy, Massachusetts, to fit out USS Sigourney, then building at the Fore River Shipbuilding Company. He assumed command of that destroyer upon her commissioning on 15 May 1918, and remained in command until transferred on 28 August to temporary command of Squadron Three, Patrol Force and as District Commander Brest, on board USS Carola IV. He returned to command Sigourney from 15 October 1918 until detached on 24 January 1919.

A second tour of duty at the Naval Academy (January 1919 to June 1921), preceded sea duty as Executive Officer of USS Idaho, until 5 July 1922. Ordered to Asiatic Station, he was assigned to USS Rizal and Mine Detachment. He commanded the Rizal from 12 September, that year, until 5 January 1923, when he was transferred to command of USS Pecos. After several months in that command, and brief duty at the Naval Station, Cavite, Philippine Islands, he returned to the United States in July 1923.

Instruction at the Naval War College, Newport, Rhode Island, was followed by duty on the staff there from 29 May 1924 until 2 July 1925. He then left via San Francisco, California, for Shanghai, China, while during the next two years, he had duty as Chief of Staff to Commander in Chief, Asiatic Fleet, USS Pittsburgh. He returned to the Naval War College for staff duty from October 1927 until May 1930.

Following duty in charge of fitting out USS Northampton at the Bethlehem Shipbuilding Corporation, Quincy, Massachusetts, from 12 February 1930, he commanded that cruiser from her commissioning on 17 May 1930, until June 1932. He served as Naval Aide to the President of the United States, at the White House, Washington, DC, for two years, and after attending the senior course at the Naval War College, Newport, Rhode Island, was ordered to duty as Commander Cruiser Division Three, Battle Force, in the rank of Rear Admiral, reporting on 30 March 1935. On 10 June of the next year he assumed command of Cruisers, Battle Force, continuing in command of Cruiser Division Three until relieved of both commands on 22 June 1937.

Duty as Commandant, Fifteenth Naval District, with additional duty as Commanding Officer of the Naval Station at Balboa, Canal Zone, from 4 September 1937, until 10 August 1939 preceded command of Battleship Division Two (USS Tennessee, flagship) until 31 January 1941. During the period prior to the Japanese attack on Pearl Harbor on 7 December, of that year and until 28 February 1942, he served as Senior Member of the Board of Inspection and Survey, Pacific Coast Section, Long Beach, California.

He was transferred to the Retired List of the Navy on 1 March 1942 having attained the statutory age of sixty-four years, and relieved of all active duty.

In addition to the Distinguished Service Medal, Vice Admiral Vernou had the Sampson Medal (USS Newark); the Spanish Campaign Medal; the World War I Victory Medal; Destroyer Clasp (USS Sigourney); the Yangtze Service Medal (USS Pittsburgh); and the American Defense Service Medal, Fleet Clasp. He was also awarded the Order of the Abdon Calderon, first class and diploma, from the Government of Ecuador, and the Belgian Order of the Crown.