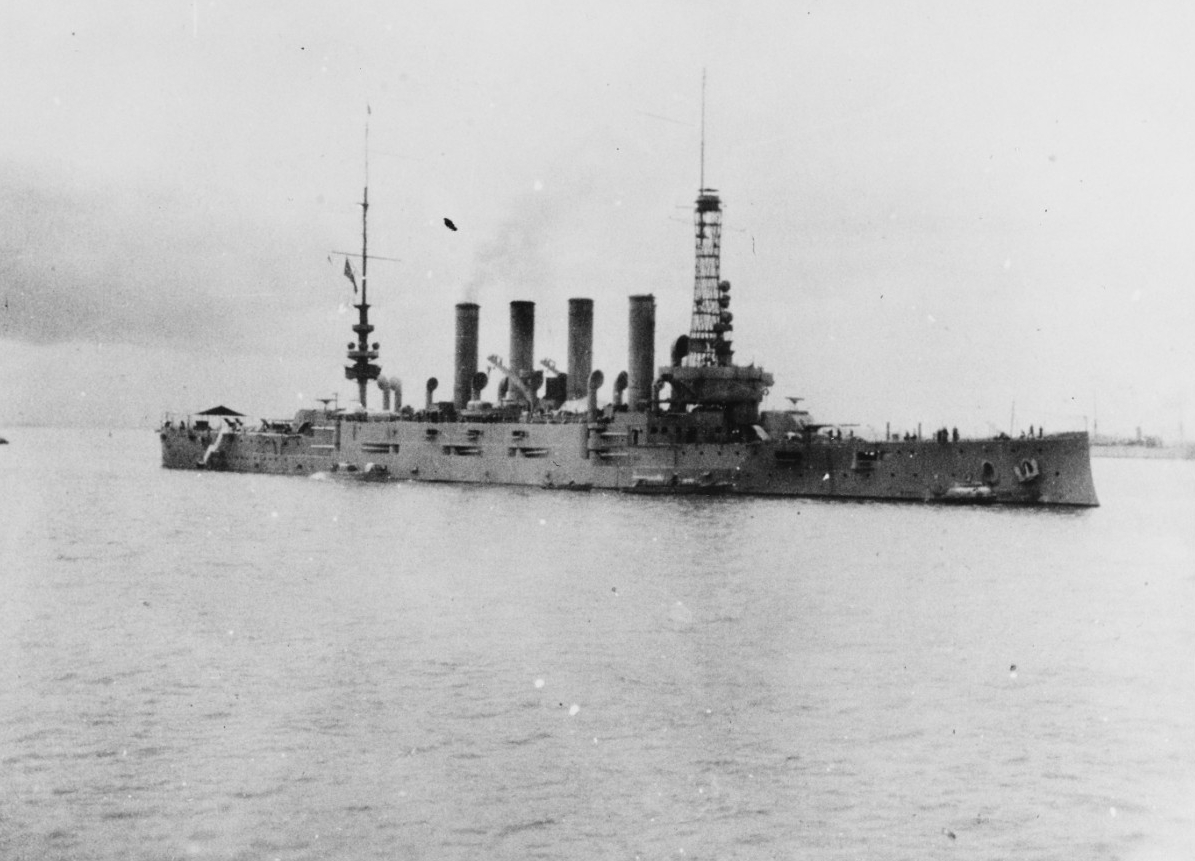 An industrial city in western Pennsylvania.

The second Pittsburgh (Armored Cruiser 4) was laid down as Pennsylvania on 7 August 1901 by William Cramp and Sons, Philadelphia; launched on 22 August 1903; sponsored by Miss Coral Quay, daughter of Senator Matthew S. Quay; and commissioned on 9 March 1905, Capt. Thomas C. McLean in command.

Pennsylvania operated on the East Coast and in the Caribbean until 8 September 1906 when she cleared Newport for a year on the Asiatic Station, returning to San Francisco on 27 September 1907 for west coast duty. She visited Chile and Peru in 1910.

Civilian exhibition stunt pilot Eugene B. Ely made the first take off from a ship on 14 November 1910. Ely flew a 50 hp. Curtiss plane from an 83-foot slanted wooden platform built onto the bow of Birmingham (Cruiser No. 2) as she lay anchored off Old Comfort Point, Hampton Roads, Va. Despite light rain and fog, the pilot elected not to cancel the flight. As he left the platform the plane settled slowly and hit the water, but rose again and landed about two and a half miles away on Willoughby Spit. The aircraft sustained slight splinter damage to the propeller tips.

At 1048 on 18 January 1911, Ely flew the same Curtiss pusher from Selfridge Field south of San Francisco, Calif., and at 1101 landed on board Pennsylvania while she lay at anchor off Hunters Point in San Francisco Bay. The plane made a smooth landing from astern onto a specially built 130-foot long by 32-foot wide platform. At 1158 the plane took off and returned to Selfridge Field, completing the earliest demonstration of the adaptability of aircraft to ship­board operations.

In another of these early demonstrations, civilian aircraft designer and entrepreneur Glenn H. Curtiss taxied a hydroaeroplane alongside Pennsylvania as she lay anchored in San Diego Harbor, during the forenoon watch on 17 February 1911. The plane landed alongside the ship at 0845 and sailors manned the cruiser’s crane to hoist the machine on board. At 0905, Pennsylvania hoisted the aircraft out and it returned to base.

A memorable experiment in the Navy’s search for a shipboard launching device concluded at Hammondsport, N.Y., on 7 September 1911, when Lt. Theodore G. Ellyson made a successful takeoff from an inclined wire rigged from the beach down to the water.

"The engine was started and run at full speed and then I gave the signal to release the machine,” Ellyson’s report described the run, “…I held the machine on the wire as long as possible as I wanted to be sure that I had enough headway to rise and not run the risk of the machine partly rising and then falling…Everything hap­pened so quickly and went off so smoothly that I hardly knew what happened except that I did have to use the ailerons, and that the machine was sensitive to their action.”

Capt. Charles F. Pond, who commanded Pennsylvania, had suggested the technique, and Capt. Washington I. Chambers and Curtiss had developed the method to the point of the test. While in reserve at Puget Sound between 1 July 1911 and 30 May 1913, the cruiser primarily trained naval militia. She was renamed Pittsburgh on 27 August 1912 to free the name Pennsylvania for a new battleship.

Pittsburgh then patrolled the west coast of Mexico during the troubled times of insurrection which led to American involvement with the Verz Cruz landing in April 1914. Later, as a symbol of American might and concern, she served as flagship for Adm. William B. Caperton, Commander in Chief, U.S. Pacific Fleet, during South American patrols and visits during World War I. Cooperating with the British Royal Navy, she scouted for German raiders in the south Atlantic and eastern Pacific. While at Rio de Janeiro in October and November 1918, failure to implement quarantine procedures by Capt. George Bradshaw led to the spread of the deadly strain of Spanish influenza on ship, sickening 663 sailors (80% of the crew) and killing 58 of them.

After returning to the east coast in March 1919, Pittsburgh prepared for duty as flagship for Commander, U.S. Naval Forces in the eastern Mediterranean, for which she sailed from Portsmouth, N.H., on 19 June 1919. Cruising the Adriatic, Aegean, and Black Seas, she joined in the massive relief operations and other humanitarian concerns with which the Navy carried out its quasidiplomatic functions in this troubled area. In June 1920 she sailed north to visit French and British ports and cruise the Baltic on further relief assignments before returning to decommission at Philadelphia on 15 October 1921. 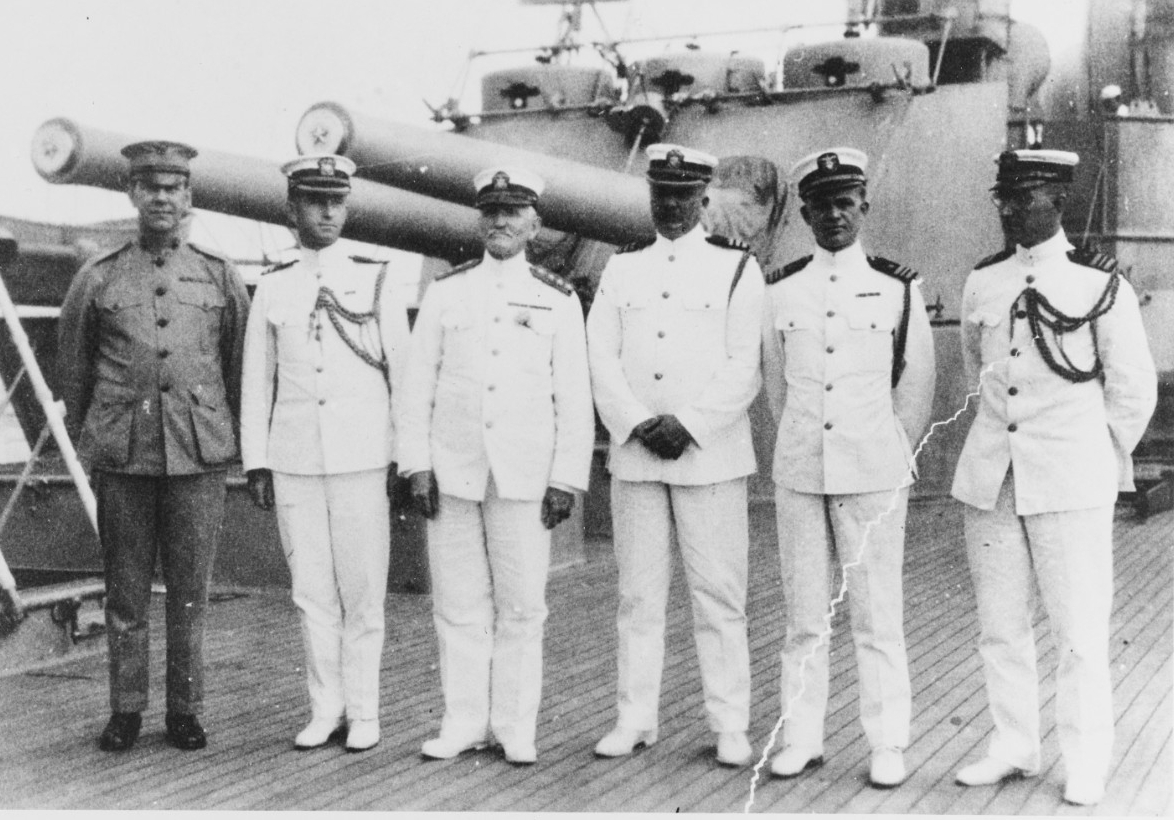 Recommissioned on 2 October 1922, Pittsburgh returned to European and Mediterranean waters as flagship of Naval Forces in Europe, then arrived New York on 17 July 1926 to prepare for flagship duty with the Asiatic Fleet. She sailed on 16 October for Chefoo, arriving on 23 December. Early in January 1927, she landed sailors and Marines to protect Americans and other foreigners in Shanghai from the turmoil and fighting of the Chinese power struggle. When Chiang Kai-shek's Cantonese Army won control of Shanghai in March, Pittsburgh resumed operations on patrol and exercises with the Asiatic Fleet. Closing her long career of service, she carried the Governor General of the Philippines, Dwight F. Davis, on a courtesy cruise to such ports as Saigon, Bangkok, Singapore, Belawan Deli, Batavia, Surabaya, Bali, Macassar, and Sandakan, returning to Manila on 15 April 1931. Six days later she steamed for Suez enroute Hampton Roads, arriving on 26 June 1931. Decommissioning on 10 July 1931, she was sold for scrapping under the terms of the London Treaty to Union Shipbuilding, Baltimore, Md., on 21 December 1931.