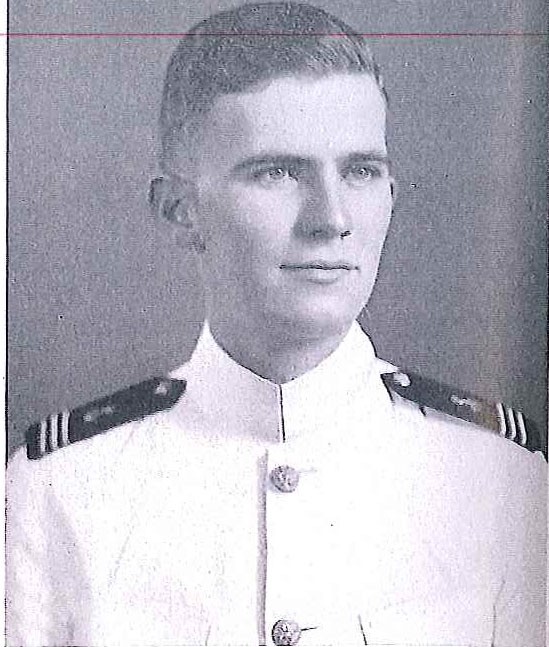 Daniel Edward Bergin was born in New York, New York on December 10, 1919, son of Daniel E. and Eleanor Gertrude (Mangin) Bergin. He graduated from Regis High School in New York City, was attended Manhattan College for a year, prior to entering the US Naval Academy, Annapolis, Maryland, on appointment from his native state in 1938. Graduated with the Class of 1942, on December 19, 1941 (accelerated course due to the war emergency), and commissioned Ensign, he subsequently advanced in rank to that of Rear Admiral, to date from July 1, 1969.

Following graduation from the Naval Academy in 1941, he joined USS Leary (DD-158) as Engineer Officer and while attached to that destroyer (an old “four piper”) participated in convoy operations in the North Atlantic. In November 1943 he reported for fitting out duty in USS Allen M. Sumner (DD-692) at the Federal Shipbuilding and Dry Dock Company, Kearny, New Jersey, and upon the commissioning of that destroyer, January 26, 1944, became her Engineer Officer. In that vessel, he participated in the Luzon attacks and the landings at Mindoro and Lingayen Gulf.

From January to April 1945 he had instruction at the Gunnery School, Washington, DC, after which he had duty afloat as Gunnery Officer of USS Hazelwood (DD-531). Detached from that destroyer in September 1945, he reported the next month as Executive Officer of USS McCaffery (DD-860), operating off the China Coast, and in March 1947 assumed command of USS Spangenberg (DD(R)-223). Under his command, the Spangenberg participated in a scientific expedition to the South Atlantic in May 1947 to observe an eclipse of the sun at sea.

During the period July 1947 to December 1949 he had instruction at several schools, and from January to December 1950 was an Instructor at the Naval Intelligence School, Washington, DC. He next served as Flag Secretary to the Commander Task Group 3.3 and as such was present during the atomic tests at Eniwetok in the spring of 1951. He joined the Intelligence Staff of the Commander in Chief, US Pacific Fleet in July 1951 and in October 1953 reported as Executive Officer of USS Dixie (AD-14). He remained on board that destroyer tender until April 1955 and the next month assumed command of USS Kidd (DD-661).

In February 1965 he assumed command of Destroyer Squadron THREE. He was awarded the Legion of Merit with Combat “V,” “for exceptionally meritorious conduct…while serving as Commanding Carrier Division THREE from February 24, 1965 to August 30, 1966 and while engaged in destroyer operations in the Tonkin Gulf and Southeast Asia areas. He also received the Bronze Star Medal for “meritorious service during the period April to July 1965 while as Commander Destroyer Squadron THREE and Commander Task Group SEVENTY-SEVEN POINT EIGHT in connection with classified operations against the enemy…”