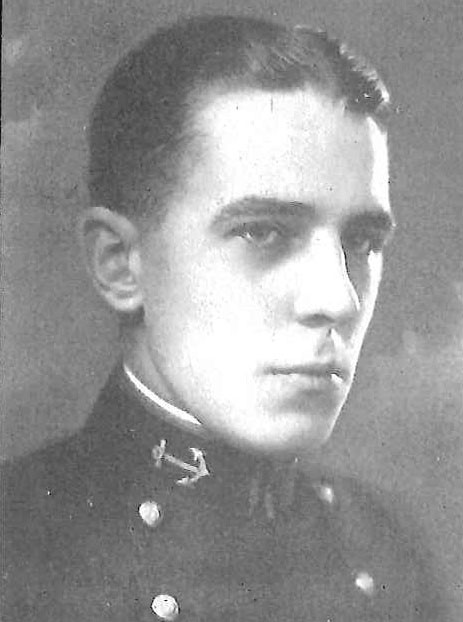 In 1921 he entered the US Naval Academy from the Second Congressional District of Maryland. While a midshipman he was a member of the Combined Musical Clubs and wrote four musical shows. He graduated from Annapolis and was commissioned Ensign in 1925. His advancement to Captain dates from July 20, 1943. On July 24, 1953, the President approved his selection for promotion to Rear Admiral, USN, and on August 3, the Senate confirmed the selection to date from October 1, 1953. On August 1, 1955 he was transferred to the Retired List of the US Navy, and was advanced to the rank of Vice Admiral on the basis of combat awards.

Beginning his naval career in 1925 as Junior officer consecutively in the battleships Texas and Arizona, he served aboard the cruiser Raleigh and the destroyers Kidder and Roper, and was Chief Engineer Officer in the oiler Neches. From July 1932 until May 1935 he served in the Executive Department of the Naval Academy and following that duty, was in turn Executive Officer of USS Montgomery and USS Sicard, both light minelayers with the Pacific Fleet based at Pearl Harbor.

In February 1938 he reported to the Navy Department for duty as Assistant to the Director of Public Relations, in which duty he served until March 1940. He later assumed command of USS Pruitt flagship of Mine Division ONE, Pacific Fleet. On December 2, 1941 he was transferred to command the destroyer Flusser. From July 6, 1942 until October 14, 1943, he was assistant to the Director of the Navy Department’s Office of Public Relations; and from October 14, 1943 until August 1944, was Deputy Director.

He assumed command of Mine Division SEVEN in September 1944. For his services with the command, which operated off Iwo Jima, Okinawa, he was awarded the Legion of Merit with Combat “V.” The citation read in part: “For exceptionally meritorious conduct…as Commander Mine Division SEVEN in action against enemy Japanese forces in the vicinity of Okinawa from March 19 to May 12, 1945. During a period of intensive hostile air action, (he) maintained the ships of his division and others temporarily under his command at a peak of efficiency in operation…during this vital campaign, operating successfully for extended periods of time in dangerous and incompletely charter waters…”

From May 1945 until early in 1946 he was Commander Destroyer Squadron 53. The command consisted of the flagship Cushing and eight other destroyers operating with Admiral Halsey’s Third Fleet. His squadron participated in strikes on Japanese home islands during the closing days of the war. In July 1945, the destroyers in the squadron skirted along the southern coast of Honshu and bombarded radio stations and airports ashore. After the occupation of Japan, Destroyer Squadron 53 sailed into Sagami Wan ahead of the battleship Iowa, and served as picket and harbor control ships in Tokyo Bay.

Returning to the West Coast in November 1945, he later reported to the Navy Department for temporary duty in the Bureau of Naval Personnel. On March 19, 1946 he became District Public Information Officer, Third Naval District and Eastern Sea Frontier, in New York City. The following June he was ordered as Special Assistant for Public Relations to James Forrestal, Secretary of the Navy. He was relieved of that duty in July 1947, and was a student at the National War College, Washington, DC for a year. The next year he was a member of the Joint Staff of Admiral D. C. Ramsey, USN, Commander-in-Chief, Pacific.

He became Chief of Information, Navy Department on July 1, 1954, serving in that capacity until relieved of all active duty pending his retirement, effective August 1, 1955.

Vice Admiral Beecher’s hobby for many years has been song writing. He is the composer of some 700 songs. Many of these have been published, and among them are “A Song of Old Hawaii”, “Nimitz, Halsey and Me”, and the musical score for “The Ramparts We Watch”, a movie by The March of Time. He was technical advisor for the Warner Brothers’ movie Shipmates Forever and contributed to the lyrics of the picture’s these song “Don’t Give Up the Ship.” He is a member of the American Society of Composers, Authors, and Publishers (ASCAP).