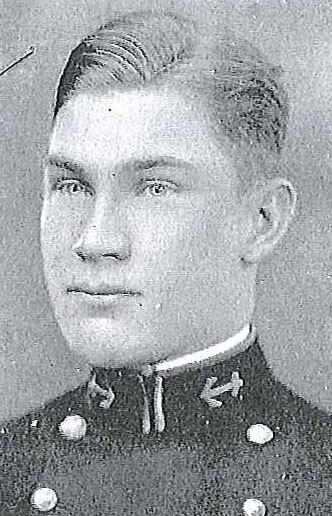 Evan Edward Fickling was born in Columbia, South Carolina, on March 18, 1905, son of Matthew Moore Fickling and the late Suzanna Douglas Fickling. He attended the University of South Carolina for two years and entered the US Naval Academy, Annapolis, Maryland, on appointment from South Carolina in 1924. As a Midshipman he was a member of the B. Squad Football Team and participated in Class boxing and lacrosse. He was graduated and commissioned Ensign on June 7, 1928, and through subsequent promotions attained the rank of Captain with date of rank March 25, 1945.

Upon graduation from Naval Academy in June 1928, he was assigned to the USS Wyoming, and during the next two years had various duties as a junior officer aboard that battleship. He was detached for flight training at the Naval Air Station, Pensacola, Florida, and upon completion of the course was designated Naval Aviator in February 1951, and ordered to the USS Augusta. He was aboard that cruiser when she reached Shanghai, China, in November 1933, as Relief for the USS Houston, flagship of the Commander in Chief, Asiatic Fleet, and in her cruised to Japan, the Philippines, Australia and the East Indies. In April 1935 he was detached with orders to duty as Commanding Officer, Aircraft Utility Unit, Asiatic Fleet, attached to the USS Heron, seaplane tender.

Changing from the Atlantic to the Pacific area in 1943, he joined the newly commissioned aircraft carrier, USS Hornet, and served as her Executive Officer during operations in Palau, Truk, Hollandia, the Marshalls, and Marianas Islands; First and Second Battles of the Philippines Sea; and the Okinawa Campaign. He is entitled to the Ribbon for, and a facsimile of, the Presidential Unit Citation warded the Hornet and her attached Air Groups, “For extraordinary heroism in action against enemy Japanese forces the air, ashore and afloat in the Pacific War Area March 29, 1944 to June 10, 1945…”

Orders of April 1945 brought him to the United States for duty in the Bureau of Aeronautics, Navy Department, Washington, DC. That assignment terminated in the summer of 1948, when he was ordered to Okinawa, in the Western Pacific, for duty as Commanding Officer of the Naval Air Facility at Naha. A year later he returned to the United States to command of the Naval Air Station, Minneapolis, Minnesota. On December 20, 1950 he assumed command of the USS Rendova, carrier escort vessel, and after a year in that command became Chief of Staff and Aide to Commander Carrier Division 17, Pacific Fleet.