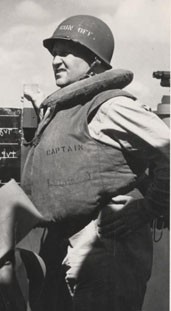 Commodore Kiefer was born in Blackfoot, Idaho, on 4 April 1896 the son of E.C.W. Kiefer and Mrs. Tina W. (Glade) Kiefer. He attended Lincoln (Nebraska) High School, before his appointment to the US Naval Academy, Annapolis, Maryland, from the First District of Nebraska in 1915. Graduated and commissioned Ensign in June 1918, with the Class of 1919, he progressed in grade until his promotion to Commodore, 24 May 1945.

After graduation from the Academy, he served in the USS St. Louis for a brief time until ordered to duty with the Destroyer Force based on Brest, France. He served in that assignment, in the USS Corona, USS Favorite and the USS Chesapeake, from August 1918 until October 1919. Following his return to the United States, he had duty in the USS Pennsylvania and the USS Nevada until June 1922 when he reported to the Naval Air Station, Pensacola, Florida, for flight training. Designated naval aviator 26 December 1922, he had served continuously with naval aviation from that time until his death in November 1945.

In April 1923, he reported to Aircraft Squadrons, Battle Fleet, and served until January 1926 with Observation Squadron 1, attached to the USS Aroostook, and with Observation Squadron 2, aviation unit of the USS California. Following duty as an Instructor at the Pensacola Naval Air Station for a year and one-half, he was under instruction in aeronautical engineering at the Postgraduate School, Annapolis, Maryland, and Massachusetts Institute of Technology, Cambridge, Massachusetts, where he received the degree Master of Science in June 1929. In October of that year he joined Scouting Squadron 3, based on the aircraft carrier Lexington, and in May 1930 was transferred to duty in the carrier Saratoga.

Between November 1931 and June 1934, he was on duty at Pearl Harbor, T.H., serving consecutively at the Fleet Air Base until August 1932; as operations officer, Aircraft Squadrons, until February 1933; and in command of Patrol Squadron 4, based there, until the completion of that tour. He next commanded Scouting Squadron 5, aviation unit of the USS Memphis, from June 1934 until June 1935, and the following two and one half years was engineer officer on the staff of Commander, Aircraft, Base Force, USS Wright, flagship, and later Commander, Aircraft, Battle Force, with the USS Saratoga, as flagship. In January 1938, he rejoined the Wright as engineer officer on the staff of Commander, Aircraft, Scouting Force, serving in that assignment six months.

He was Inspector of Naval Aircraft, US Aircraft Corporation, Pratt and Whitney Division, East Hartford, Connecticut, from July 1938 until April 1941. In May of that year he returned to sea as executive officer of the Wright, serving in that capacity until 11 February 1942, when he was transferred to duty as executive officer of the USS Yorktown. During his duty aboard this carrier, which extended to 7 June 1942, when she was lost as the result of enemy action in the Battle of Midway where the Japanese Navy suffered its first decisive defeat in 350 years, the Yorktown also participated in the raids on Salamaua and Lae in March 1942, and in the Battle of the Coral Sea in May of that year. After serving in this carrier, he was awarded the Distinguished Service Medal for "exceptionally meritorious service...(he) contributed greatly toward bringing the ship and her air group to a high state of morale, efficiency and readiness for battle exhibited by the Yorktown in her splendid contribution to the victory attained by our forces in the actions comprising the Battle of the Coral Sea..." He was also awarded the Navy Cross for "extraordinary heroism as Executive Officer of the USS Yorktown in preparations for, during and after action against enemy Japanese forces in the Battle of Midway, on June 4, 1942. ...When the stricken vessel was being gutted by raging fires, he, being unable to obtain rescue breathing apparatus from his own smoke filled cabin, entered the photographic laboratory, which was a flaming inferno from burning films, and conducted the first fire-fighting there. Later, while directing the abandonment of the Yorktown, Commander Kiefer, in lowering an injured man into a life raft, burned his hands so severely that when he himself went over the side and descended by line, he was unable to support his own weight. In the resultant fall he struck the ship's armor belt and suffered a compound fracture of the foot and ankle. Despite acute pain, he gallantly swam alongside of and pushed a life raft toward a rescuing destroyer until he became so completely exhausted that he had to be pulled out of the water..."

Following the loss of the Yorktown, Commodore Kiefer was hospitalized until January 1943, when he assumed command of the Naval Air Station, Olathe, Kansas. He remained there until August 1943, interspersed with duty as Head of the Aviation Department at the Naval Academy between February and April 1943. Transferred to duty as Chief of Staff and Aide to the Chief of Naval Air Primary Training Command, Fairfax Airport, Kansas City, Kansas, and from November 1943 to January 1944 served as Acting Chief of that Command.

Detached from the Primary Training Command assignment at Kansas City in April 1944, he fitted out the USS Ticonderoga, assuming command of that aircraft carrier when she was commissioned May 1944. During his command, the Ticonderoga's Air Group inflicted heavy damage to the Japanese. Severely wounded when the Ticonderoga was twice struck by enemy suicide planes near Formosa on 21 January 1945, Commodore Kiefer remained on the bridge for twelve hours directed his heavily damaged ship. For his services in command of the Ticonderoga, he was awarded the Silver Star Medal "...On 21 January 1945 when his ship was severely damaged by enemy air attack, in spite of serious wounds, he remained on the bridge and continued to direct operations until his ship was out of danger from enemy action..." Commodore Kiefer was killed in a plane crash in the Fishkill Mountains, Fishkill, New York, on 11 November 1945. He was buried with full military honors in Arlington Cemetery on 16 November 1945.