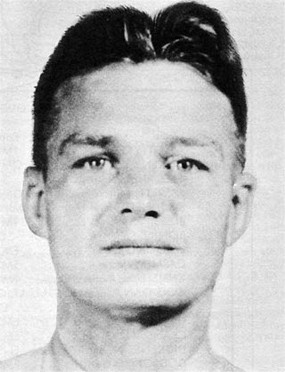 David Zabriskie was born in Los Angeles, California, on 30 August 1912.  He attended Hollywood High School and enlisted in the US Naval Reserve as a Seaman, Second Class, on 30 June 1930. On 8 June 1932, he was honorably discharged to enter the US Naval Academy on appointment as Midshipman from the Naval Reserve. At the Naval Academy he participated in football, boxing and lacrosse. Graduated and commissioned Ensign on 4 June 1936, he subsequently advanced to the rank of Lieutenant Commander, to date from 1 May 1943.

After graduation from the Naval Academy, he was assigned to USS Colorado, in which he served briefly, and from 22 August 1936 to 1 March 1937, and duty on board USS New York. Transferred from the latter battleship to USS New Orleans, he served in that cruiser until July 1938, and during the next two and one half years had successive service in USS Peary and USS Augusta, operating with the Asiatic Fleet. On 4 February 1941 he was ordered to Motor Torpedo Boat Squadron TWO, at Miami, Florida, thence to USS PT-16 for instruction in Motor Torpedo boats and torpedoes. On 7 April  he reported to the Electric Boat Company, Bayonne, New Jersey, to assist in fitting out MTB Squadron THREE, and in April left that Squadron for nine month’s duty with MTB Squadron ONE.  He was detached several days before the United States entered World War II on 8 December 1941.

From 2 January until 28 March 1942, he had instruction in submarines at the Submarine School, New London, Connecticut, and on 23 April, that year, he reported to Commander Submarines, Pacific Fleet, and qualified in Submarines, on 4 December 1942, and served in various capacities for a year thereafter. He was awarded the Silver Star Medal “For conspicuous gallantry and intrepidity in action…during six highly successful war patrols in Japanese controlled waters…”  The citation continues:

“Performing his essential duties with cool and courageous determination, Lieutenant Commander Zabriskie served as Navigator, Diving Officer, Assistant Approach Officer and Officer of the Deck during these hazardous missions in which his ship succeeded in sinking or damaging seventeen hostile vessels.  His outstanding skill and tenacious devotion to duty contributed materially to the success of our operations at this time and were in keeping with the highest traditions of the US Naval Service.”

He was also awarded Letter of Commendation, by Commander South Pacific Force, which follows in part:  “…I take pleasure in commending you in that during the Fourth War Patrol conducted by the USS Tautog, in which a mine field was laid in waters rigorously controlled by enemy aircraft and surface operations, you, by your thorough planning and administration, and by your performance of duty as Officer of the Deck, were largely responsible for the successful execution of this mission…”

He was awarded a Gold Star in lieu of the Second Silver Star Medal “For conspicuous gallantry and intrepidity as Commanding Officer of the USS Herring during the Eighth War Patrol of that vessel in enemy controlled waters…” The citation states that “Commander Zabriskie boldly penetrated hostile escort screens throughout areas heavily patrolled by Japanese air and surface forces and launched vigorous torpedo attacks against ships vital to the enemy’s war effort, destroying a notable amount of tonnage despite fierce depth-charge attacks…”

He was officially determined to be “Missing in Action” as of 5 July 1944, having been serving on board the USS Herring when that submarine failed to return from a war patrol in the vicinity of the Kurile Islands, Asiatic Area. In compliance with Section 5 of Public Law 490, as amended, death is presumed to have occurred on 17 January 1946.

In addition to the Silver Star Medal with Gold Star in lieu of the second similar Medal, and the Commendation Ribbon, Lieutenant Commander Zabriskie was entitled to the Purple Heart Medal awarded posthumously, and the Ribbon for and facsimile of the Navy Unit Commendation awarded the USS Tautog. He was also entitled to the China Service Medal; American Defense Service Medal, Fleet Clasp; Asiatic-Pacific Campaign Medal with two engagement starts; and the World War II Victory Medal.