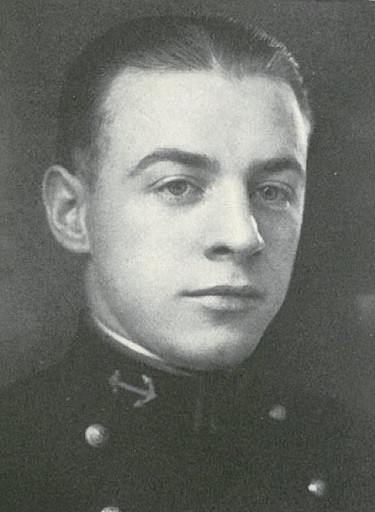 Jesse Clyburn Sowell was born in Lancaster, South Carolina, on 16 October 1903, son of Jesse Clyburn Sowell, Sr. and Mary Olivia Ferguson. He attended public schools in Lancaster and The Citadel at Charleston, South Carolina, before entering the US Naval Academy, Annapolis, Maryland, from his native state in 1921. As a midshipman he excelled in gymnastics, being Inter-collegiate Champion, Parallel Bars in 1924. Graduated and commissioned Ensign on 4 June 1925, he subsequently attained the rank of Captain, to date from 20 July 1943.

Following graduation from the Naval Academy in June 1925, he was assigned to the USS Memphis, a unit of Light Cruiser Divisions, and served as a junior officer aboard that cruiser while she later operated as flagship of Commander Naval Forces, Europe, until June 1928. Thereafter until February 1930 he served in the USS McCormick, operating with Division THIRTY-NINE, Destroyer Squadron, Asiatic Fleet. Completing nine months' duty in the USS Luzon, on Yangtze patrol, he reported in December 1930 to the USS Bittern, a unit of Mine Detachment, Asiatic Fleet. Detached from the Bittern in August 1931, he joined the USS Montgomery, based at San Diego, California.

From July 1932 to May 1934 he had general line instruction at the Postgraduate School, Annapolis, Maryland, after which, during June 1934 he had further instruction at the Naval Boiler Factory, Philadelphia, Pennsylvania. Completing duty in USS Melville, tender for Destroyers, Battle Force, he joined SS Farragut, in June 1935, as Engineer Officer. Serving in th at destroyer while she operated with Destroyers Scouting Force; as Flagship of Destroyer Squadron TWENTY, Scouting Force, successfully. In March 1937 he returned to the United States and was assigned to the Naval Examining Board, Navy Department, Washington, DC. He served as an Instructor in the Department of Marine Engineering at the Naval Academy from September 1937 to May 1939, after which he assumed command of USS Decatur.

Relieved of command of the Decatur in December 1941, he had duty in the Bureau of Navigation, Navy Department, Washington, DC. In January 1942 he assumed command of the USS Moffett, and while on anti-submarine patrol, assisted on 17 May 1943 in the destruction of a German submarine which had been damaged previously by Navy patrol bombers and the capture of her crew. For this action he received a Letter of Commendation with Ribbon and 'V' from the Commander in Chief, US Atlantic Fleet.

He commanded Destroyer Division THIRTY-TWO, between August and December 1943, and for meritorious service as Commander of that Destroyer Division "while performing convoy duty in the Central Mediterranean on November 7, 1943..." he received a Letter of Commendation with Ribbon and Combat 'V,' from the Commander, Eighth Fleet. He next served as Commander, Escort, US Atlantic Fleet, and for "exceptionally meritorious conduct...as Commander of the Escort of a large United States Convoy in the Mediterranean, May 11, 1944..." he was awarded the Legion of Merit, with Combat Distinguishing Device 'V.' The citation continues in part as follows:

"...Engaged in operations to protect ships transporting vital war materials and combatant personnel when the convoy was subjected to a coordinated torpedo and high-level bombing attack by approximately forty hostile planes, (he) quickly completed all dispositions in alerting the convoy and in ordering a smoke screen, thereby contributing immeasurably to the disruption of the attack with a high percentage of loss to the enemy..."

He was also awarded a Gold Star in lieu of a Second Legion of Merit with Combat 'V.' The citation states in part as follows: "For exceptionally meritorious conduct...during operations against enemy forces while serving as Atlantic Fleet Escort Commander protecting trans-Atlantic convoys during World War II..."

In September 1944, he reported as Assistant Operations Officer on the staff of the Commander in Chief, US Atlantic Fleet. "For exceptionally meritorious conduct...from September 1944 to September 1945," he was awarded a Gold Star in lieu of a Third Legion of Merit. The citation continues in part as follows: "Exercising outstanding professional skill and sound judgment (he) played a vital part in directing the operations of Atlantic Fleet units during the closing months of the anti-submarine campaign in the Atlantic. After V-E Day he rendered invaluable service in expediting the efficient redeployment of Atlantic Fleet units to the Pacific."

He returned to the United States in September 1945, and reported for duty in the Office of the Chief of Naval Operations, Navy Department. He remained in there until July 1949, when he assumed command of the USS Juneau. Relieved of that command, he had orders in February 1950 to report to the National War College, Washington, DC for instruction.

In addition to the Legion of Merit with two Gold Stars, and Combat 'V' and the Commendation Ribbon, with Star and Combat 'V,' Captain Sowell has the Yangtze Service Medal; the American Defense Service Medal with Bronze 'A;' the American Campaign Medal with one bronze star; the Asiatic-Pacific Campaign Medal; the European-African-Middle Eastern campaign Medal; the World War II Victory Medal; and the Navy Occupation Medal, Europe Clasp. He also was awarded the 'Medal of Services of War,' with Citation and Diploma, by the Government of Brazil.

He was married to the former Helen Phillips of Washington, DC and they had a daughter. Captain Sowell passed away 16 February 1977.