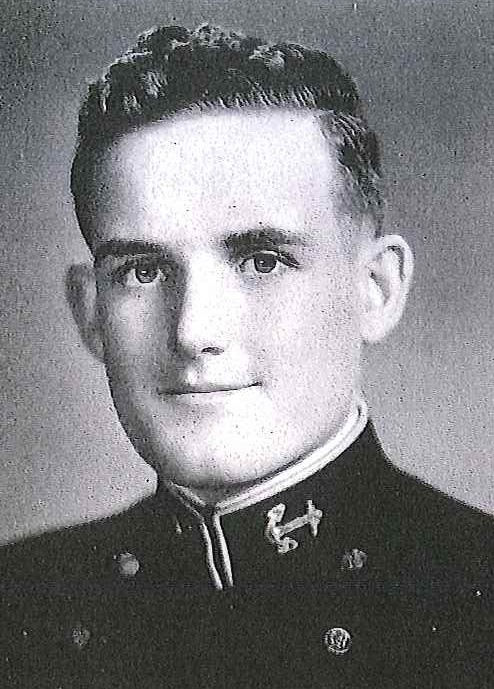 Walter Dedrick was born in Billings, Montana, on September 28, 1921, son of Warren A. and Lila (Rhoades) Dedrick (now deceased). He attended Woodrow Wilson High School, Long Beach, California and the University of California at Berkeley, prior to entering the US Naval Academy, Annapolis, Maryland, on appointment from the Eighteenth District of California in 1941. Graduated and commissioned Ensign, with the Class of 1945, on June 7, 1944 (course of instruction shortened due to World War II), he subsequently advanced in rank attaining that of Rear Admiral, to date from August 1, 1972.

Following graduation from the Naval Academy in 1944, he had brief instruction at the Naval Air Station, Jacksonville, Florida and in August 1944 joined USS William D. Porter. While attached to that vessel he saw action during the landings on Leyte Gulf, Mindoro, Lingayen, Kerama Retto and Okinawa Campaigns. Detached from that destroyer in April 1945, he next had submarine training at the Submarine Base, New London, Connecticut. In September 1945 he was assigned fitting out duty in USS Cusk (SS-348), building at the Electric Boat Company, Groton, Connecticut. He reported on board that submarine upon her commissioning February 5, 1946. The Cusk was the first submarine to launch a guided missile from her own deck on February 12, 1947.

He had instruction (September 1949-April 1950) at the Naval School (Electronics), Treasure Island, San Francisco, California, after which he served for two months in the submarine Carp (SS 338). He was a student at the Naval Postgraduate School, Annapolis, Maryland (school moved to Monterey, California, in July 1951) and during July and August 1952 had further instruction at the University of Minnesota at Minneapolis. He next attended the Massachusetts Institute of Technology at Cambridge, from which he received the degree of Master of Science.He rejoined the USS Cusk in June 1953 to serve as her Executive Officer and Navigator until May 1955, then was assigned as Special Assistant in Submarine Matters in the Naval Reactors Branch, US Atomic Energy Commission, Washington, DC. During October and November 1958, he had instruction at the Atomic Energy Commission, Bettis Plant, Pittsburgh, Pennsylvania, and upon completing his training reported for pre-commissioning duty in USS Halibut (SSG(N) 587).

He became Officer in Charge of that nuclear powered guided missile submarine, building at the Mare Island (California) Naval Shipyard, in August 1958 and upon commissioning, January 4, 1960, assumed command. For meritorious service while in command of the Halibut, he was awarded a Navy Commendation Medal. Detached from command of that undersea craft in July 1961, he again had pre-commissioning duty, this tine in USS Thomas A. Edison (SSB(N) 60), and assumed command of the Gold Crew of that fleet ballistic missile submarine upon her commissioning, March 10, 1962.

In October 1964 he was assigned to the Office of the Chief of Naval Operations, Navy Department, Washington, DC, and served as Polaris Executive in the Stike Warfare Division until September 1966, when he became Director of Polaris Operations on the Staff of the Commander in Chief, Atlantic; Commander in Chief, US Atlantic Fleet; and Allied Staff Commander in Chief, Western Atlantic. He was awarded the Legion of Merit “for exceptionally meritorious service…” in that capacity. The citation further states in part: “…Captain Dedrick contributed significantly to the successful accomplishment of the mission of the Atlantic Command. Through his exemplary planning ability and sound judgment, he was instrumental in formulating policy for the employment of the Polaris and Poseidon strategic weapon systems…”

During the period September 1968 to August 1970 he commanded Submarine Squadron SIXTEEN and “for exceptionally meritorious conduct…from January 1969 to August 1970…” he was awarded a Gold Star in lieu of the Second Legion of Merit. The citation continues in part: “…Captain Dedrick successfully executed important operational command assignments and contributed directly to the improved operational readiness of submarine in his squadron…”

In September 1970 he reported as Project Manager of the Torpedo MK-48 Weapon System Project, Naval Ordnance Systems Command, Navy Department, Washington, DC and on February 15, 1974 he became Deputy Commander of the Undersea Warfare Directorate of that systems command.