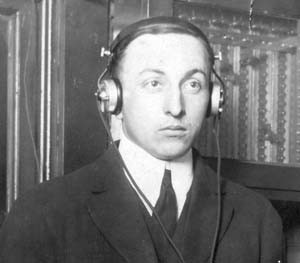 Leo C. Young was born on 12 January 1891 and grew up in a rural part of Ohio near Van Wert. His interest in wireless began in 1905 when he constructed his first radio receiver and progressed throughout his teenage years. In 1913, Young was invited to set up a powerful amateur radio station at Fort Wayne High School. The one-kilowatt transmitter became the central control station for the Navy-Amateur Network. Young worked directly with Navy Radio Station NAJ, located at Great Lakes, Illinois, in administering this network.

When World War I came along, both the Army Signal Corps and the Navy were interested in enlisting his services for the war effort. Young enlisted as a radio specialist in the Naval Reserve Force soon after the United States declared war on Germany in the early part of 1917. After short operating assignments at Navy stations around the Great Lakes, Young was assigned to duty in radio research and development duties at Great Lakes where he was detailed to work directly with Dr. A. Hoyt Taylor, then District Director of Naval Communications. This began an association that was to continue until Dr. Taylor's retirement in 1947.

Both men were soon transferred to Belmar, New Jersey, where Taylor was the communications officer in charge of several high-power stations on the East Coast. Young worked on the development of low-frequency radio receiving equipment until 1918 when he was ordered to Washington to join in the establishment of the Naval Aircraft Radio Laboratory, first at the Bureau of Standards until 1919, then at the Naval Air Station at Anacostia, Maryland, where he worked on high-frequency radio propagation. Taylor served briefly as head of an experimental division of the Naval Air Station at Hampton Roads, Virginia, where research on aircraft radio was undertaken. The pair was reunited in 1919 when Taylor was placed in command of the Naval Aircraft Radio Laboratory.

During 1922, Taylor and Young observed reflections of high-frequency radio waves from ships on the Potomac River as they passed between a transmitter and a portable receiver. This led to a radar development project directed by Taylor, and a 200-MHz radar was ready for installation on a ship by 1937. When the Naval Research Laboratory (NRL) was established in 1923, Taylor became superintendent of its Radio Division and Leo Young one of his leading researchers.

In 1930, Leo Young was placed in charge of a research project at the NRL that resulted in the first detection of aircraft by reflected radio waves. Four years later, he was responsible for research that led to the development of the first system using radio pulses for range determination of stationary or moving objects. This system became known as radar, an acronym for radio detection and ranging.

Young continued to work at the NRL as a research scientist until his retirement in 1961. His many honors included the Presidential Certificate of Merit from President Truman in 1946, the Stuart Ballantine Medal of the Franklin Institute in 1957, and the Navy Department's Distinguished Civilian Service Award in 1958.

Leo Young was also a pioneer in amateur radio and helped conduct the original research that led to the utilization of high frequencies for worldwide radio communications. In recognition of his contributions to the field of radio, the Quarter-Century Wireless Association awarded him a 50-year gold certificate in 1966.