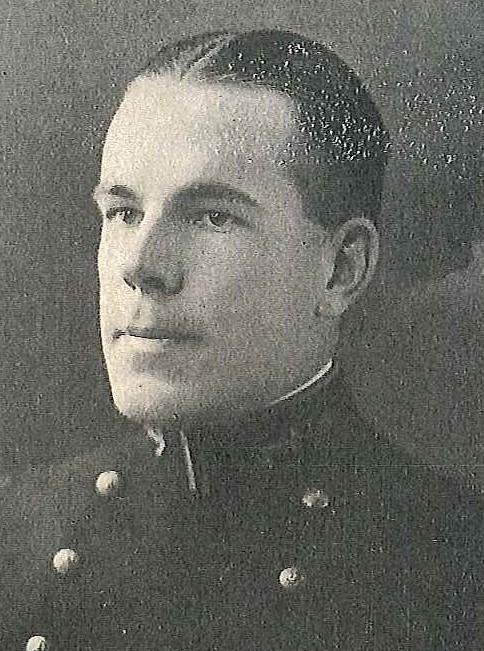 Captain Floyd, born March 14, 1905, in Healdsburg, California, attended Pine Ridge and Guilford Elementary Schools, near Healdsburg, and Healdsburg High School before his appointment to the United States Naval Academy on June 13, 1922, from his native state.  While a Midshipman, he was a member of the Naval Academy Varsity Soccer, Baseball and Wrestling teams.  Graduating with distinction, fourth in a class of 456, and commissioned Ensign on June 3, 1926, he subsequently progressed through the grades to the rank of Captain on August 30, 1944, to rank from August 1, 1943.

Following graduation in 1926, Captain Floyd was assigned to the USS Idaho, where for the next three and one-half years he first had junior watch and gunnery division duties, and later served as watch and Anti-Aircraft Division Officer.  From December, 1929 until June, 1932, he was attached to USS Noa serving in the capacity of torpedo and communications officer, and during this period he had five months’ temporary duty with Battle Fleet Torpedo School.  The next two years were spent at the Postgraduate School, Annapolis, Maryland, under instruction in Ordnance Engineering (Ballistics), and a third year at the United States Naval Gun Factory, Washington, DC and various other ordnance activities and stations.  He completed the postgraduate course in Ordnance on May 29, 1935.

Captain Floyd again returned to sea aboard USS Salt Lake City in June, 1935, and crossed the equator on the cruise to Valparaiso, Chile, in May, 1936.  From July, 1938, to June, 1940, he served first as assistant to the main battery officer, later as main battery officer at the US Naval Proving Ground, Dahlgren, Virginia, after which he joined the USS Chicago as gunnery officer.  While attached to the Chicago, flagship of Cruiser Scouting Force, he made the Good Will Cruise to Australia in March, 1941.  He had temporary duty with the Heavy Cruiser Main Battery Gunnery School and participated in war training operations of the Chicago in the Central Pacific during the months preceding the Japanese attack on Pearl Harbor in December, 1941.

From December, 1941 when war was declared by the United States upon Japan, Germany and Italy, until June, 1942, Captain Floyd as gunnery officer of the USS Chicago, operating successively with Task Force Eleven and the ANZAC Squadron, participated in the Salamaua-Lae raind in March, 1942; The Tulagi raind on May 4, 1942; the Battle of the Coral Sea, May 7-8, 1942; and the action action against midget submarines in Sidney Harbor, Australia, May 31-June 1, 1942.  In July and August, 1942, the Chicago, part of the screening force took part in the initial landings of the Marines on Tulagi and Guadalcanal and the first Battle of Savo Island.  In January 1943, the Chicago, still operating with the Southwest Pacific Force, was a unit of the covering force or the convoy in the Battle of Rennel Island.  She was torpedoed and badly damaged by enemy planes in a night attack on January 29, and after being taken in tow by another cruiser and later, a tug, she was attacked again by 13 planes the next afternoon and sank immediately after being abandoned.

Captain Floyd, following leave after the sinking of the Chicago reported in May, 1943, for duty as Commanding Officer of Landing Craft Group Three, and in that capacity participated in the Invasion of Sicily on July 10 to 24, 1943.  For his services during this invasion, he was awarded the Legion of Merit (with Combat Distinguishing Device) with the following citation:

Captain Floyd served as Task Unit Commander during landings in the Gulf of Salerno September 9 to October 8, 1943, and later as Naval Liaison Officer, US Fifth Army, from November 20 to December 15, 1943.  He was senior naval officer of advanced landings under the British flag officer command in Western Italy, in December, 1943 and January 1944, and as much commanded the naval units participating in the Commando landing behind German lines in the Gulf of Gaeta on December 30, 1943.  He also had temporary duty as Task Group Commander in landings in the Anzio-Nettuno area from January 20 to February 4, 1944.

From April to June 1944, Captain Floyd served as Commander, LST Flotilla One, operating with the 8th Amphibious Force in the Mediterranean, and from June to November, 1944, served as Deputy Chief of Staff for Planning on the staff of Commander, 8th Amphibious Force.  During the later period he had temporary duty with Commander, 12th Fleet, first as observer during the invasion of Normandy in June, 1944, and later as Task Group Commander in the invasion of Southern France in August and September, 1944.  For meritorious services he was awarded a Gold Star in lieu of a second Legion of Merit with citation as follows:

GOLD STAR in lieu of Second LEGION OF MERIT:

"For exceptionally meritorious conduct in the performance of outstanding services while serving as Commander of a Beach Assault Group prior to and during the amphibious invasion of Southern France in August 1944.  Captain Floyd, displaying a high degree of skill and aggressive leadership, brought his assault units in convoy from mounting ports, through swept channels and prescribed routes in safe passage to the assault area.  By skillful seamanship and sound advance planning, he expediously landed the assault troops, their equipment and supplies against enemy resistance over the designated beaches on the Coast of Southern France.  Subsequently his efficient control of beach unloading activities in connection with the vital disembarkation and with the reorganization of units to support the follow-up mission contributed materially to the success of the invasion and to the proper maintenance of the rapidly advancing Allied Armies into enemy occupied territory.  The exceptional skill, sound judgment, and outstanding devotion to duty displayed by Captain Floyd reflected great credit upon himself and the Naval Service.”

Captain Floyd was also awarded the Croix de Guerre with Silver Star by French Government, with the following citation:

“During the landing operations in Provence in August, 1944, he displayed the highest military qualities and played an outstanding part in their brilliant success.”

Returning to the United States, Captain Floyd reported in December, 1944, to the Naval Proving Ground, Dahlgren, Virginia, where he served for sixteen months as armament officer and for seven months as experimental officer.  For “outstanding performance of duty as Head of the Armament Department at the US Naval Proving Ground, Dahlgren, Virginia from December 1944 to September 1945,” he received a Letter of Commendation from the Chief of the Bureau of Ordnance, Navy Department.

In November 1946, Captain Floyd was ordered to report to the Commander, Naval Forces, Europe, to be Deputy Chief of Staff, and Chief of Operations Division.