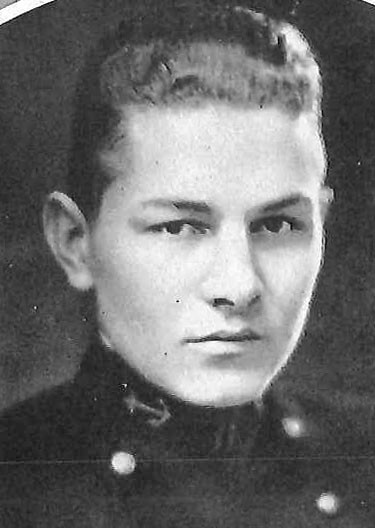 Joseph Ellsworth Chapman was born in Arlington, Nebraska, on January 10, 1901, son of the late Joseph C. and Louise Hammang Chapman. He was graduated from the Arlington High School before entering the US Naval Academy, Annapolis, Maryland, on appointment of Senator G.W Norris of Nebraska, on July 15, 1919. As a Midshipman he participated in track and basketball. Upon graduation he was appointed Ensign to date from June 7, 1923, and subsequently attained the rank of captain to date from May 1, 1943.

After graduation from the Naval Academy in June 1923 he had the usual duties of a junior line officer, including four years at sea with successive service in USS Idaho, a unit of Battleship Division 4, Battle Fleet; USS Argonne, submarine tender on the West Coast; USS Preble, operating with Destroyer Division 45, on Asiatic Station. In July 1927 he reported to the Receiving Barracks, Puget Sound, Washington, and was assigned to USS Neches, a unit of Fleet Base Force, for further sea duty for a year.

He returned to Annapolis in June 1928 for instruction in Mechanical Engineering. Continuing the course at various places, under supervision of the Postgraduate School, he received the degree of Master of Science from Columbia University, New York City, in 1930. In October of that year he reported to the Navy Yard, Puget Sound, Washington, for duty in connection with fitting out USS Louisville. He joined that cruiser on her commissioning in January 1931, and served aboard until June 1934, while she operated with Cruiser Division 5, Scouting Force.

From June 1943 until August 1936 he had duty in the Schenectady, New York, District, as Assistant Inspector o Naval Material. After several months pre-commissioning duty with USS Winslow, at the New York Shipbuilding Corporation, Camden, New Jersey, he served as Engineer Office of that destroyer from her commissioning in February 1947 until December of that year. He next had duty consecutively as Engineer Officer of Destroyer Squadron 12 and Destroyer Squadron 6 until detached from the latter in June 1939 for duty ashore.

Reporting in July 1939 to the Naval Research Laboratory, Anacostia, DC, he served there until December 1940. For the next two months he served as Aide and Flag Secretary on the staff of Commander Train, Patrol Force. He was transferred in February 1941 to similar duty on the staff of Commander Train, Atlantic Fleet, and served in that capacity after the United States entered World War II, until August 1942. In September he reported to the Newport News Shipbuilding and Dry Dock Company, Newport News, Virginia, for fitting out duty with USS Birmingham, and from her commissioning in February 1943, served for a year as her Executive Officer.

He received a Letter of Commendation with authority to wear the Commendation Ribbon, from the Commander, South Pacific Force, for “meritorious devotion to duty” while serving as Executive Officer of the USS Birmingham, while that cruiser was “subjected to enemy air attack during operations in the Solomon Islands area on the night of November 8-9, 1943…” he continued service in the Birmingham until detached in January 1944 to return to the United States.

A period of instruction from February to June 1945 included course at the Army Air Forces School of Applied Tactics, Orlando, Florida; Command and General Staff School, Ft. Leavenworth, Kansas; and the Naval War College, Newport, Rhode Island. From July 1944, throughout the remaining war period, and until December 1945, he had duty on the staff of Commander Seventh Amphibious Force. He was awarded the Legion of Merit with Combat “V,” for “exceptionally meritorious conduct…. As Chief Staff Officer and later as Commander, Administrative Command, Seventh Amphibious Force, during operations against enemy Japanese forces in the Pacific War Area from August 1944 to July 1945…. (in which he) contributed materially to the success of our campaign at Leyte, Lingayen and those extending from Luzon through the Central and Southern Philippine Islands and the Sulu Archipelago to Borneo…”

Ordered on January 7, 1945, Captain Chapman assumed command of USS General G.M. Randall. Under his command that transport operated as a unit of the “Magic Carpet” Fleet engaged in returning veterans from combat areas to the United States. Relived of that command of November 1946, he reported for duty in the office of the Deputy Chief of Naval Operations (Operations), Navy Department, where he remained until August 1947. He next had duty for two and one half years as General Plans Officer on the staff of Commander Western Sea Frontier. In March 1950 he reported as Chief of Staff and Aide to Commander Amphibious Training Command, Pacific Fleet.